How can I create an irregular, marble-tiles surface?

I'm trying to create a marble-tiles procedural texture for a bathroom's pavement like this: 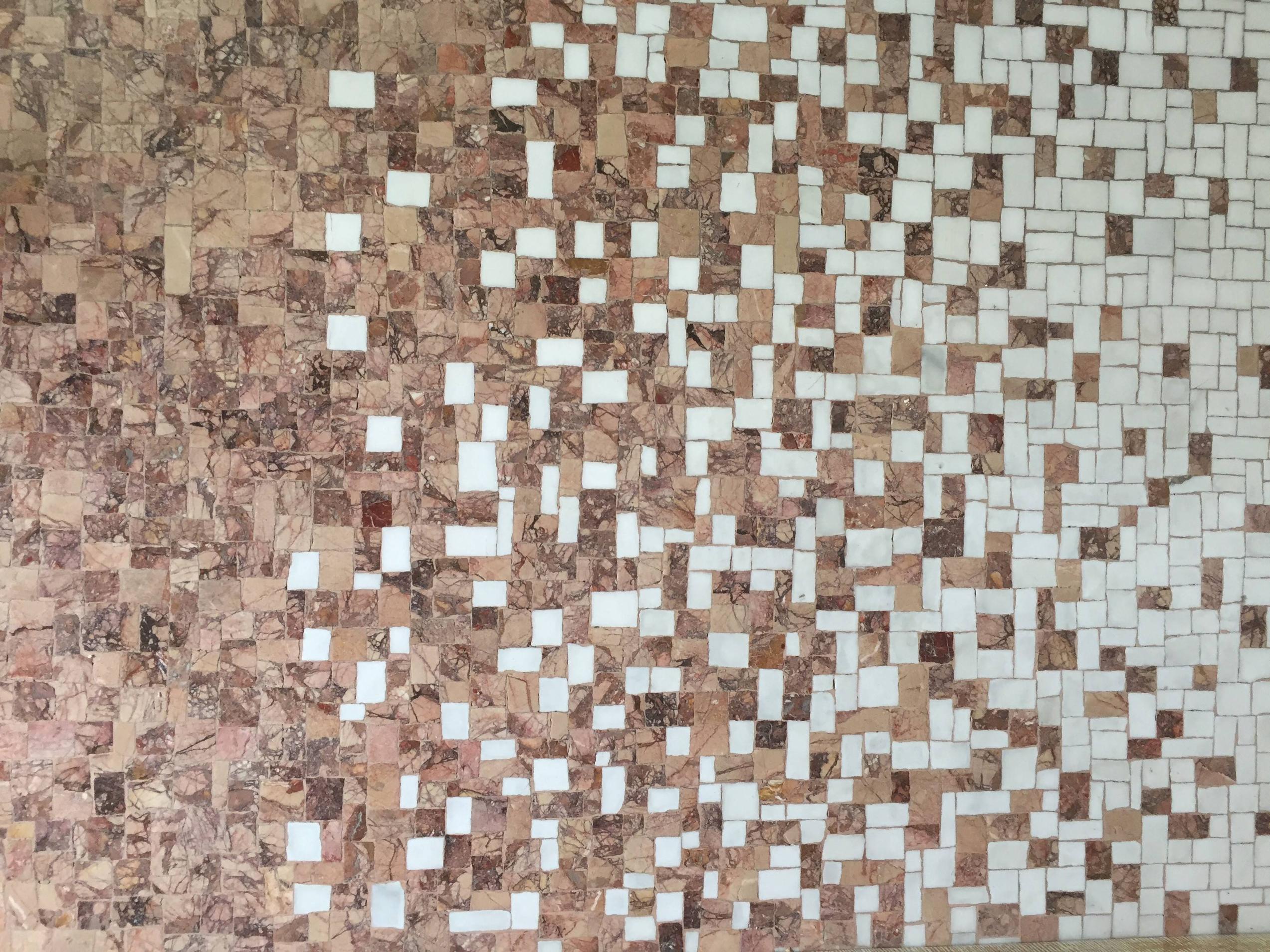 What I already did was creating the surface for the single tiles, but I can't get to do two things:

So basically I first created the reddish tiles' texture using this node structure: 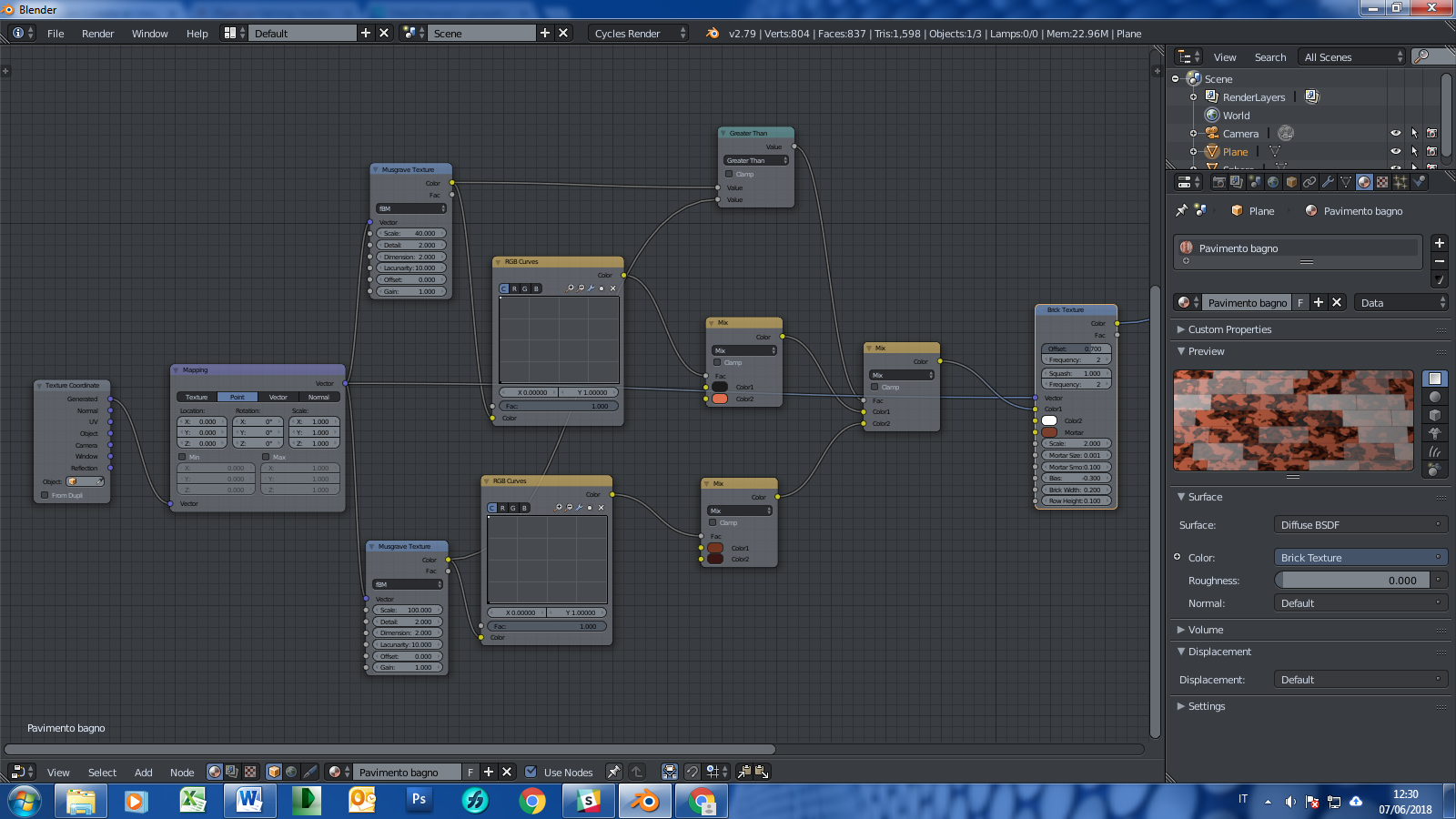 I then tried to use the gradient node to recreate the pattern of the real pavement, but the result is this: 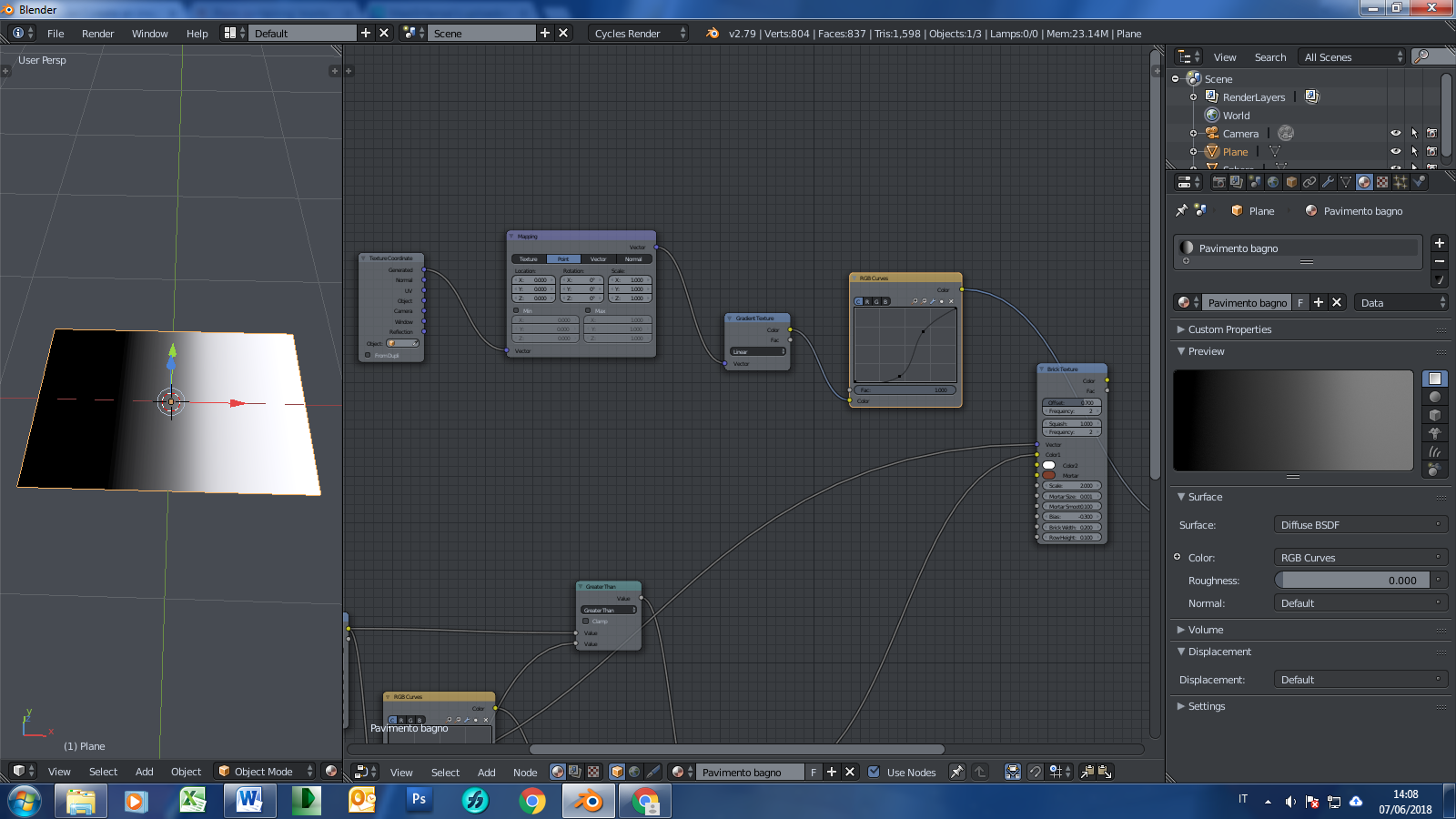 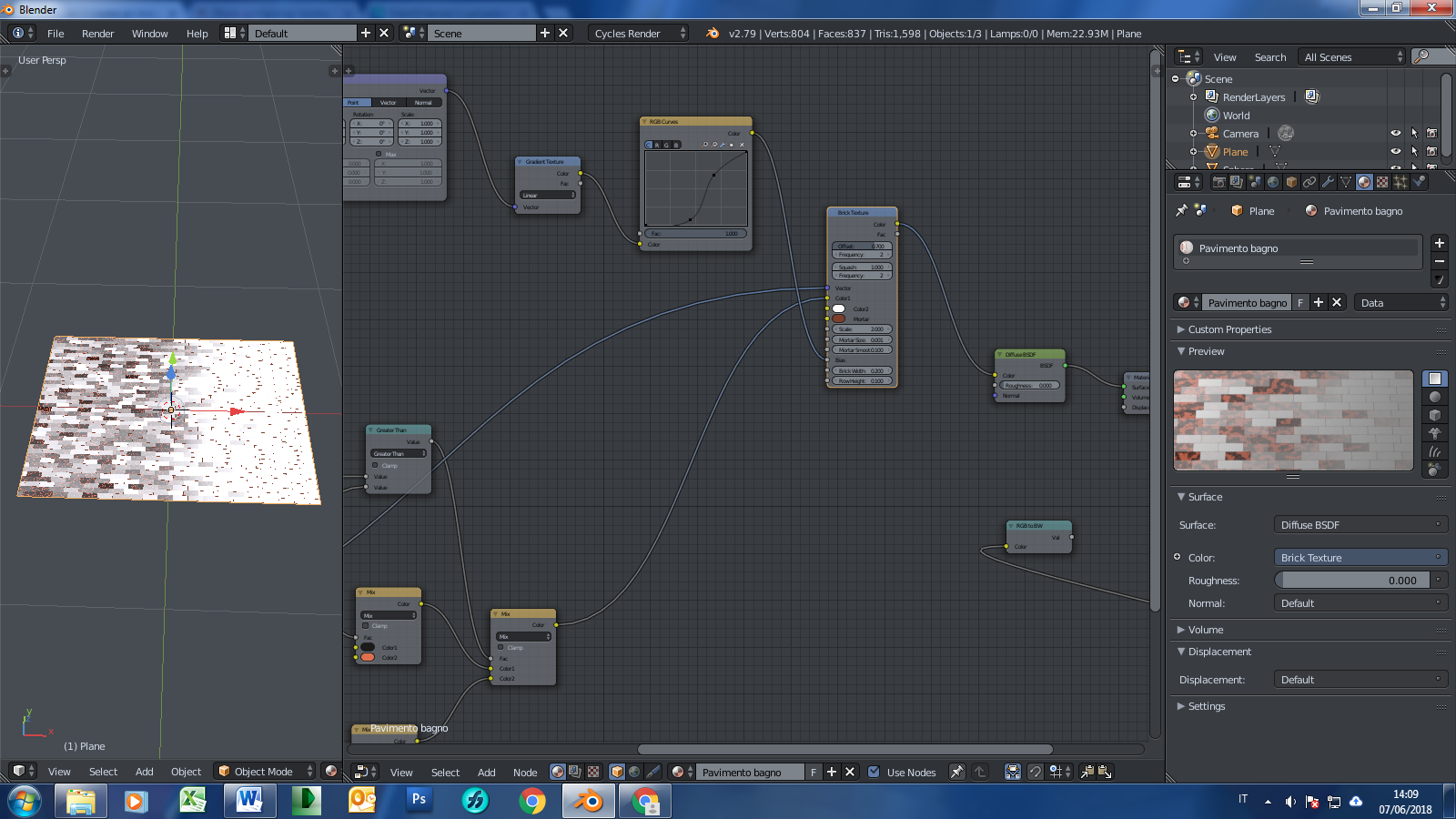 As you can see, I've linked the color channel of the gradient node to the bias channel of the brick texture node, but I don't know why the black part that should show ONLY red tiles still has some white tiles on it, something that does not happen with the white part. Besides, some of the red tiles are witheish, but I want only white and red tiles, not something in between, and I'm not sure why this happens.

For the asymmetrical mortar I still have no clue, I tried to use the wave texture and attach it to the "mortar size" channel of the brick texture node nut it didn't work so well. Any idea?

I achieved the brick fade/like effect, as well as some irregularities in the scale of the bricks, the node setup is below the test image 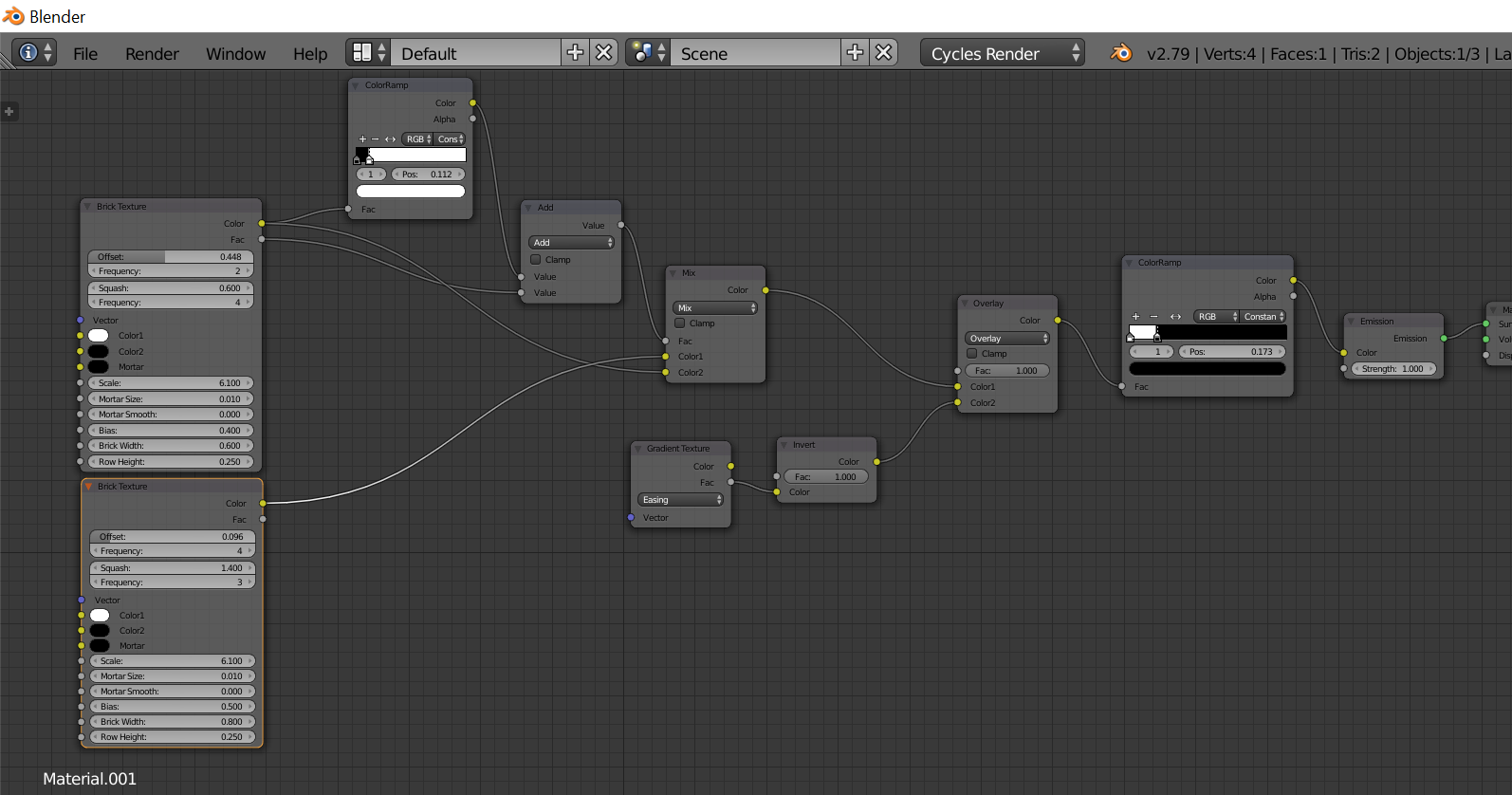 You can use this add-on as well to create more complex brick textures: https://blenderartists.org/t/cycles-brick-tricks-0-1/685934

To clarify 'why' It's because you have gray in your mixing image. The way masks work, you can have only pure black and pure white if you don't want a mix of the two.

Not the answer you're looking for? Browse other questions tagged cycles-render-engine texturing materials procedural or ask your own question.

6
Bevel a Procedural Texture?
7
Is there a way to change the mortar geometry of the Brick Texture?
0
How can I make this weaved pattern more realistic?
4
Does anyone know how to make a procedural random tile texture?
4
How can I create procedural tiles with uniquely seeded textures for each one? [Updated]