I've imported a model from the BodyParts3D database (http://lifesciencedb.jp/bp3d/) It's made up of a huge number of .obj files. These have a name based on the anatomical structure/organ: 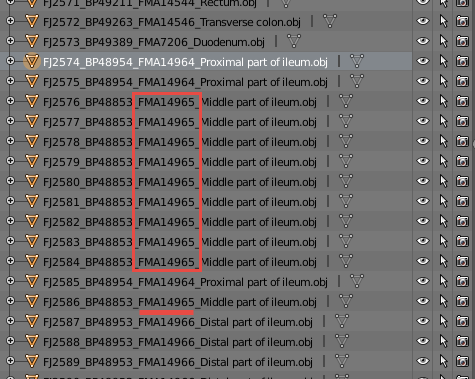 My question is whether it's possible to use a Python script to go through the objects in the scene and;

For #2, I've found this 'How to assign a new material to an object in the scene from Python?' which I could probably work out how to tweak to do what I need, but I don't know how to iterate through the objects in the scene and do a a search based on a text string

I'm new to Python, but ok in C# and other programming languages. Fairly new to Blender (mostly I work in Unity) Any help would be very much appreciated!

As you are already familiar with programming, and without a test file, will run thru an example. Use pythons String.split to split the name as is into a list using the underscore as a separator. If there are 4 members in the split etc..

33
How to assign a new material to an object in the scene from Python?

10
How to access mesh data of an object in a script?
14
Selecting and removing particular objects
2
Batch convert smd to fbx files
0
TypeError: 'Scene' object is not iterable
0
How to compile template_list with some object in scene 2.8
1
How do I edit an image node in blender using python
1
Identify root collection?
0
Getting the scene an object is in (blender 2.9)
0
python - Obtain list names used in a project (Noobie Question)