Help with "Cuda Error: Out of memory"

can anyone help me... I just wanted to do a quick clay render to see some shadow issues but I keep getting a "Cuda Error: Out of memory" message come up. I'm running the render off of my GPU which is an 8GB 1080 GTX so I cant really image a problem.

I turned off caustics and put the samples at 64 and still I'm getting the error. Would anyone be able to offer any advice and maybe try the render with their PC?

Your scene contains some incredibly high amounts of subdivision. You can see in the stat readout above the scene had reached 6.7GB of memory use. (the remaining 1.3GB was probably lost to overhead and OS). Even just in the viewport, your scene is almost 15 million triangles. And several objects have higher render subdivision than viewport subdivision, resulting in even more geometry at render time! For example, you have a number of objects with a modifier like this: 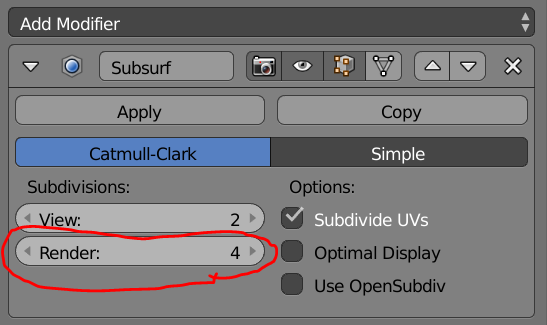 Most objects in that scene are not going to look substantially different with reduced subdivision. The "door" and "body" objects might need one more level than they have in the viewport, everything else looks fine just at the viewport level it's currently set to, or even lower!

Not the answer you're looking for? Browse other questions tagged rendering gpu error or ask your own question.

7
Blender render crash when using subsurf modifiers.
5
How do I know the number of polygons after adding a subdivision surface modifier without applying it?