I'd like to know how to make my car wheels rotate when a vehicle is moved forward in the local Y axis, regardless of what rotations on other axes the car may possess. This should specifically work with an armature.

Normally or most often, people do this with simple drivers. 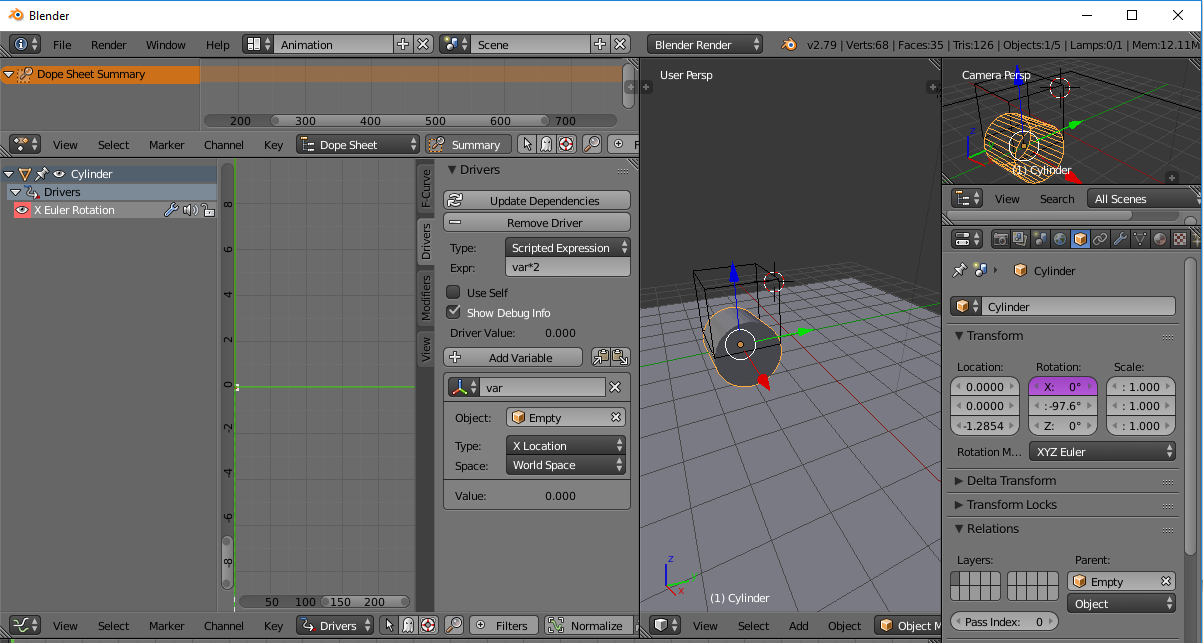 Eventually using these principles a car might look like this then And one could rotate the z axis of the wheel using a modifier (copy from z rot of the small (green) bones above it) so inner wheel would turn more as compared to the outer wheel. In Below a simple car with 4 wheels and a armature to stear it all have the empty cube as parent. In the below example i let the small bones "track to" the front bones to get more realistic stearing Using bone constrains, but you might also just take rotation from a single bone armature. 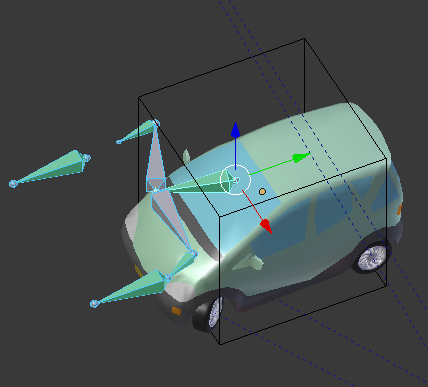 The constrain on the wheel to copy its Z rotation from an armature bone The armature has not been bound to the mesh itself with automatic weightpaint, its a simple setup. As everything is parented to the empty cube wheels will stay in place. 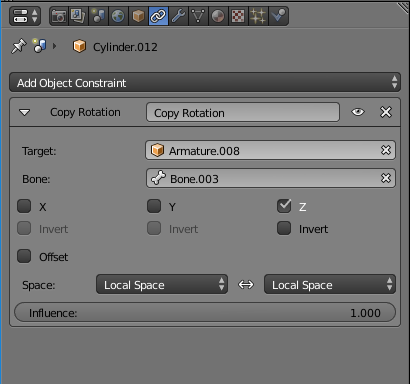 You cannot easily do this, because it is impossible. @Nathan is right, but I'll add here my explanation:

When moving the car in the scene, you want the wheels to correctly follow - let's move the car 2 different ways:

In first example the wheels traveled longer distance, yet the end car position is the same.

Without Blender accessing and knowing what the path was, it is impossible to compute the wheels rotation, because it can be anything based on how the car was manipulated. When you interactively move objects in the viewport, Blender does not store your moves. The bones only remember their rest and their final (pose) position.

The easiest and most common method would be to use the path. How to setup a driver that rotates the wheel is here:

How can we animate a ball rolling over a path?

It's convenient to offset the curve for left and right wheels and setup both sides separately, so they rotate correctly when turning.

This is actually one of those problems that sounds simple but is very tricky and poorly defined. And understanding why that is is very important.

Here I have a bone that I have moved in its local Y axis from the origin. How far has it moved in that axis? 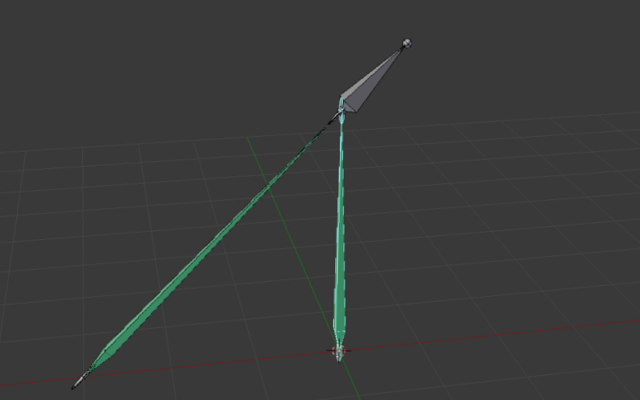 Don't bother, they're both wrong. 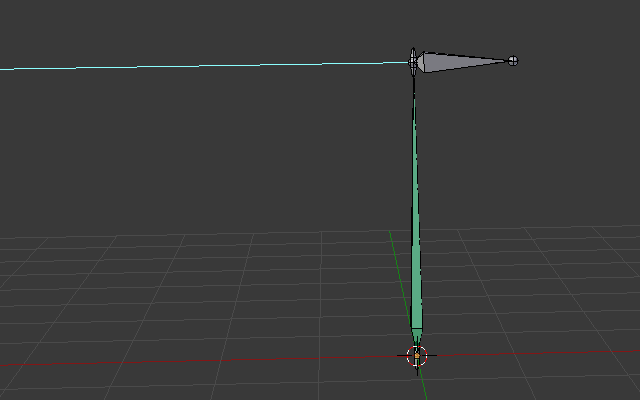 Check it out. Here's the same bone, rotated to be run parallel to its undeformed XZ plane. How far has it traveled in its local Y axis? For the second option, the projection to the origin along its local axis, it has traveled an infinite distance.

When it comes to the way Blender stores bone transformations, it always takes the attitude that the bone first moved and then rotated. (That's probably because of some of the details of the math involved.) Because of this, when the bone rotates, the axis of its motion changes.

I saved the closest answer for last, because I wanted you to think about how this problem gets defined. 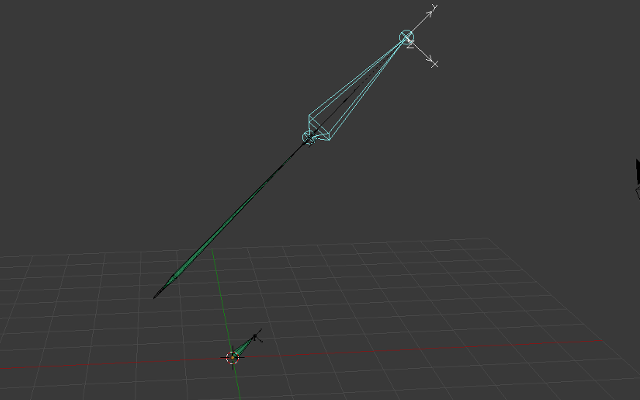 In this case, what we have is the projection along the local Y axis to the plane with the same rotation as the bone itself. This still might not be what you want. Because check out what happens when we rotate the bone: 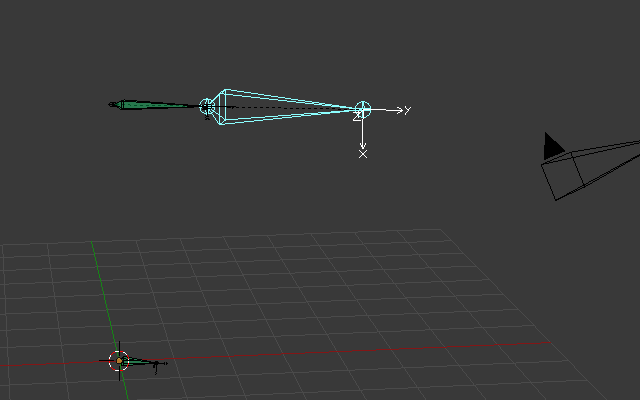 The distance that the bone has moved along the Y axis changed. Even though the bone itself didn't move. That means that what's going to happen if you use this measurement of local Y translation is that your wheels aren't just going to rotate when you move in the local Y axis (although they will do that reliably), they will also rotate when you rotate the bone-- because rotating the bone changes the distance that the bone has moved. At least in this measurement. (The only conceivable one where it doesn't, that's the first option way back at the beginning.)

Now, maybe that's what you want. So I'll explain how I made this model.

Now, you can use a transformation constraint that translates the Y scale of this bone into the rotation of another bone.

Caveat: Transformation constraints don't play nicely with negative scales, so if you move your control bone below the plane, the wheels will spin in the wrong direction.

9
How can we animate a ball rolling over a path?
11
A way to get Rate of Change in translation or rotation into a shader node
0
Rigging a Wheel to Turn Corners: Drivers vs. Bones
1
How to rig a BB-8 Model?

2
Bone local coordinate adjustment
1
how to create a single-direction IK leg with a direction controller?
2
Eye Limit Rotation
7
how to rig this object (function compass)?
0
Making a bone match another bone's rotation on a single local axis
0
Local Space does not work with Transformations Modifier
0
Making a bone rig for piston
3
How to Flip Rotation from Positive to Negative?