Mirror modifier is not working, no mirrored object?

I'm learning how to use the mirror modifier and I am having some trouble. When I apply the modifier to my object I don't see a mirrored version of it. What am I doing wrong?

The mirror modifier mirrors the object around the object origin (the yellow dot in the center of the cube).

Since the origin is in the center of the cube, the mirrored half is the same as the existing geometry of the cube, and no change is apparent.

If you move the cube in Edit mode (which won't move the origin), you'll notice the cube is mirrored as you might expect: 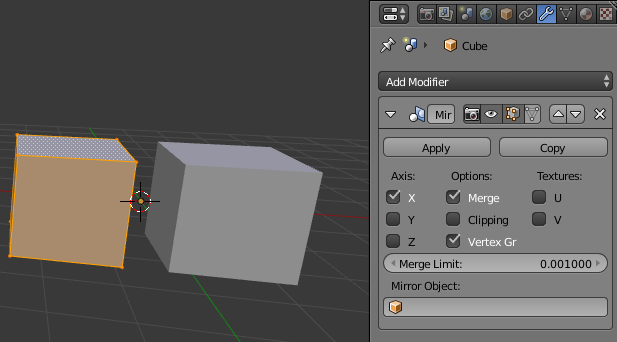 Note that in addition to moving the object origin (CtrlAltShiftC) where you want to mirror, you can specify a Mirror Object:

This will use the origin of the specified object (usually an empty) instead.

Not the answer you're looking for? Browse other questions tagged modeling modifiers mirror or ask your own question.