How can an image be posterized in the compositor?

I tried to split an image RGB values and re-combined it with rounded values in order to reproduce the results described in this BA Thread.

But instead of a posterized image all I get is an almost black image. Why is that? 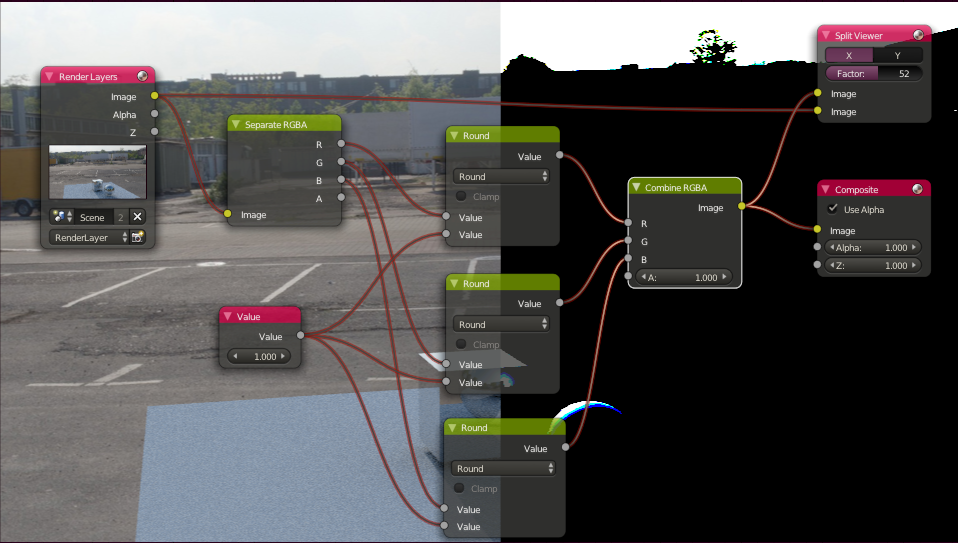 The issue was that I loaded an HDR image, with standard images it works as 3pointedit pointed out the value should be reset (I just tried several values before the screenshot was made).

If you are replicating the setup on my BA thread http://blenderartists.org/forum/showthread.php?244118-Cool-nodes-I-didn-t-know-about

As far as I can tell, https://docs.blender.org/manual/ko/dev/compositing/types/converter/math.html says the Round node doesn't use the second value for anything, and you have to multiply all three color channels by the cube root of the number of colors you want in the finished image, then round them. I think you might need to divide them by the cube root afterwards.

18
How can I resize/move the “canvas” of an image in the compositor?
3
Adding background to the landscape and mixing with mist
3
Can I use Compositor to colorize image?
2
Compositor won't load image!
12
Blender halftone pattern filter
1
How to add image into compositor?
3
Some pixels doesn't render on the image ID MASK
0
Only one object has bloom when Z combining