So I'm learning Blender 2.78 and am... definitely still a total newbie at this point, honestly, the depth of functionality in this program is HUGE. My problem, however, is fairly specific, and is proving rather intractable, so I figured I'd give it a shot here.

Long story short: I am working on a custom model that I'm planning to export from Blender to XNALara, and the export script I'm using keeps breaking on one specific model with the error "AttributeError: 'NoneType' object has no attribute 'filepath'", which I understand to be the Python equivalent of attempting to read a property off a null value. So I track back through the source code and find this line:

So, it would seem I somehow have a textureSlot which has an entry and a texture value, but not an image.

The problem is... all of my texture slots for this object have images?? 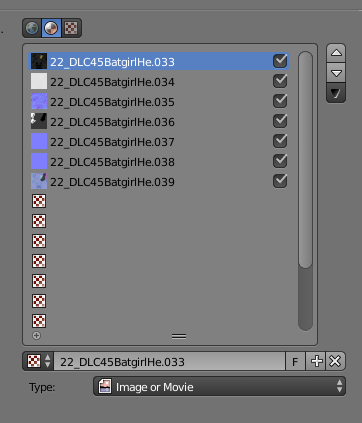 I've googled around for similar issues before and saw a different export script where someone had run into this sort of issue due to a glitched texture slot. I have combined and split this mesh with a few other objects at various points, and while I thought I had fixed the textures after doing so (every single texture on that list definitely belongs with the model), something is clearly broken. Unfortunately, I just don't know enough about what's going on here to fix it. I've tried adding and clearing the texture slots, to no avail. I can't even figure out which texture slot is broken because I don't know enough about Blender 2.78. I'd really rather fix the model than try to update an unfamiliar script in order to try to skip broken texture slots.

Has anyone run into a problem like this before? Am I correct in my thinking that there's probably a broken texture slot? And if so, how do I determine which texture slot is broken here, and how do I fix it? I'm willing to upload a minimal .blend file with only the helmet if that will help.

texturing export
Share
Improve this question
asked May 5 '18 at 1:31

I figured it out. As I mentioned above, I'd joined and split the mesh a few times in order to better fit other mesh parts to the helmet, and when doing that, I'd left old materials attached to the object. I went into the material editor, removed all materials that did not appropriately belong to the object, re-exported, and it worked fine.

Not the answer you're looking for? Browse other questions tagged texturing export or ask your own question.

1
Wavefront export with [Vertex/texture-coordinate/normal] face definitions
0
Adding a new image texture slot to a particle system in Python
0
How to see several texture slots at once? (cycles)
1
How to get absolute file path for linked texture image?
0
Blender export as dae file contains broken 3D render