I'm trying to make a galaxy in blender. If I use an image of a galaxy to get the spiral shape it becomes a 2d image projected into the 3d volume. To avoid this I wanted to use a procedural method, but I can't figure our how to get a spiral shape. I've tried searching this and I don't get any results similar to what I'm looking for 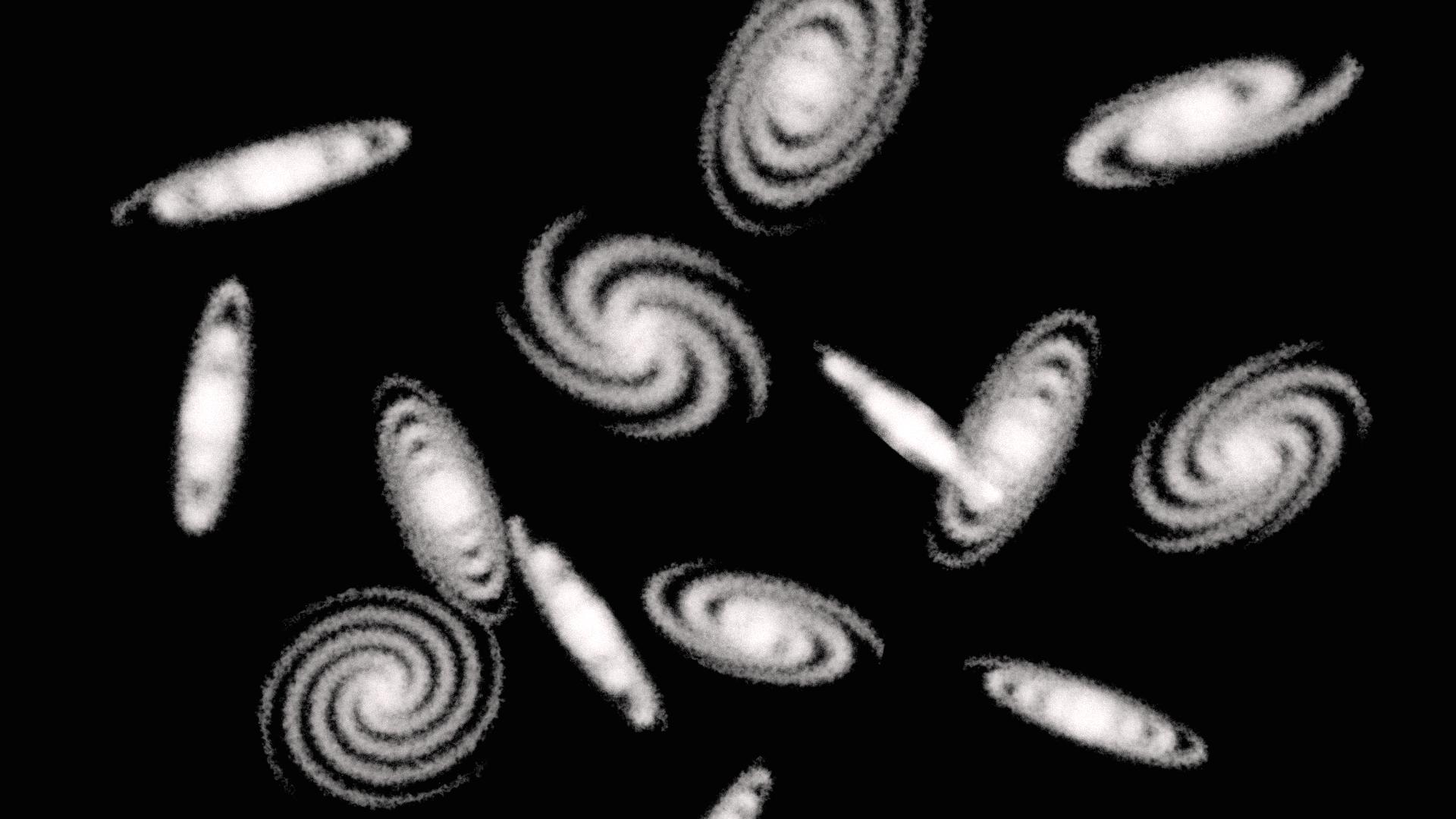 One method is to create a volumetric cylinder and distort it by rotating it around the origin by an amount that varies based on the distance from the origin.

First, create a volumetric cylinder. This is achieved by calculating the distance from the origin in just two of the three dimensions (it's effectively a circle projected along the remaining axis). This can be achieved using the Dot Product vector maths node using the following arrangement (assuming the cylinder is to be produced along the 'y' axis) : 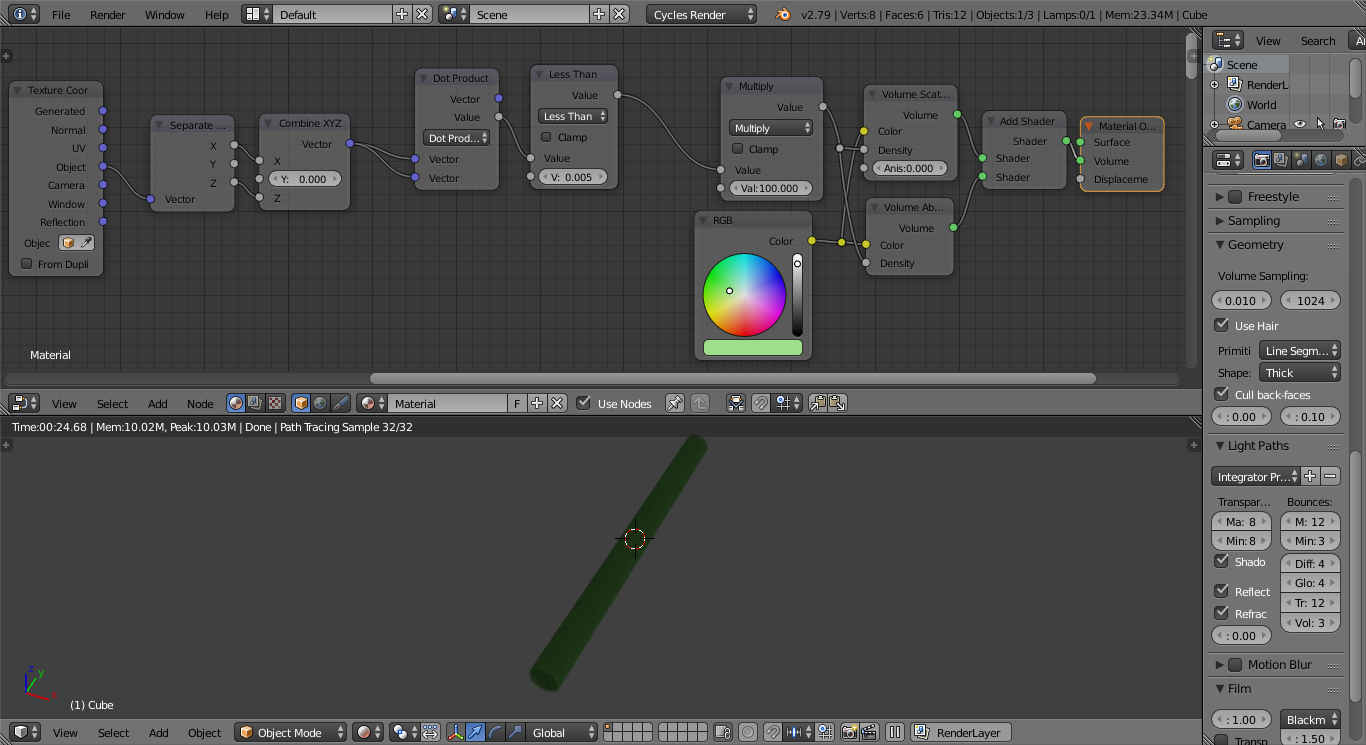 The Dot Product used in this way (with the same vector on both inputs) produces the square of the length of the vector. The following Power(0.5) node calculates the square root of the squared length - ie, the actual vector length. The Less Than node controls the radius of the cylinder.

NOTE : The Geometry Volume Sampling step size has been decreased to 0.010 in this example in order to improve the volumetric precision (at the expense of render time). Also, the Light Paths Volume Bounces has been increased from zero to 3 to allow multiple scatter bounces (see the properties panel at the right-hand side of the image).

Since we already know that the 'y' coordinate is irrelevant (since the cylinder is unchanged regardless of where along the y-axis it is viewed) we can simplify this by only actually needing to calculate in the X coordinate. This is therefore achieved with the following additional nodes : 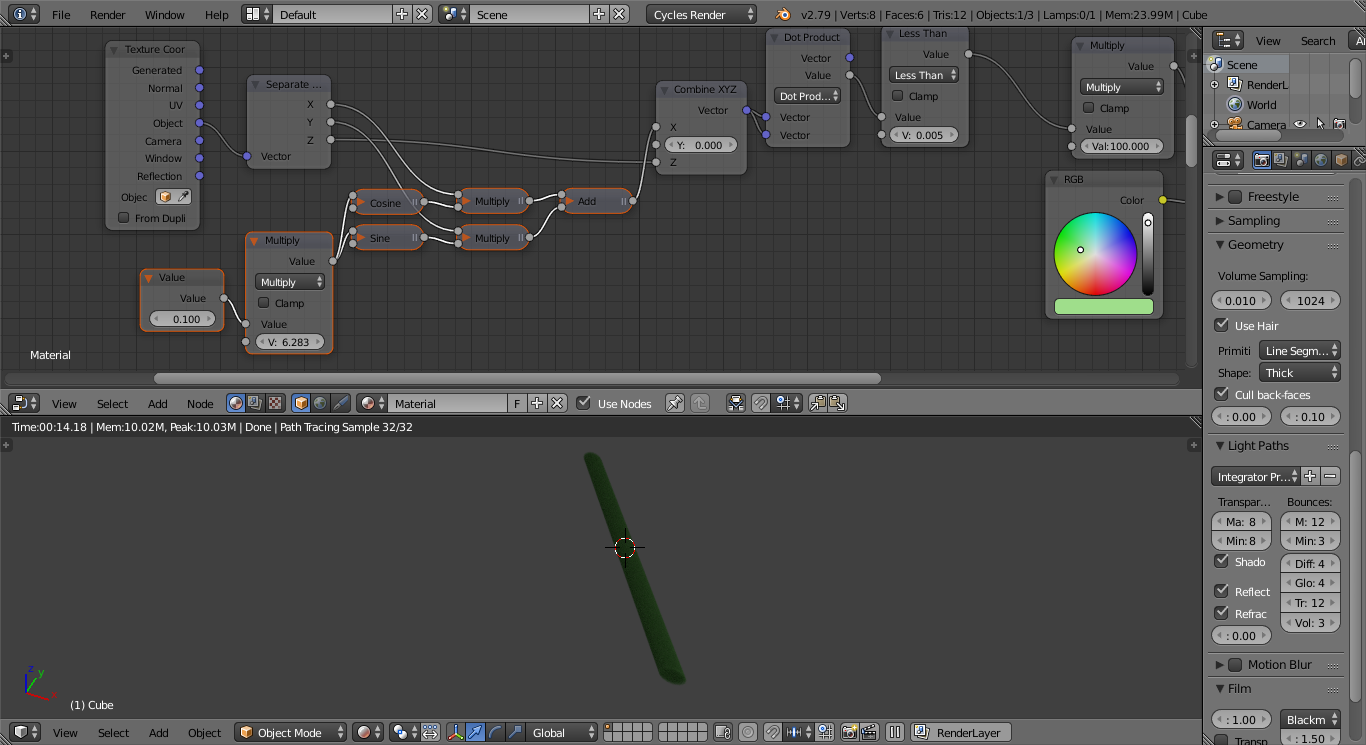 NOTE : Varying the Value input node rotates the volumetric cylinder. The Multiply node multiplies the input value by 2*pi, converting the input value to radians - so 0.0 to 1.0 produces one whole rotation.

To produce a spiral we can simply vary the rotation based on the distance from the origin. This can be achieved with another Dot Product/Power node combination with the following additional nodes : 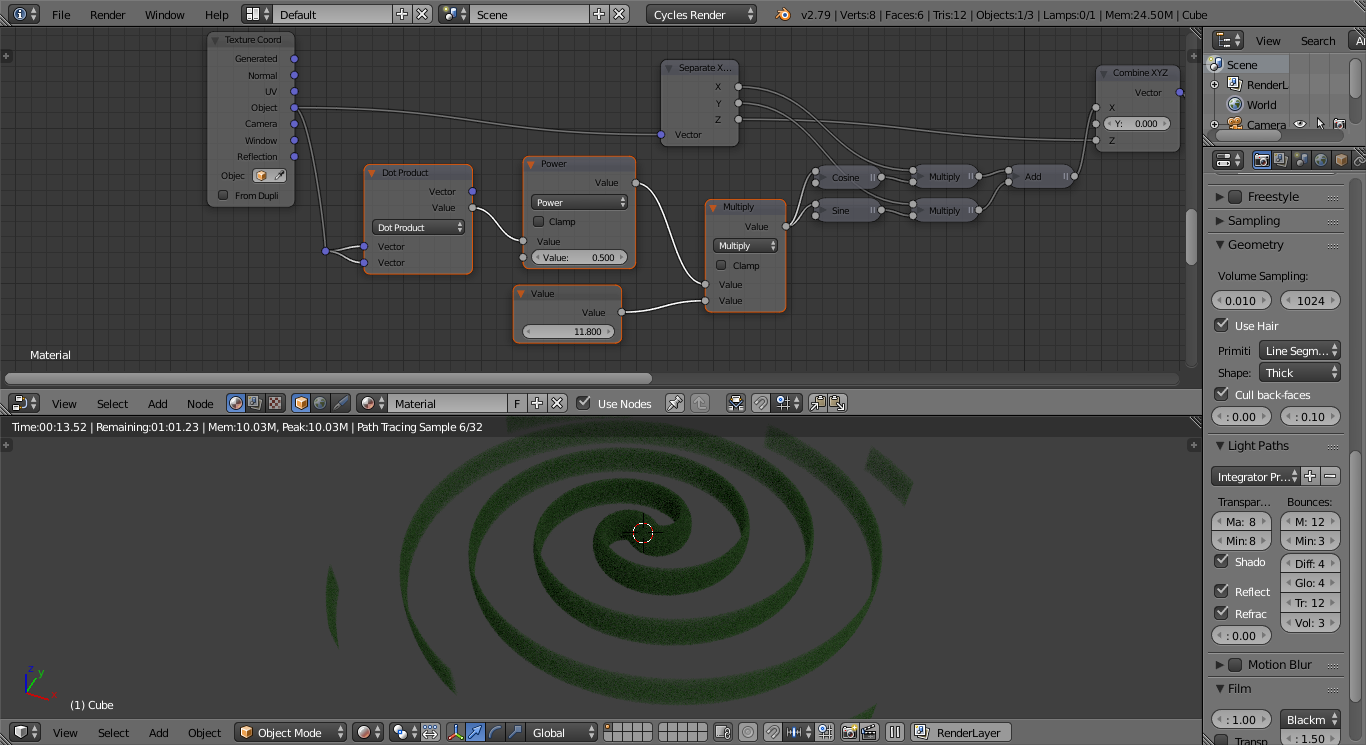 Increasing the Value input varies the number of turns of the spiral.

Note, however, that the spiral is stretched into a thin ribbon as it is rotated. To counteract this we can simply add additional nodes to vary the thickness of the original "cylinder" based on the distance from the origin : 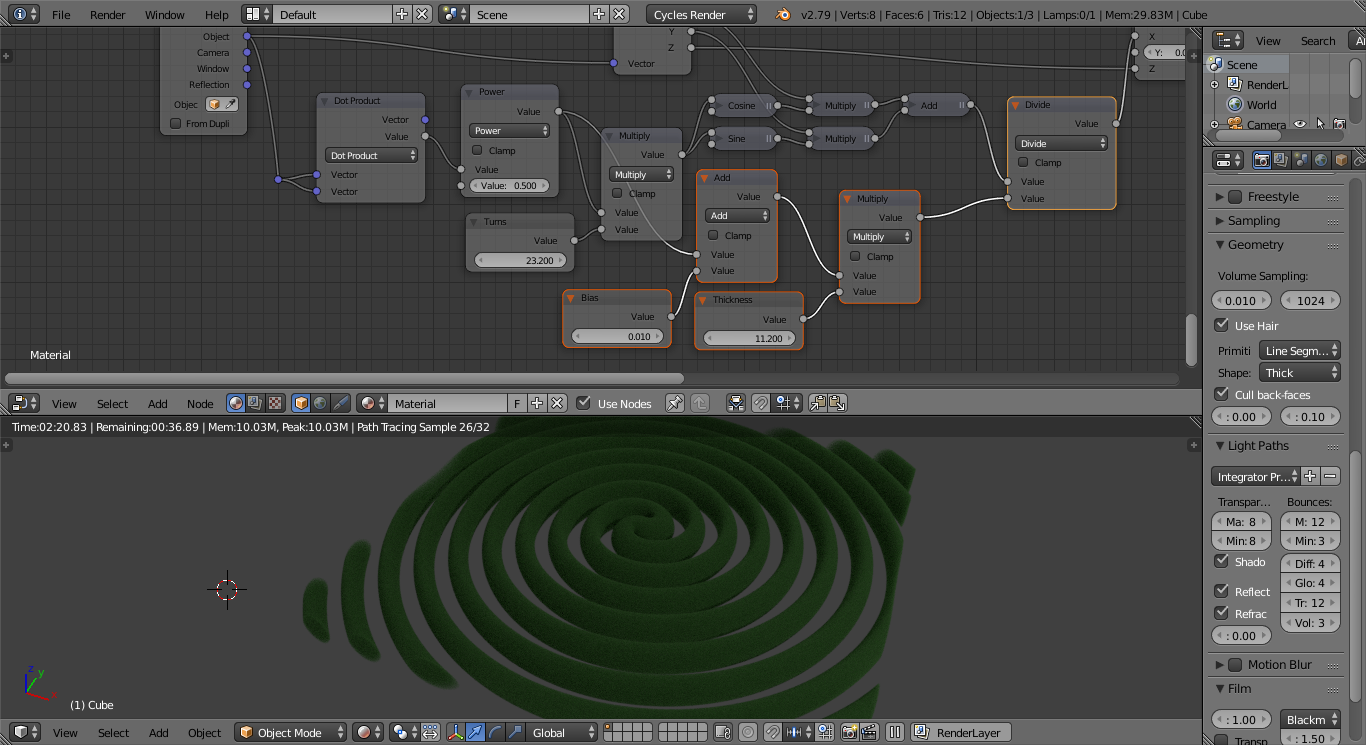 Thickness controls how much the cylinder is scaled based on the distance and Bias controls the starting thickness at the centre of the spiral (prevents it collapsing down to a point).

Note that this is a very much "brute force" method of generating a spiral - and it can only produce a spiral with two "arms" (unless you were to truncate the spiral at y = 0 - in which case it would have a single "arm").

Another approach is to generate the spiral directly - rather than distorting a cylinder - by calculating for each 'sample point' the closest point that lies on the centreline of the spiral. Calculating the distance to the centreline of the spiral allows us to determine whether that point lies within the spiral. This produces more versatile results and does not require manual adjusting of the thickness. It can also generate spirals with any number of 'arms'.

To achieve this we need to be able to calculate the closest point on the centreline of the spiral. For any point in the volume we can determine a number of things about this 'closest point'

Firstly, the angle to the origin - this can be calculated using standard trigonometry using the arctangent, since tan(angle) = x / y so atan(x / y) = angle. This will only give a result over half the rotation before repeating for the other half, so we need to include additional nodes to add 180 degrees (or 'pi' radians) for the second half of the rotation - ie, when the sign of the y-coordinate flips between positive and negative. This yeilds the following nodes to determine the angle from the coordinates :

The modulo function is used to determine which rotation around the spiral arm is the closest to this point and this, adjusted based on the angle (calculated as above) gives us the point on the spiral that is closest to this sample point in the volume.

We can add in some nodes to allow the results to be adjusted (eg, varying the thickness based on the distance so that it thins out towards the ends of the arms) and this produces the following material : 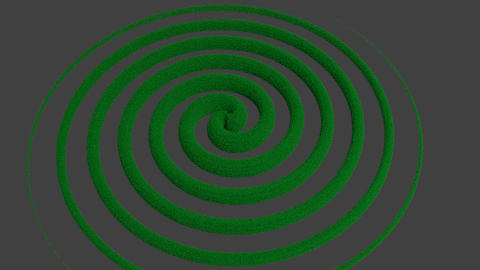 To make it easier to reuse, we can create a node group that takes the vector in the volume, the desired properties of the spiral (number of "arms", "twistedness") : 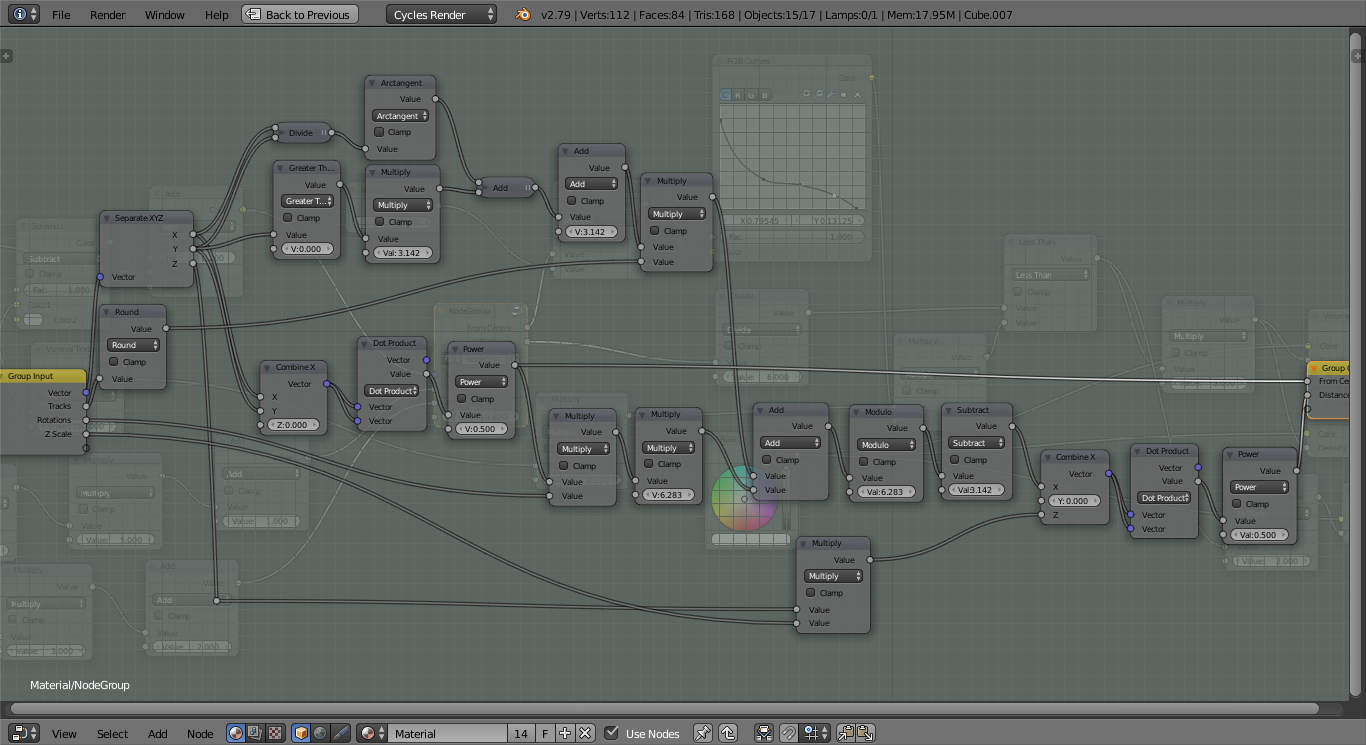 This can be used as follows : 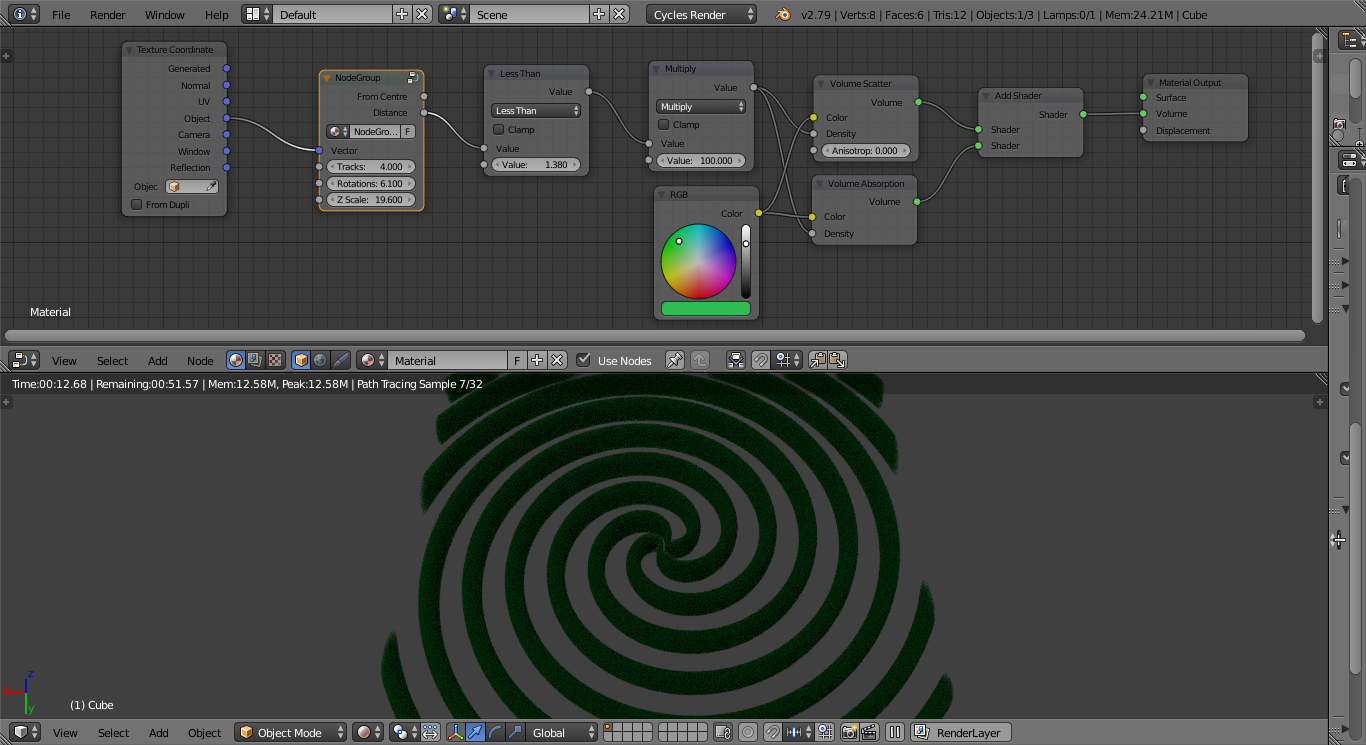 Now you have a configurable volumetric spiral, the only remaining challenge is to use this to produce a believable galaxy : 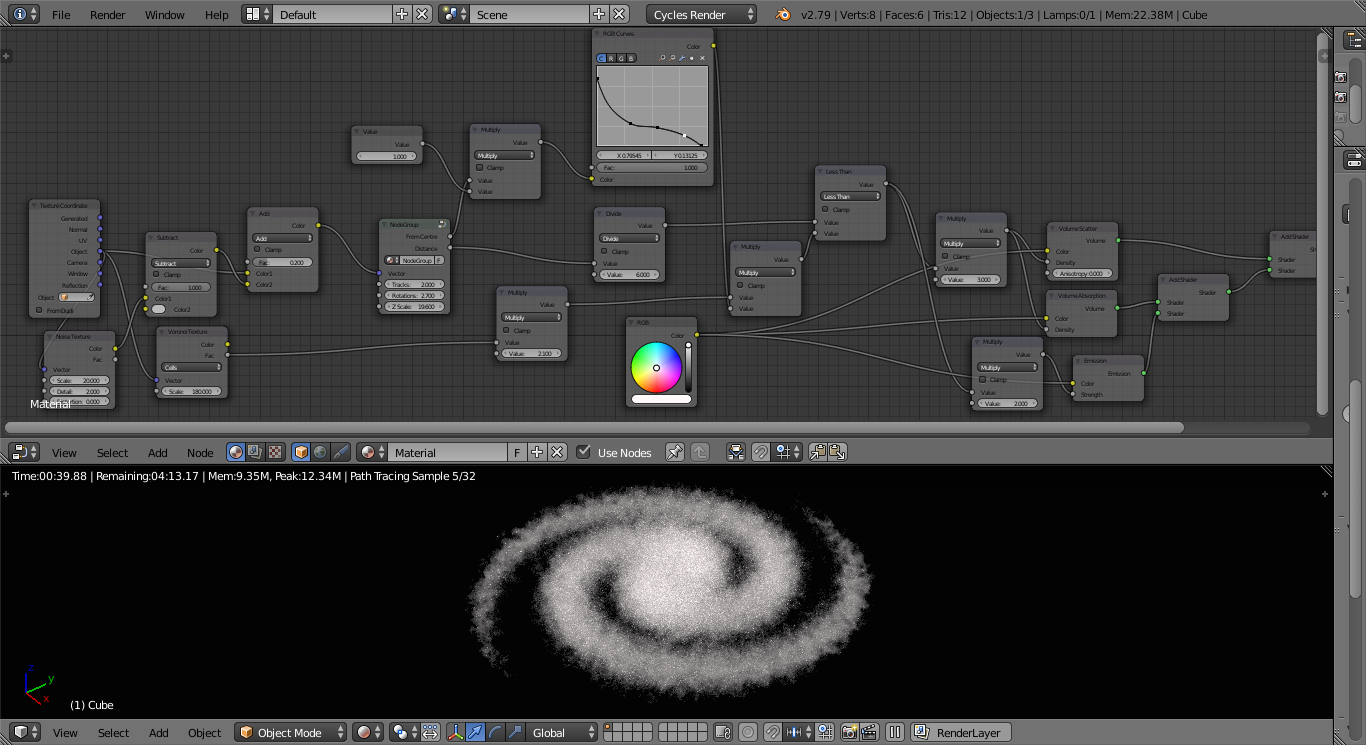 To make each galaxy different we can use the Object Info 'Random' property to generate the spiral properties to produce the following result : 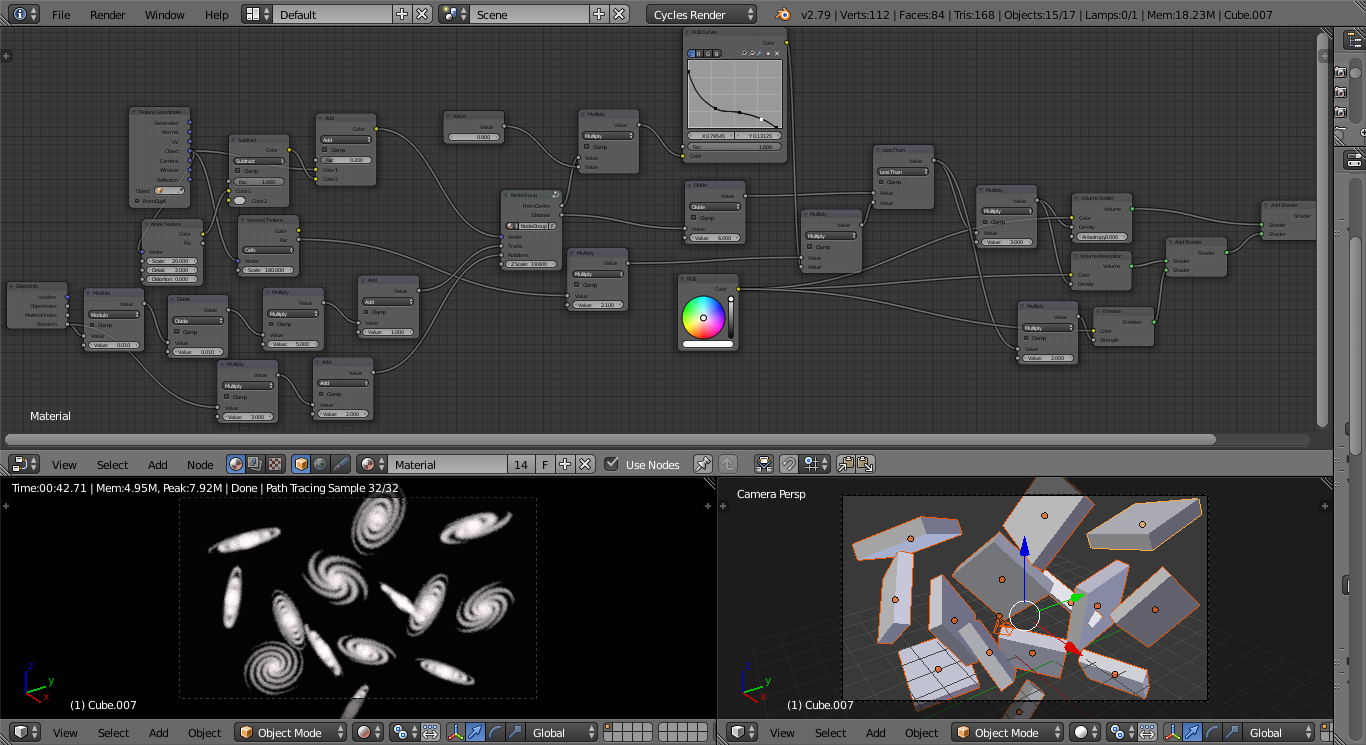 This is the closest I can get to a spiral with only nodes.

I am sure there is some math functions that could help but that is out of my realm.

I just use a wave texture to form the rings and had the mix shader mix in transparency with another wave texture. Its not exactly a spiral but maybe it can help.

I didn't try, but maybe you can add a 2nd mapping node and offset one of the wave textures and see if it "cancels" out some of the rings that make it look like more of a spiral. Just a guess. 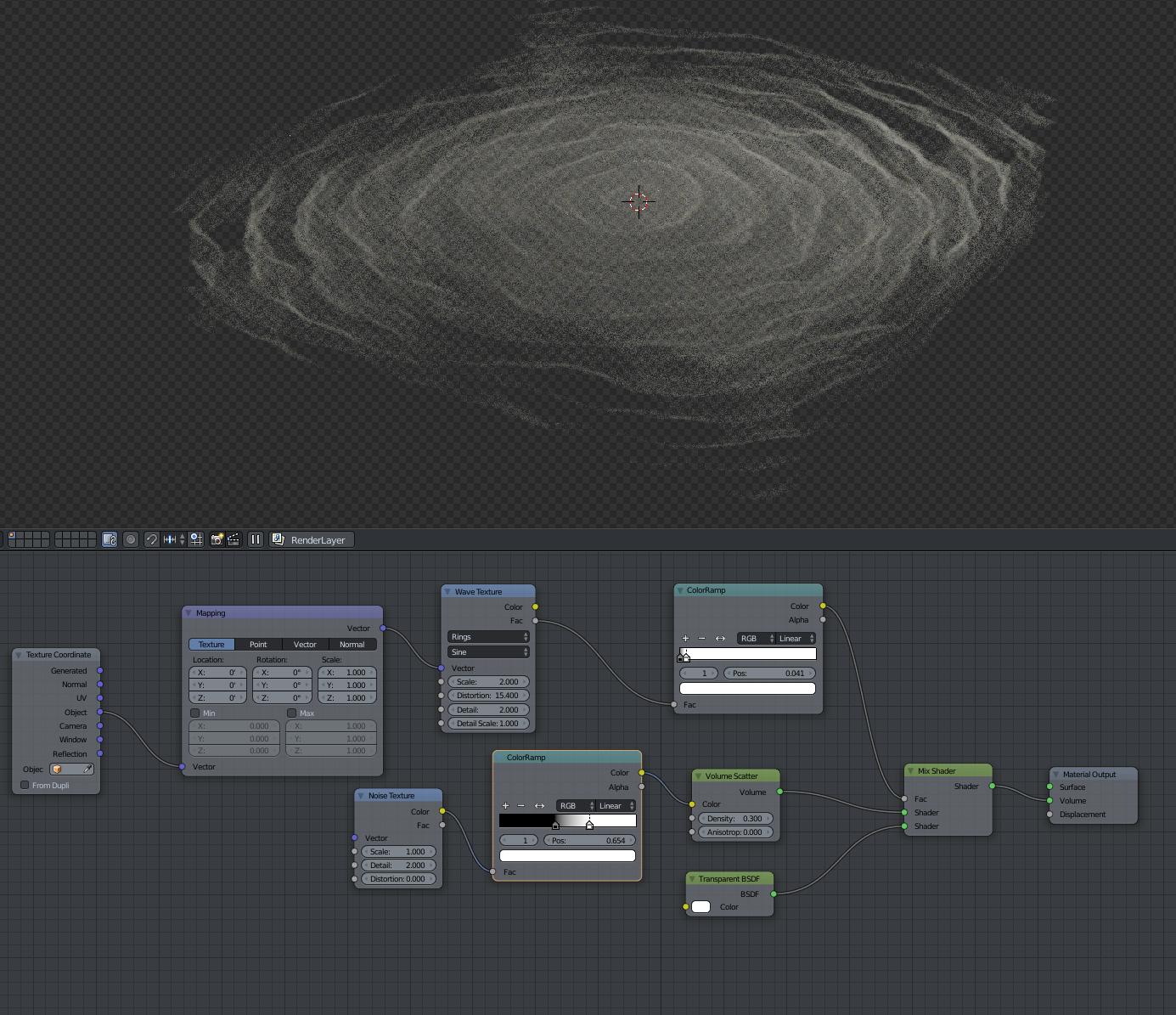 Not the answer you're looking for? Browse other questions tagged cycles-render-engine node-editor volumetrics mathematics procedural or ask your own question.

7
How to Twist a Procedural Material?
5
How to twist radial vector to make spirals?
1
How to create spiral in blender?