What settings should I use in the Key node if the green background is very uneven?

The original title of this thread was: "Why is alpha-over node not as good as in the VSE?" and I think the best answer to that is from @troy_s:

Since then the discussion has moved on to Key node settings, so I am changing the question. For reference, the original post follows ...

I am making some video presentations of student art work, where the students are keyed over their art.

I started by saving the keyed "talent" as .png sequences and using the VSE to overlay that on top of the art. 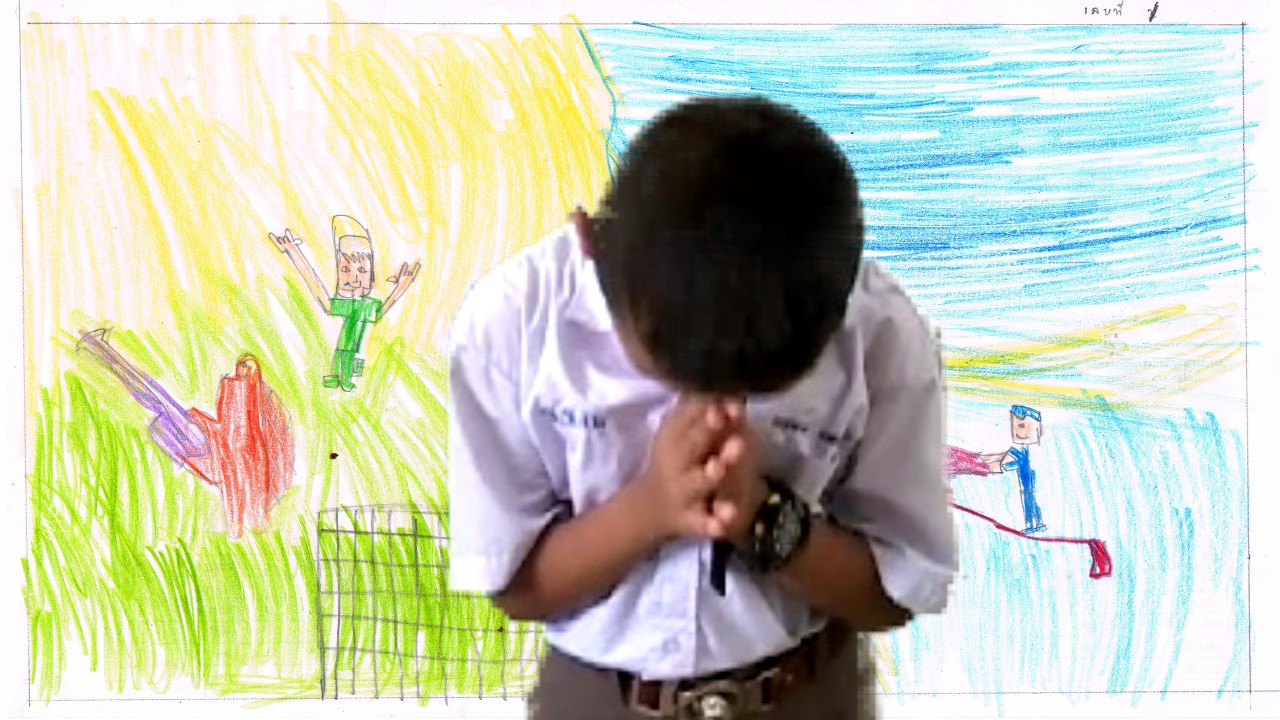 This is acceptable considering the video was taken with a tablet, using green corrugated PVC board as a green-screen.

But the process is very time-consuming and I have about 600 shots to do!

So it occurred to me that I should be able to put everything together in the compositor to make it more efficient.

However, the Alpha Over node in the compositor is making parts of the "talent" transparent. 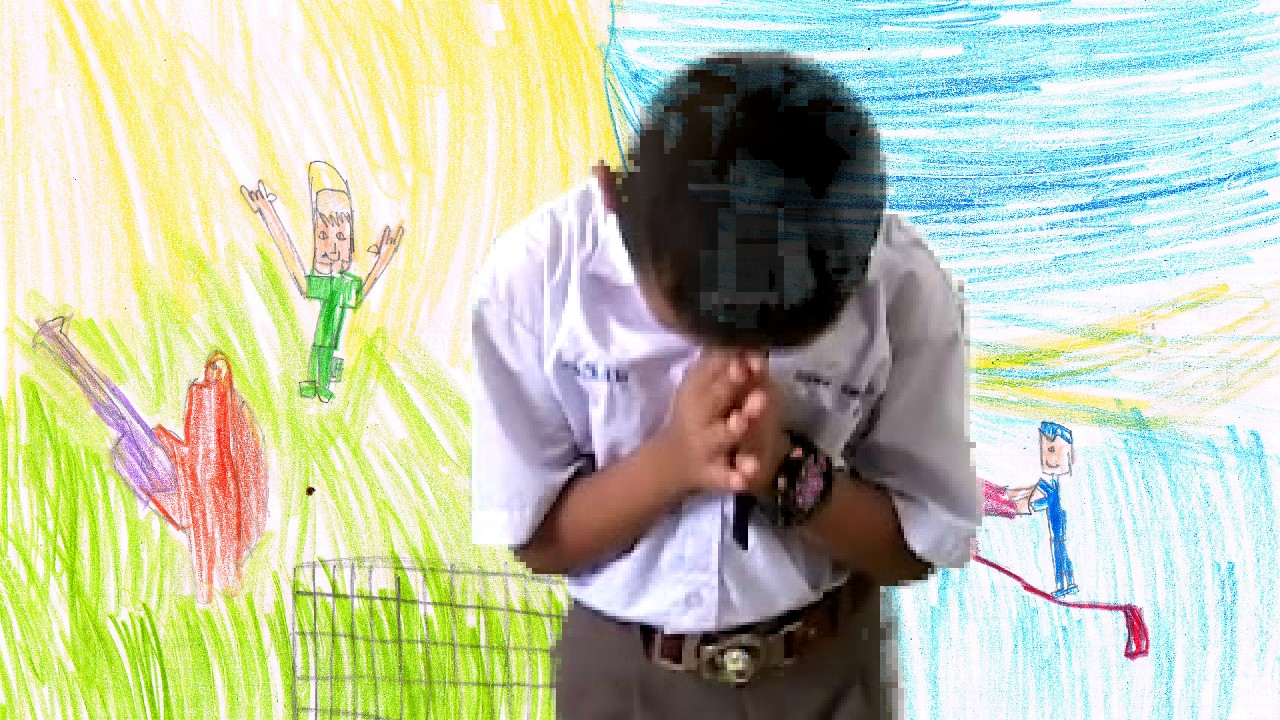 At first I suspected the output from the Keying node. Somehow, it might not be the same as a .png file. So, to trouble-shoot, I tried using the same frame from the .png image sequence instead of the direct output, but the result is the same either way. 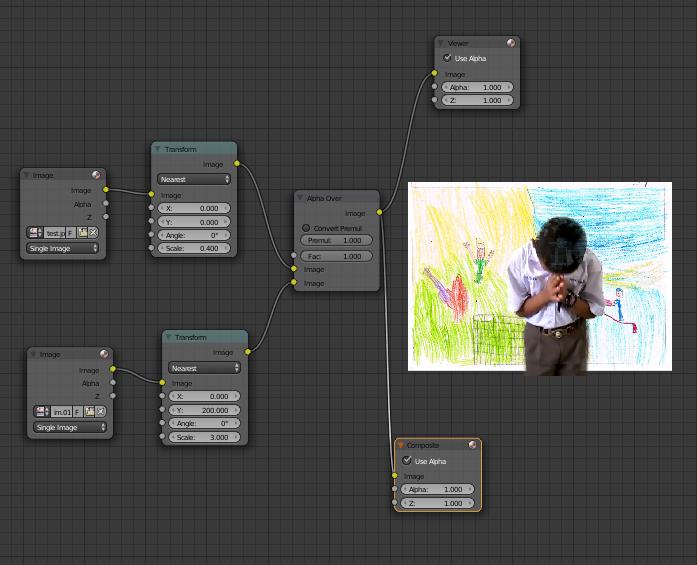 So, before I go back to saving everything as .png sequences, can anyone tell me a way to get the Alpha Over node to behave the same as the Alpha Over VSE effect?

Thanks to @cegaton for getting involved. Here is the .png image. 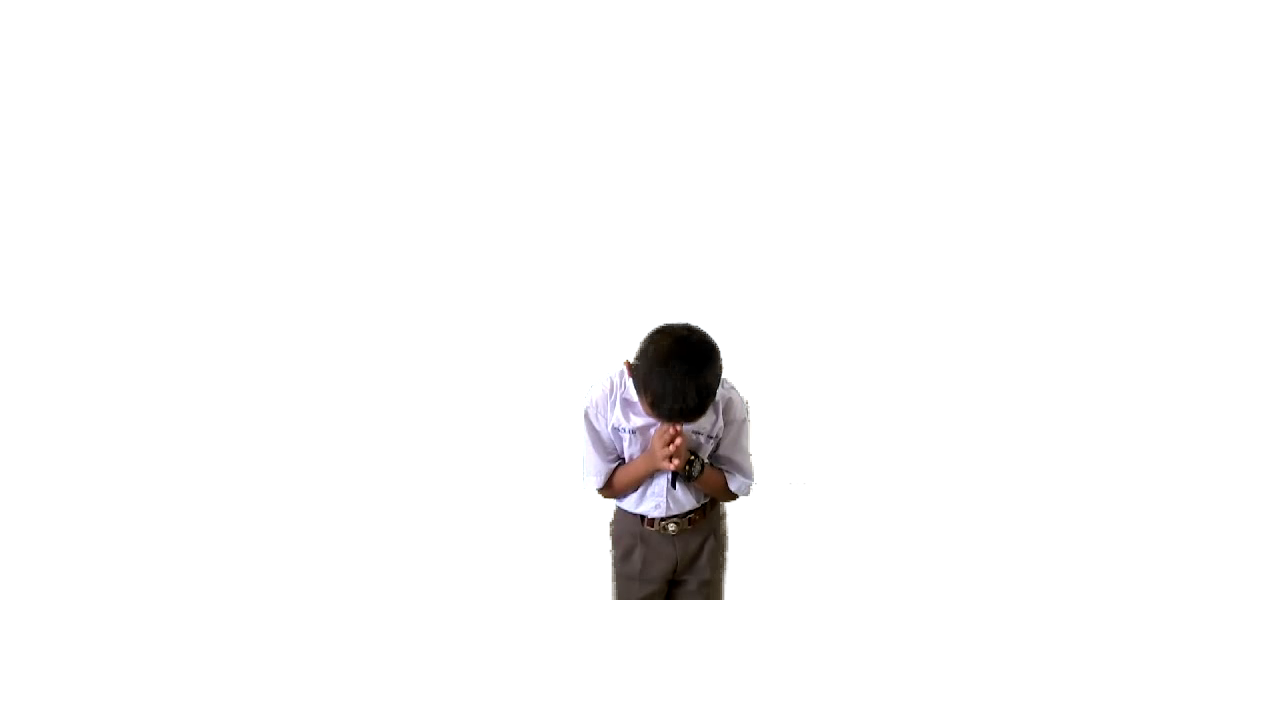 And here is the original node setup before I started trouble-shooting. 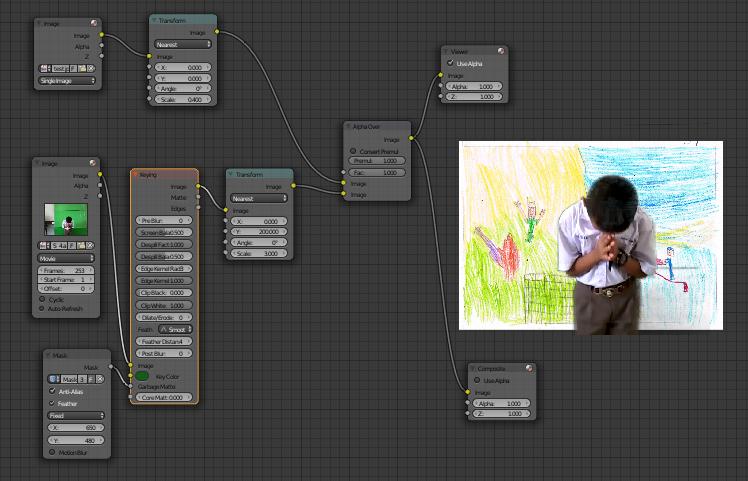 I really can't see how the .png could be the problem because:

In fact saving to a .png sequence solves the problem (in that I can use it in the VSE) rather than causing it. But I'd prefer to avoid that as it's time-consuming.

@cegaton Oh dear! I really wish I'd made no mention of PNG as it has been a distraction.

So, not using PNG images cannot be part of the solution because I wasn't using them in the compositor before I started trouble-shooting.

However, I think @cegaton is probably right in that the solution is in adjusting the Key node settings. I suspect what is actually happening is that the VSE is somehow disguising the problem with the keying.

I just wish I could find a way to replicate whatever the VSE is doing in the compositor!

Thanks to all for the contributions so far. Here is a screenshot of the original video. 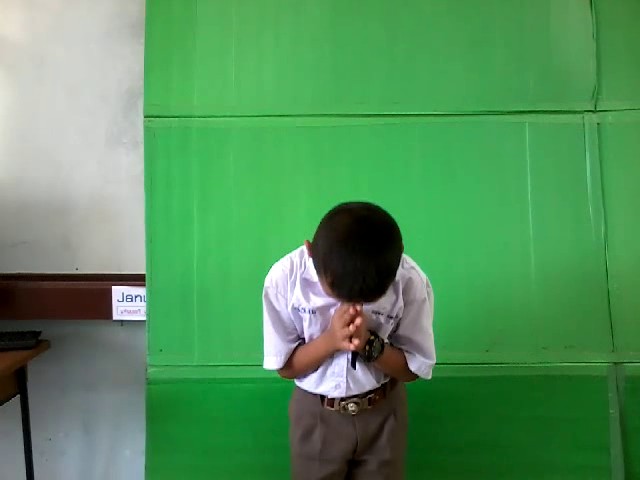 As you can see, the variation in green colour makes keying very difficult. I am used to chromakey where there is a setting called "tolerance" or something similar. I also vaguely remember stacking chromakeys in Kdenlive for severe cases such as this where the bottom panel is so much darker than the others.

The Key node in Blender is much better because it has "Despill" but I do miss the tolerance setting. Reading the Blender manual, I think I need to replace the single "Key Color" with a range, but I'm not sure how to do that.

As usual any advice would be most appreciated.

Below is the default settings for the keying node. 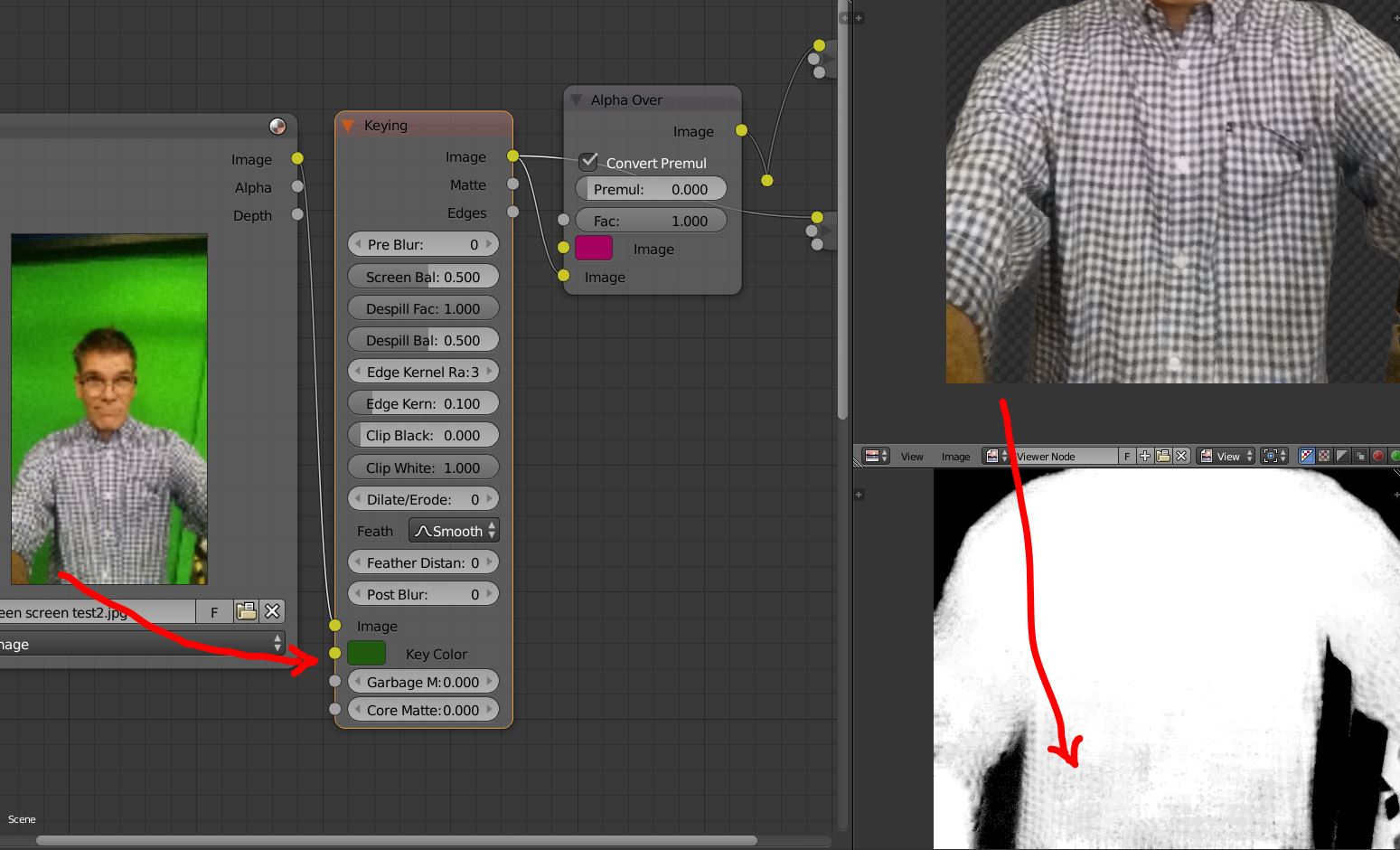 Change the Clip white and clip black to make the key more dense. 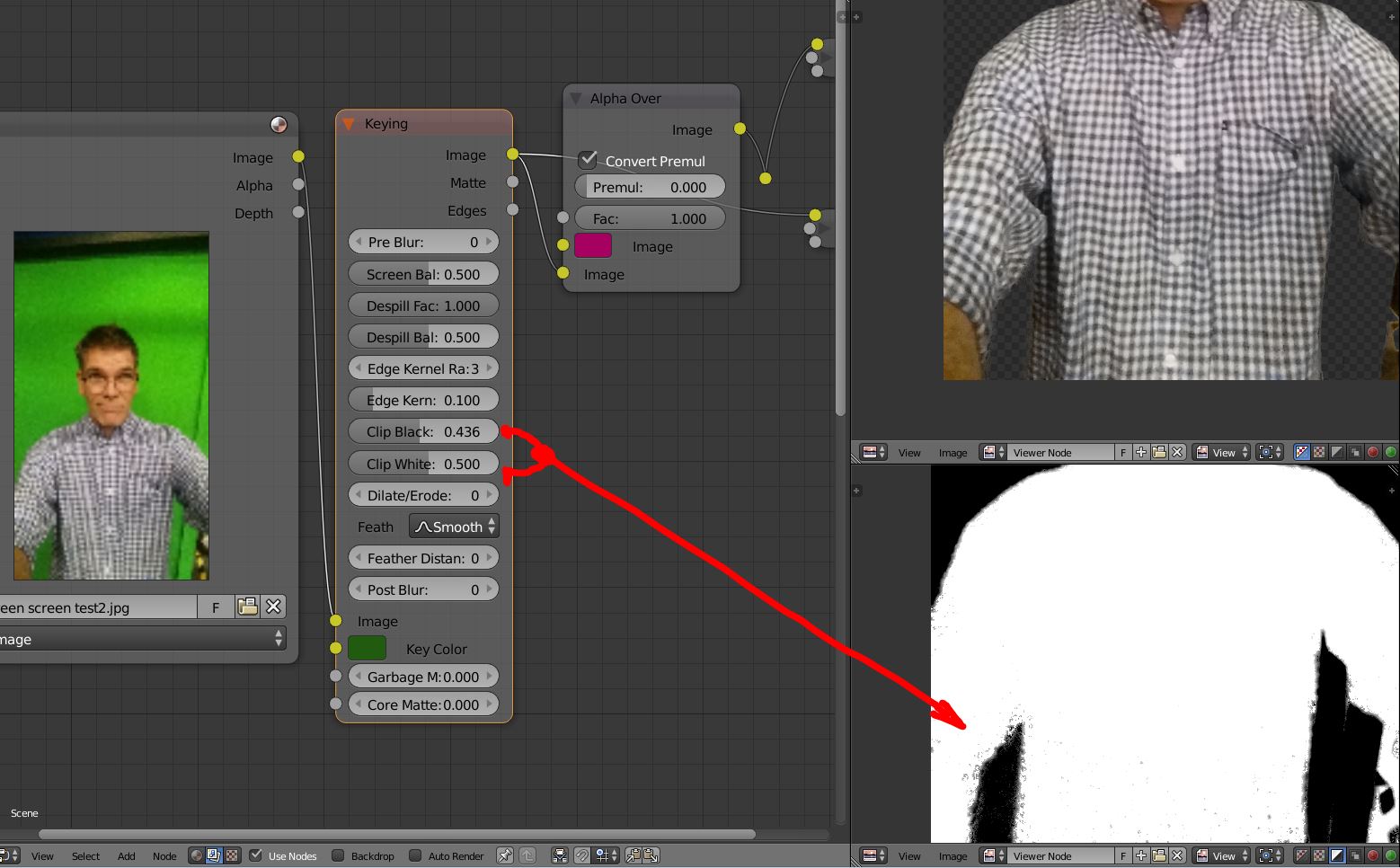 To test this, replace your background with a hot pink or yellow color image. This will make the partially transparent regions more obvious. 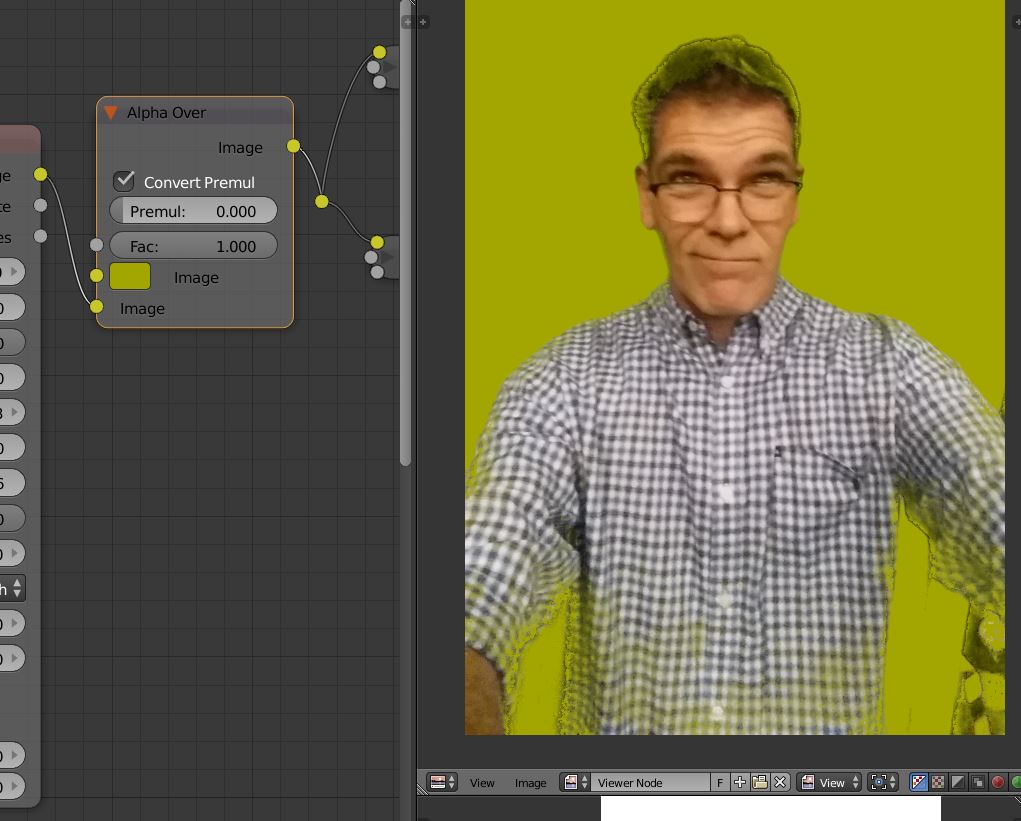 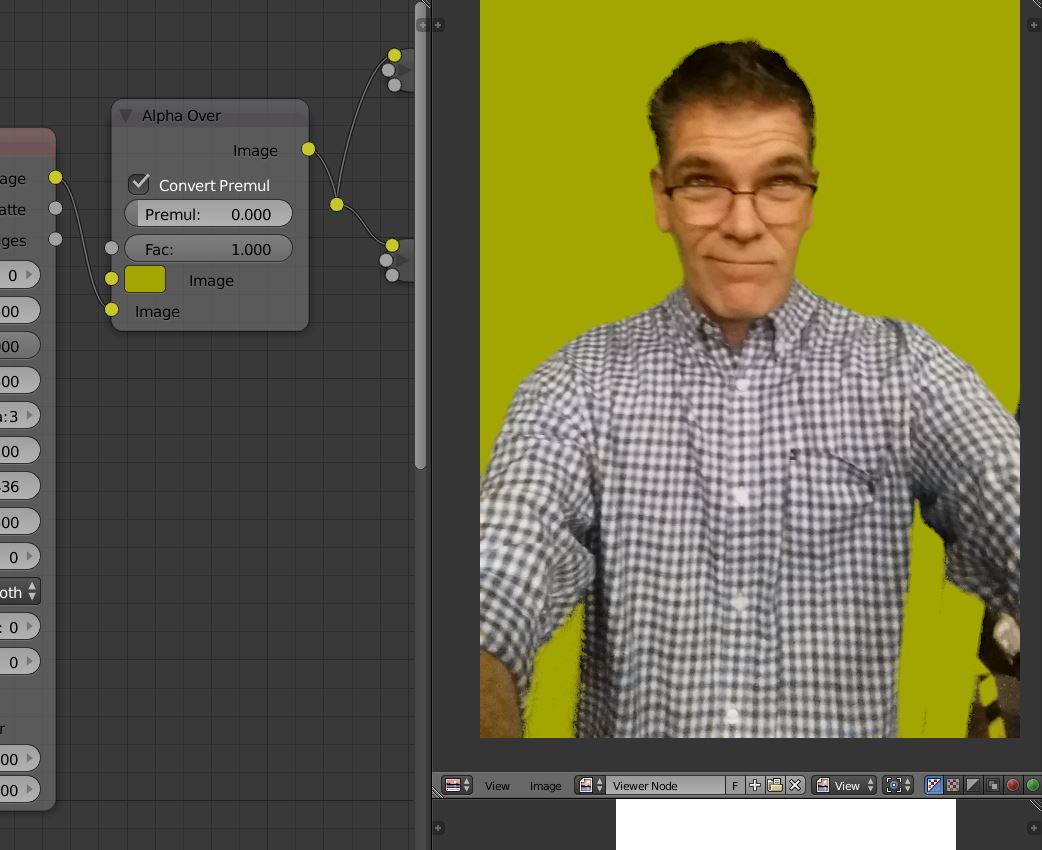 You can use a Chroma Key node to create the core matte. This does the heavy lifting of cutting out your main shape. Then you use the Keying node to soften the edges. I have introduced a mask to cut out the extra wall on the side. 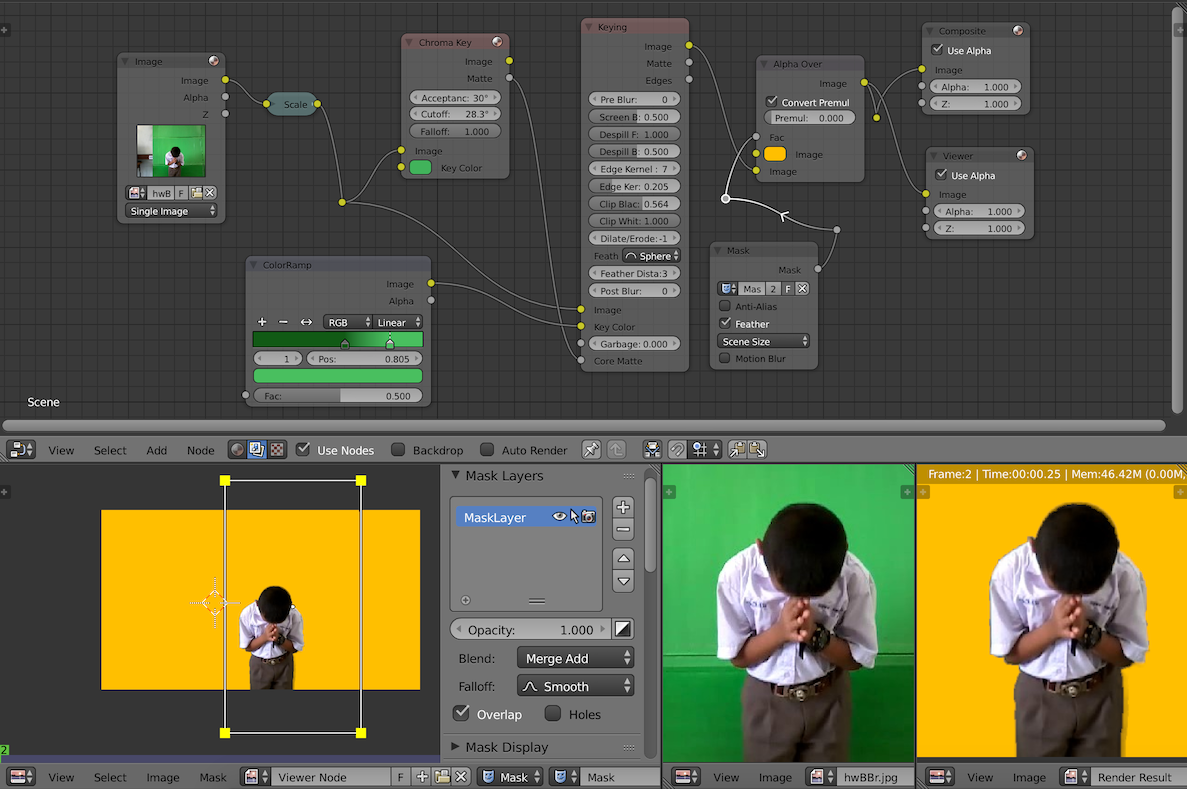 Now on to the issue at hand:

Open your image in the UV/Image editor and look at the RGB and Alpha information:

Your alpha channel is not as solid as you would nee it to be, all of those black and gray spots on the mask prevent the mask from being opaque... 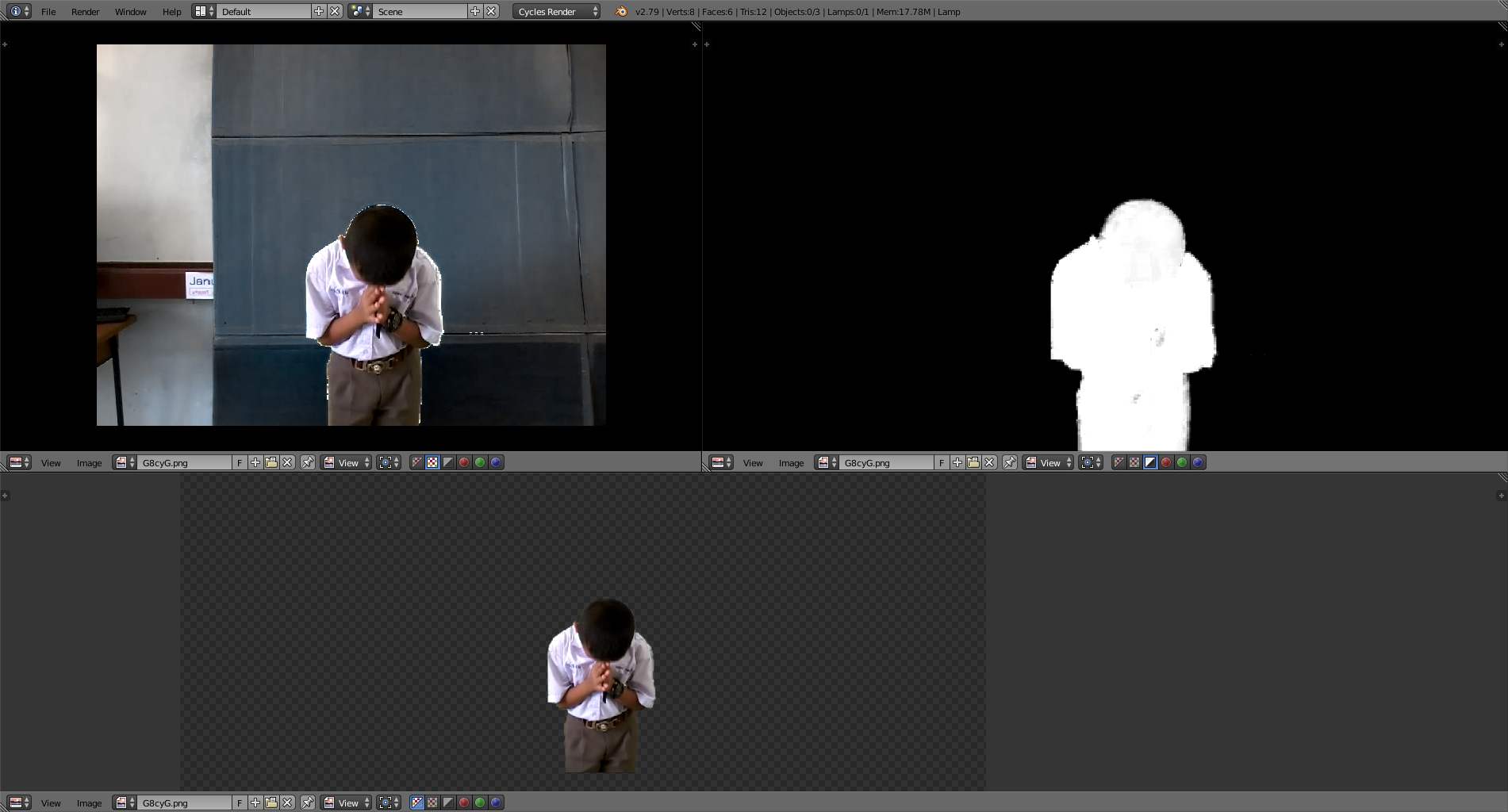 How to fix it:

For practical reasons, I'm going to have to leave this for the moment, but first, want to highlight this quote from @troy_s:

That is the most direct answer to my question: "Why is alpha-over node not as good as in the VSE?"

Everything else has been useful and interesting, but that is the answer I needed, so it would have been a shame if it went unnoticed.

11
How can I do color keying using the VSE?
4
Keying node in compositor. How can I associate the alpha channel so that it works with the Alpha Over Node?
2
Partly Ignored PNG Alpha?

11
What is the difference between a Viewer and a Compositor node?
2
How can I see a preview of the sequence of PNGs in the VSE?
5
VSE-Background image behind foreground video. Alpha over, alpha under don't work
1
Add Image to Blender's VSE fails to display alpha channel transparency
2
VSE render black as transparent
1
Can't view rendered Image Sequence over movie clip in compositor or VSE
1
Compositor - File Output - PNG compression ratio issue
1
Can you save an image sequence from blender's compositor without re-rendering the timeline?
1
Can I Denoise pre-rendered footage?