As part of a scene I have a white diffuse surface with some black icons on it. Right below it I have the same icons in white on a black surface.

I use the same texture for both surfaces, with a node set up like this:

As a minimal example I have a texture containing the letter A. I have it applied to two surfaces like this: 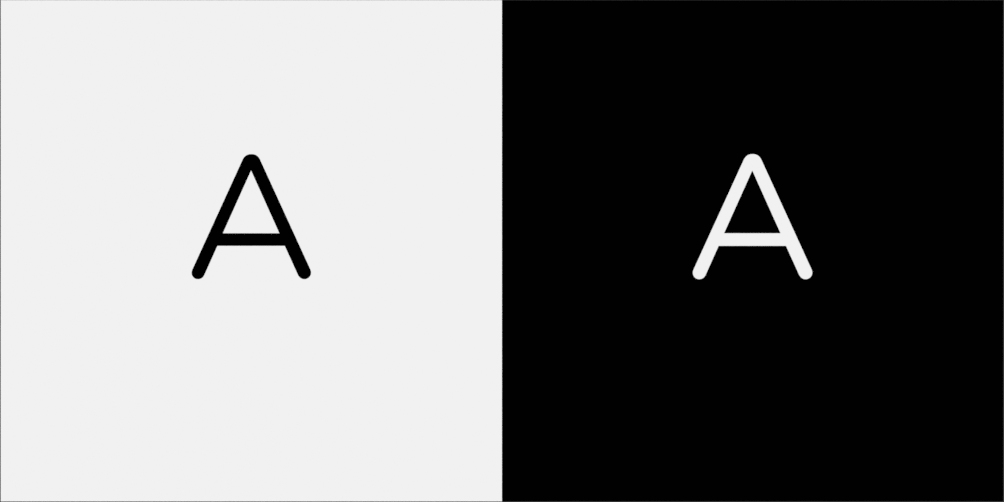 However, when the camera is further away (or it is rendered at a super low resolution) The white A looks significantly thicker than the black one:

When rendered at a higher resolution and scaled down the results are as expected:

The difference between the white and the black A's becomes even greater the smaller it is on the rendered image. Top is rensered at a higher resolution and scaled down, bottom is rendered at low resolution:

Currently the only way I can think of working around this issue is rendering at a higher resolution and scaling down the final image. This is fine for this example, but for the scene I'm working on render times are already high and I really don't want to increase the resolution.

Is there any way I can fix this and have both render at an equal thickness? Is it just a product of how the Cycles works? Is there a setting that can compensate for it? Or am I doing something completely wrong? The only possibly related question I found was this unanswered one here.

Here is the .blend file for this example:

I'm probably going to get laughed into next week for this one.......but I think it's an optical illusion. Not only that but I think it also has to do with 3d world as opposed to 2d screen. A white A on a black background is always going to look bigger than a black A on a white background. Take the Olympic rings for example ......there is an actual formula for how thick each ring should be so that they all look the same thickness. The greatest example of this that I have ever seen is as you look up towards the alter in St. Peter's in the Vatican where Bernini makes the letters at the top of the columns larger than the ones at the bottom of each pillar as you look up the nave so that they all look the same hight from ground level. Anyway put a cube or a plane in the scene and measure it.

Not the answer you're looking for? Browse other questions tagged cycles-render-engine rendering texturing or ask your own question.

2
Why does increasing resolution and then downsampling to desired size increase render quality?
1
Burned-out lines only in small resolution?

16
Liquid / glass interface IOR and normals in Cycles
3
How to stop ambient occlusion texture baking in cycles from only having black and white color output?
7
How can I preserve texture details when viewed from a distance?
3
Rendering detail on close-up views with lower resolution models?
1
Performance impact of turning up Max transparency bounces?
1
Relation between BI and Cycles lamp energy/emission values?
0
Cycles Render: Light reflections black in render
0
Why does render resolution affect output quality?
0
Cycles renders black areas in glossy concave mirror