I am creating a year-long time lapse, with one image taken at exactly the same time each day. However, due to changing memory cards changing the position of the camera by a small amount, many of the photos have a shift. I have tried carefully putting tracking markers and using 2D stabilization. However, the final rendered video still shows some jerky camera movements, as the distance between two consecutive frames is too large for the smoothing to take effect.

The frustrating thing is that in the "movie clip editor", some of the "Display" options allows for "Lock to Selection" and "Display Stabilization". When these options are ticked, the preview movie is beautifully centered and stable around one node in the center. However, there is no way to render this movie, as they are not part of the "2D Stabilization" node.

How can I render the movie with the camera locked to one of the nodes? The effect would be similar to a recent gif floating around the web of Emilia Clarke's stabilized eyebrows... Many thanks!

EDIT: @3pointedit: I am using 6 points. As I understand it, for my issue, it doesn't matter how many points I use, as the problem is that the image would be very stable for about ~10 frames (where the camera was still), then the next frame would be noticeable off (after I changed the card on the camera, but didn't set it back exactly in the same position). Hence, no matter how much the software wants to "stabilise" (interpolation or whatever), the 11th frame would noticeably jump. What I want is for every single frame to have the one designated marker in exactly the same position. Other markers can help in rotation stabilisation, etc. 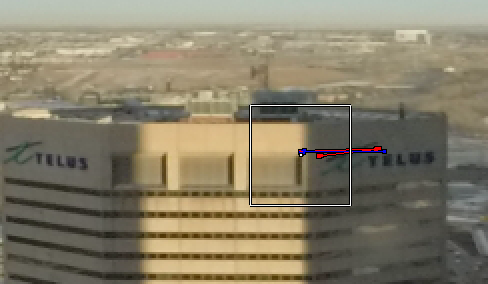 The white box is the designated marker that I want to stay on the one spot. As you can see, the track path will jump towards the right in the next frame (just above the "E" in TELUS). This tends to happen throughout the timelapse.

As you can see, I have "Lock to selection" ticked. This means that during the preview, the video behaves as I would like it to; the marker above stays on the same spot on the screen. However, during rendering, it does not.

I've tried futzing around with the various markers, autoscale on/off, etc, but to no avail.

Thanks very much for your time and wisdom; I appreciate it.

Trackers are uniquely associated to the tracked shot.

In order to stabilize you need to select the clip you are using as source.

8
Workaround to keyframe the world setting?
0
Unable to identify frame for cut in VSE - Bug?
2
When using spotlight as a projector, the projected image is consistently slightly offset in rendered image
2
Workflow for batch rendering in the same scene with different cameras
1
Blender renders always frame 1 on 2nd computer
1
Animation not rendering through to the last frame using Eevee
3
Movie clip is stabilized in preview, but not in render