Is there a way to avoid a Smooth modifier interfering with a bump-map?

I have a path that consists of a cube primitive, using four modifiers to get the effect I want (sort of): 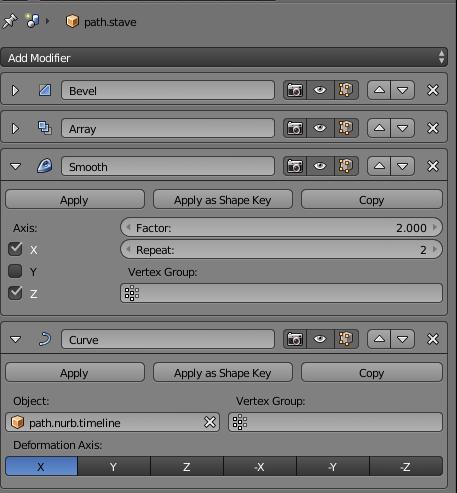 For the material, the most important part is a bump-map driven by a noise node.

In the image below, I have split the sample path into two sections: the first three slabs have smoothing turned on, and you can see that the path curves gracefully, but also notice the distortion of the material. In the last three slabs, the smoothing is turned off, the slabs are angular but the material is clear. 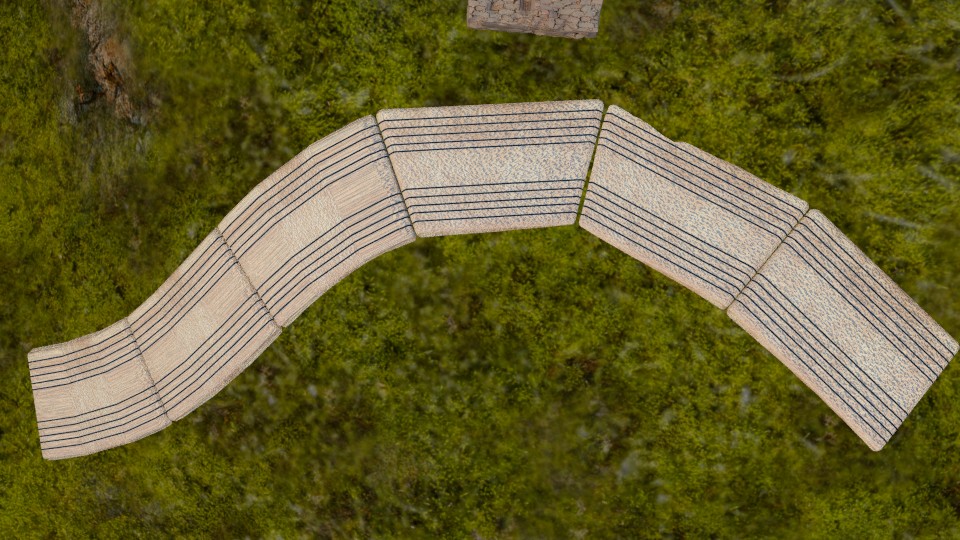 If you zoom into the image, the distortion on the first three slabs becomes more obvious.

Is there any way to either:

I would suggest a different method to get the same results. Here's what's happening with what you have right now:

The bevel modifier is adding a small bevel on each edge of the cube, which adds some extra vertices. The array modifier duplicates this object along a set axes, and then the smooth modifier smooths out all of the geometry.

The smooth modifier doesn't create any new geometry. Instead, the relatively high strength you are using is smoothing the object so much that the originally small bevels are now much larger. Essentially, the vertices created by the bevel modifier are getting pushed towards the center of the cube.

This is all fine, but you're noticing an issue that this method causes.

Instead, remove the bevel modifier and the smooth modifier, and use a subdivision surface modifier set to simple. This will add some extra vertices that will allow the curve to bend it smoothly.

Thanks to @Brenticus for the inspiration! I experimented a bit, and rather than using a Subdivision Surface modifier, I ended up actually subdividing the original cube.

I think this is more efficient, because I only needed to subdivide along the length of the slab, whereas with the Subdivision Surface modifier, you don't have that degree of control. Here is an image of the subdivided cube in edit mode. 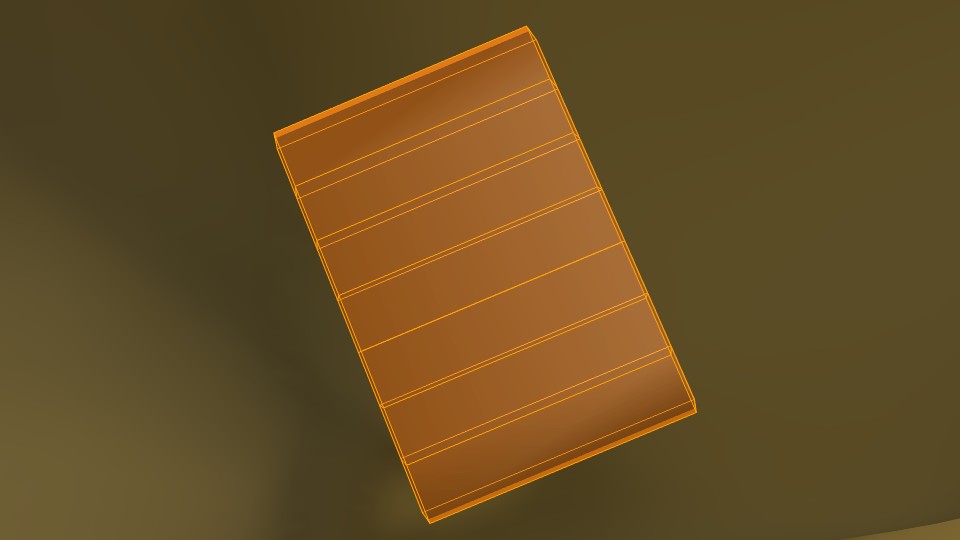 At first I tried 8 subdivisions, then 4, and finally settled on 6 as a compromise between quality and render time. In any case, the curvature of the path is much better than with the Smoothing modifier, the material is not distorted, and there is no appreciable effect on render time.

The image below shows the first three slabs with the Smoothing modifier, compared to the last three with a subdivided initial slab. 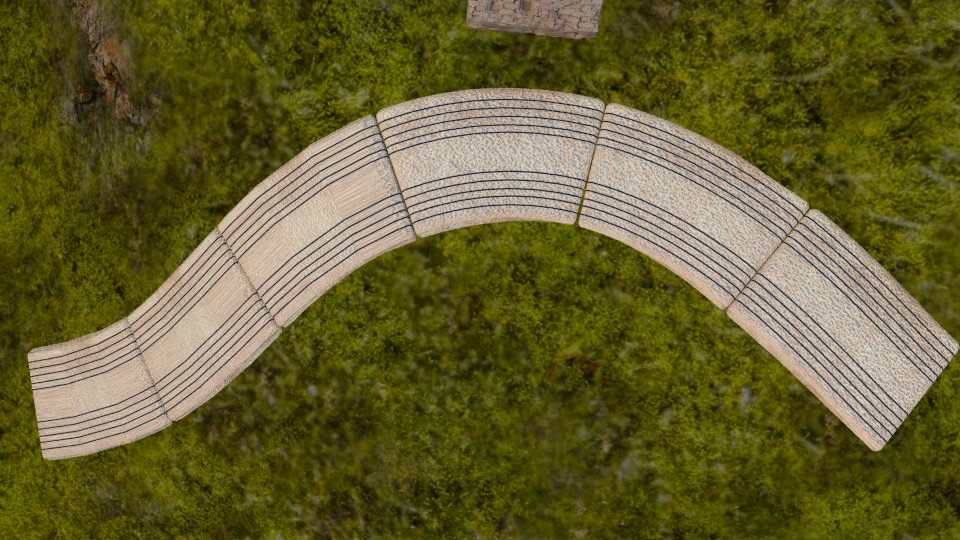 The next image shows a comparison between the Subdivision Surface modifier (first 3 slabs) and actually subdividing the cube (last 3 slabs). 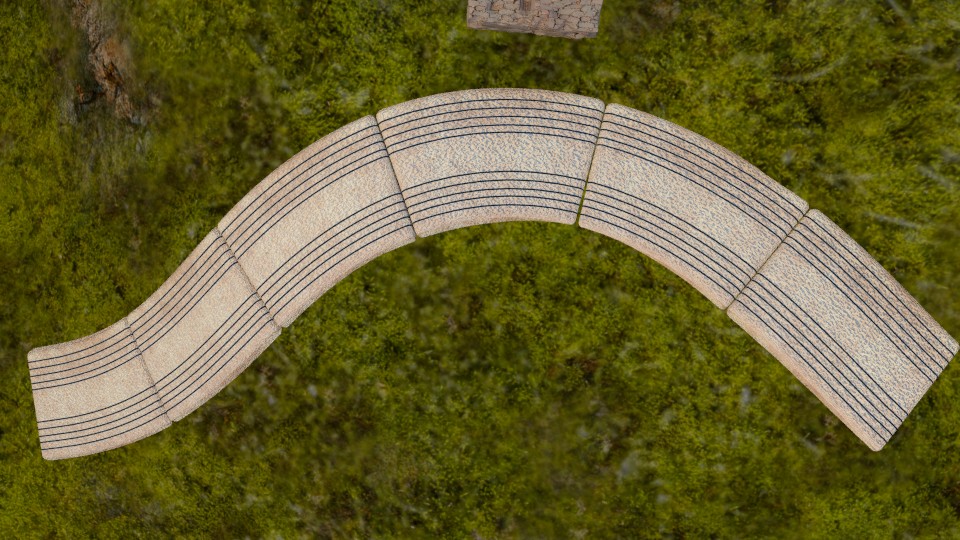 The quality looks about the same, but it did increase the render time by about 10%.

Once again, thanks to Brenticus for heading me in the right direction.

Not the answer you're looking for? Browse other questions tagged materials modifiers node-editor or ask your own question.

23
Using a Normal map together with a Bump map
0
Difficulty with multiple overlaying textures on one material
1
Is there a way to change the edge from 'Auto Smooth' mode to a complete curve?
3
Trying to model a pen and can't seem to be able to model the shape correctly
1
What height method should I use
6
How to make two points move along a path keeping a fixed (direct) distance all along?
0
Why can't I have both clean corners and a clean build for this curve animation?