Have progressed with my project and now have a group of independent items (quarter-coloured spheres) and now wish to have an animation that rotates spheres at random through one radian. 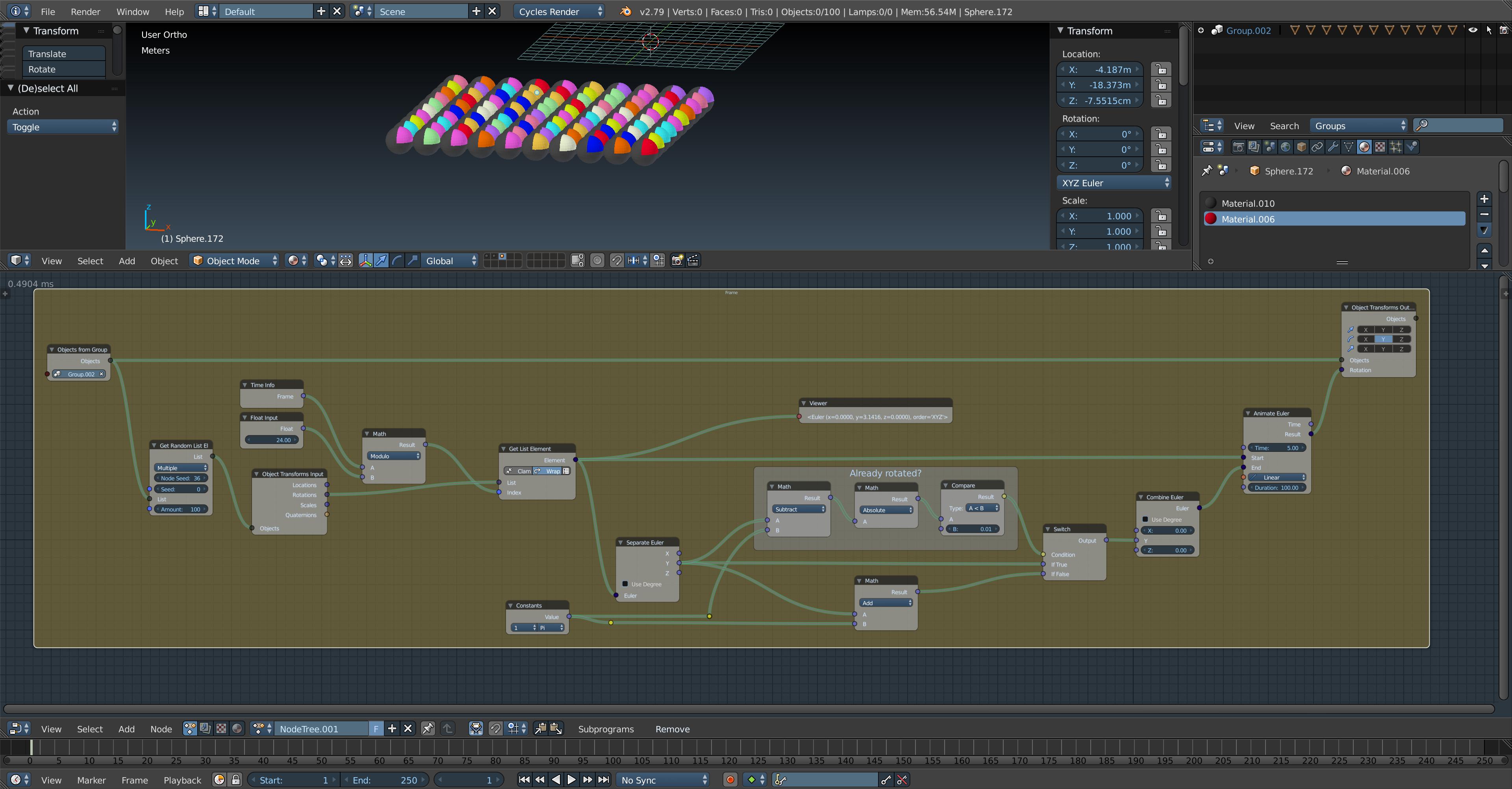 I've put together animation node trees (started with a loop subprogram before realising the error!) and now have one that responds to the frame position and should select from a random list of my group objects.

I have a node string that tests to see if a sphere has already been rotated (it should skip that object if it has) and still need to adjust frame data to get the frequency of selection/rotation correct.

However, the problem i have is that all spheres rotate in unison, there is no attempt to select them at random. I've tried everything but can't get it to behave - what's the obvious thing i'm missing?

Firstly, huge thanks to Bfoot and Omar for all the effort you've put into my education - just wish i'd been a more worthy student!! This stuff is a real challenge for me.

Attached is a screenshot of my latest node tree: 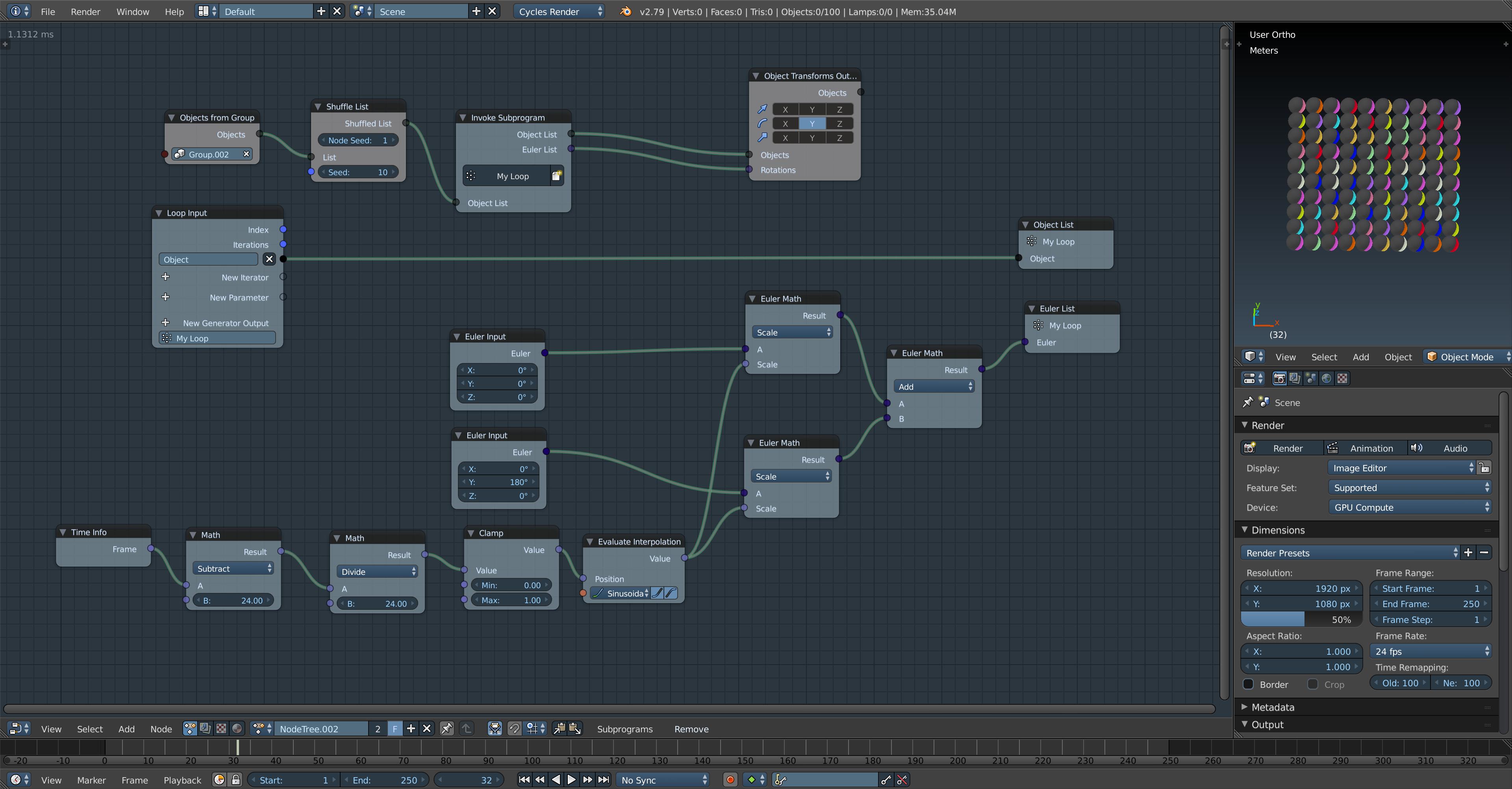 My inclination is to nest another subprogram with the first so that the first loop passes an object to the second loop for rotating, which then passes back the results to the first loop. The first loop then moves on to the next object and so on through the list. Does that make sense? I've tried all sorts of nesting structures but none of them work.

I know i'm leaning on you guys a lot but i'm almost there and just need the final key.

Thanks again, it's all a massive help.

First, I want to tell how to mix between two eulers (Animate one euler into the other). The mixing factor will range between zero and one where zero means the first euler and one means the second euler and any factor in between zero and one is a linear interpolation between the two. It is clear that the factor for our animation will be the time, but lets worry about that later. The equation for the mixing (linearly interpolate) between two eulers $e_1$ and $e_2$ using the factor $\alpha$ is:

Which is easily implemented in Animation Nodes as follows: 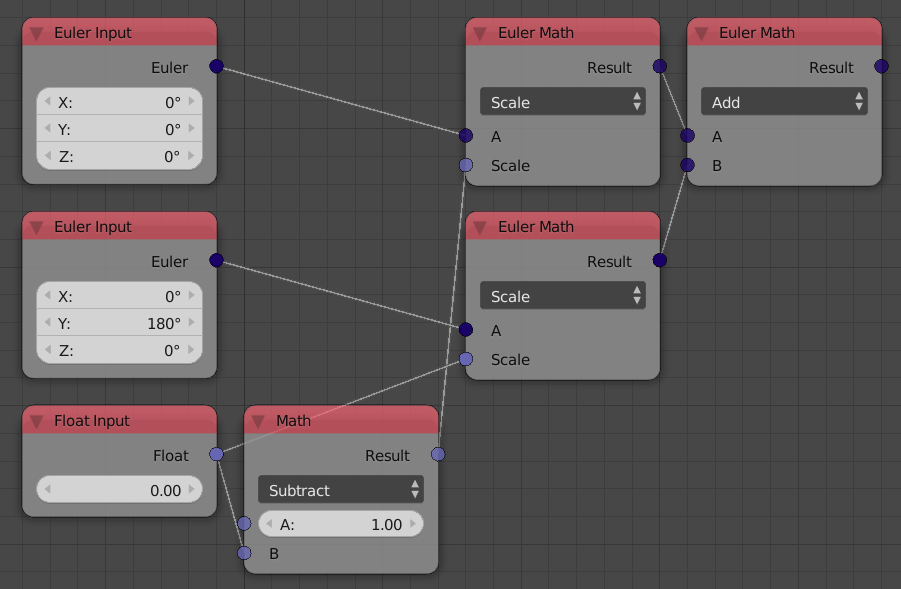 Now if I use the output as the rotation of an object and gradually increases the factor, I will get an animation like this where the $y$ value goes from zero to 180 gradually:

Now, if I want to utilize this to create an animation, I would use the current frame as the factor, but since the frame will change from zero to one in $\frac{1}{24}$ of the second, which is very fast. To slow it down, I will divide the the current frame by 24, that way, it will reach the maximum value (1) when the frame number becomes 24, because $\frac{24}{24} = 1$, so you see that the dominator of the division is actually the duration of the animation in frames. I will also add a minimum node to make sure the factor don't exceed one:

Now what if I want the animation to start at a certain frame? To achieve that, we have to make sure that the factor of mixing is zero for all the frames that preceeds the required start frame. To do that, we can subtract the start frame from the current time, making all the frames before it negative, if we then clamp the output to zero, all negative numbers will be zero and we would have achieved what we wanted, here is an example where we set the start frame to be 24:

We are now ready to animate the list of objects you have. Lets say we have this setup: 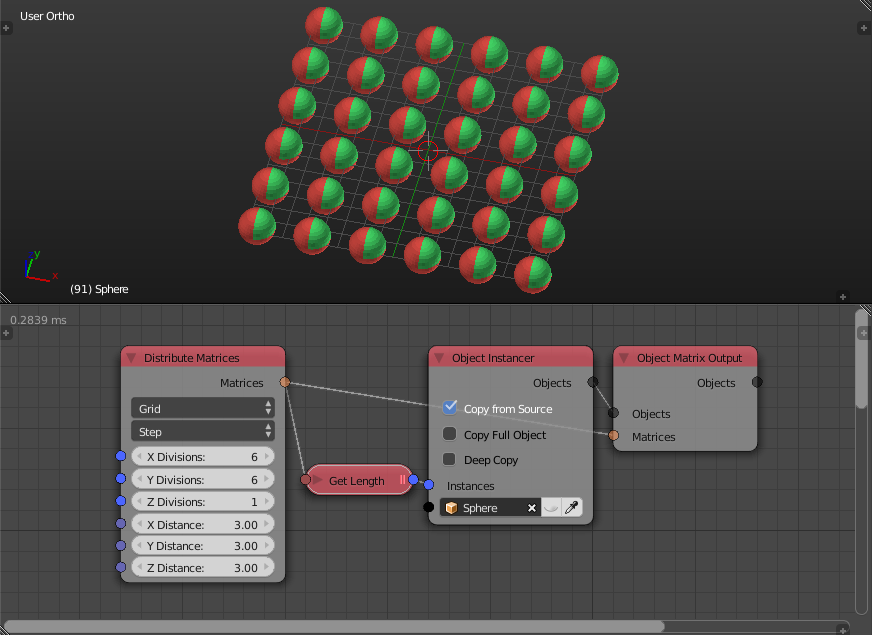 If we want to animate the objects, we will multiply their matrices by a rotation matrix with an animated euler (Euler we computed in the foregoing section), like this:

If we want the animations to start at different frames, all we have to do is subtract those frames just as we learned before:

Since we clamped the factor, the objects will stay at their final orientation after the duration of the animation is finished.

You DO need a loop in there somewhere if you are going to rotate the spheres individually and not all at once. One problem you had is you put your output for the rotations from the objects before they were randomly selected.

When I tried the above it seemed to work for me (if that's what you're looking for). To reverse the rotations and start again, just change the Math function under the Already Rotated frame from Add to Subtract.

[EDIT] So without knowing geometry very well I looked at the looping and made a couple of changes (image below).

The animate euler node had an unused slot for time. This was needed in order to figure out how to interpolate the rotation. You had no input so I created a parameter in the loop to pass the frame values. Now when you play the timeline the spheres will rotate 180.

There is still the problem of being jerky. The smooth in/out is being applied to the animation overall the 100 frames. So the first few movements and last few are smooth. But the middle is linear and jerky. I'll look into this. 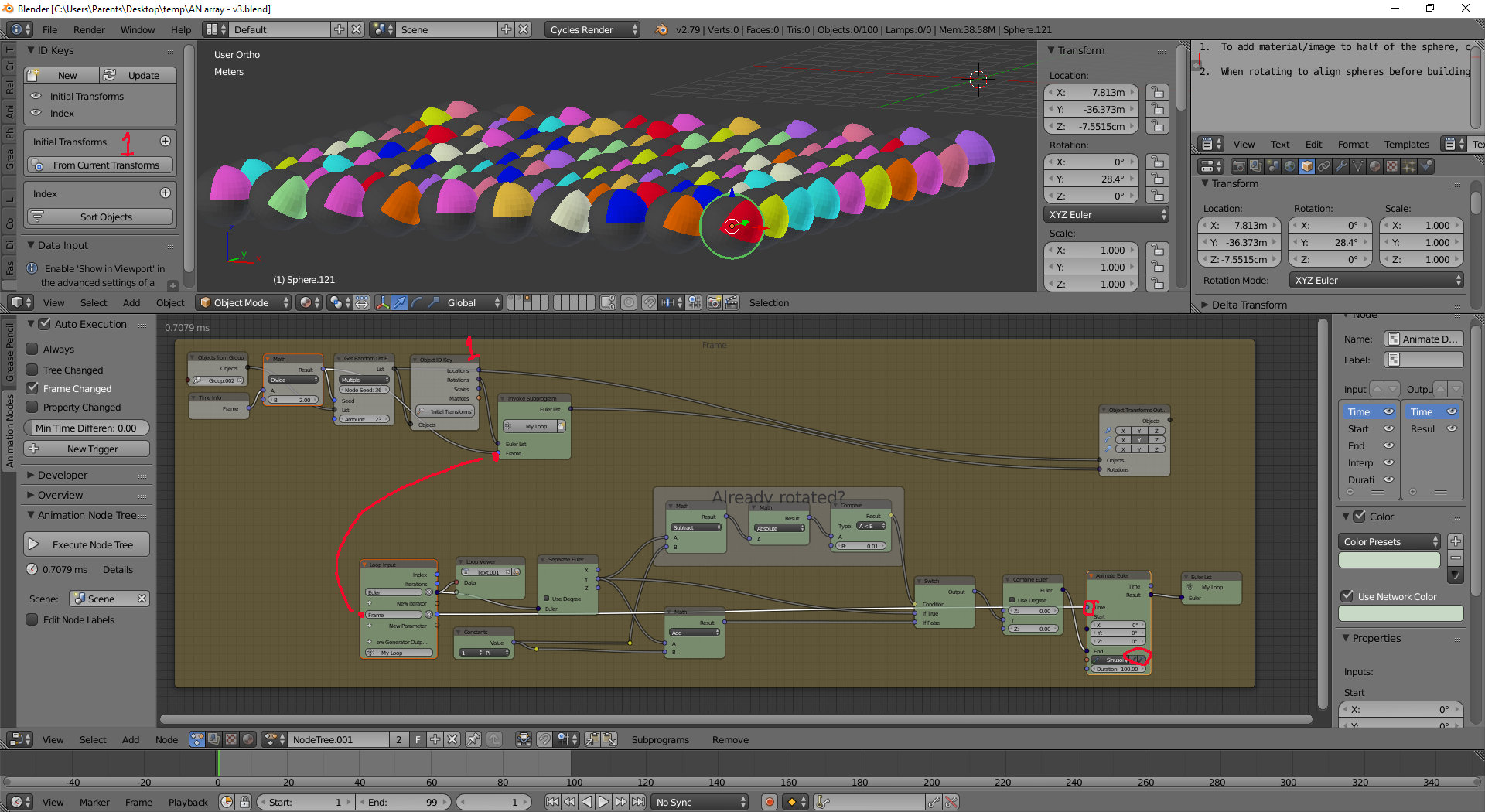 Well after a bunch more internet searching and head scratching, i've finally got the answer! And it's very simple - just proves there's beauty in economy when it comes to animation nodes, use as few as you can.

Thanks immensely for all the help and support received, it's added greatly to my knowledge even if we didn't get to the right answer. 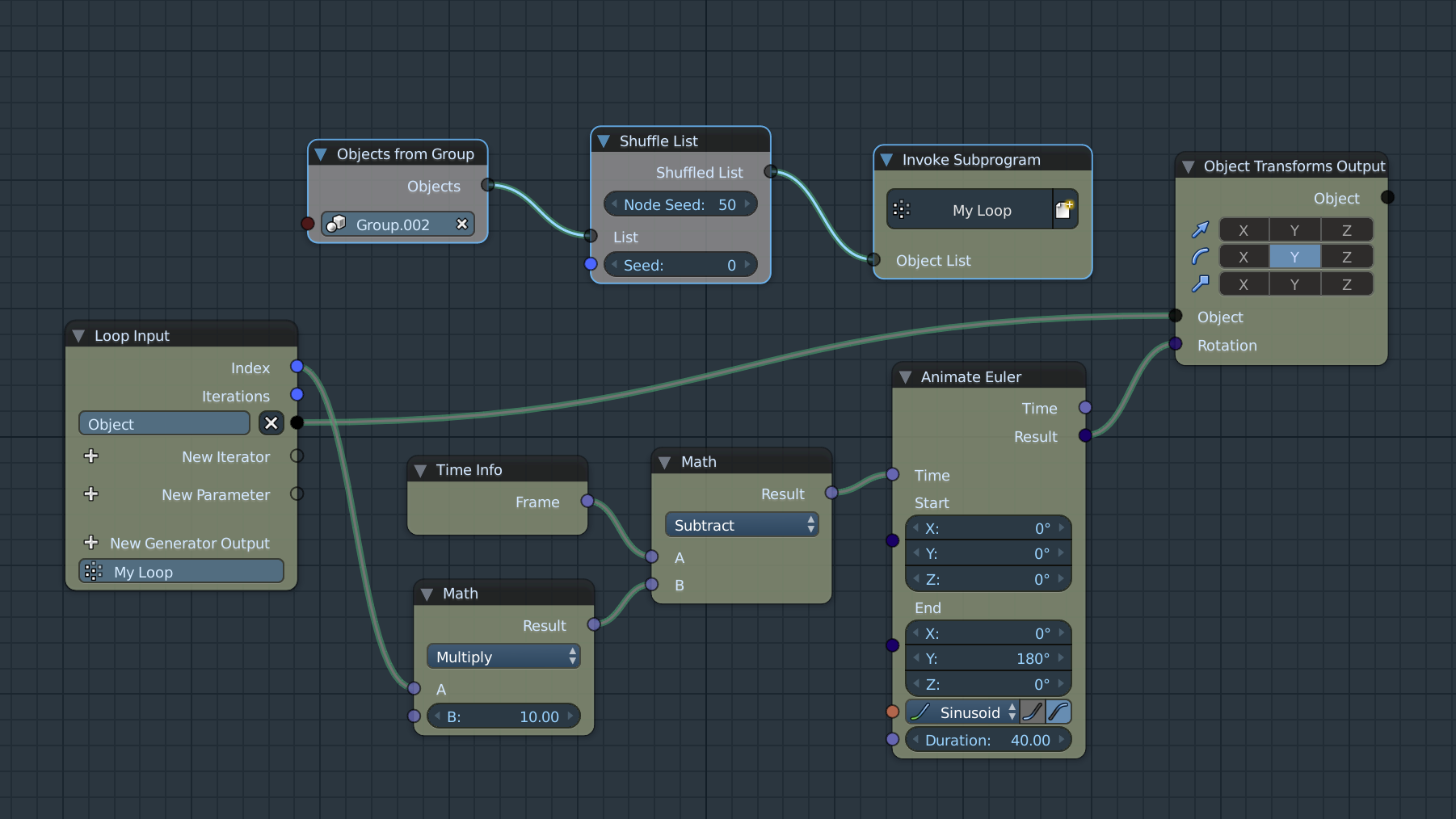