How to shoot a character from one platform to another. (BGE)

So my character (character physics) will be traveling through the level and I want him to be able to jump into a cannon of sorts, and when a button is pushed, he gets fired upwards along a parabolic path to another platform to make the level more interesting. I've tried making an invisible platform that carries him quickly, but it doesn't work and is really hard to make anyway. I am obviously new to blender, so it feels like there is a very simple solution that I'm just not finding.... Thanks!

So I have a player, a floor for the player to walk on, a wall to jump over, and a cannon to launch him.

The player has a basic setup:

W to move forward, A to turn left, S to move backward, and so on. The motion of the Dynamic player is simply the Location of the Motion Actuator. (You probably have a different setup)

Now, inside the cannon, I added a child cube, that I'm calling inside. It's static and has the cannon as a parent. It's also Invisible and has the Ghost property applied. 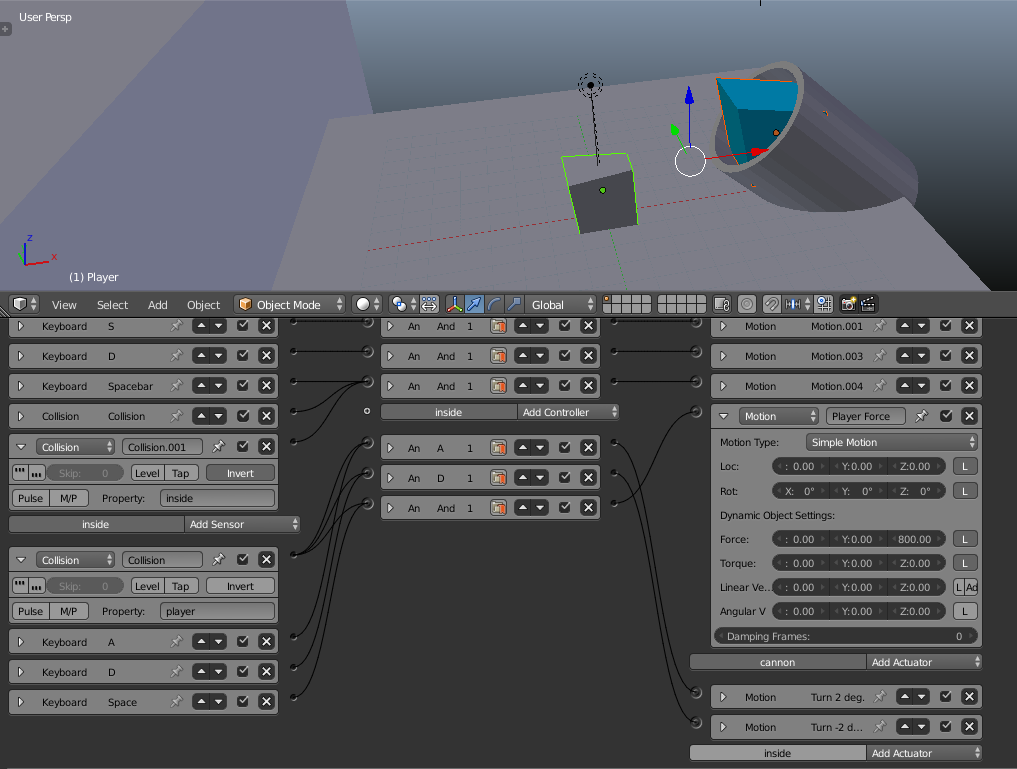 Referencing the above image, when the player comes into contact with the inside cube, the keyboard sensors will activate. When A is pressed, they will activate the cannon's Motion Actuator, that will turn the cannon 2 degrees along the Global Z axis. Likewise, when D is pressed, it will move -2 degrees.

Last of all, when the Spacebar is pressed while in contact with the inside cube, the Player's Motion Actuator is triggered with a force of 800 along the Z axis. Because the cannon is slanted, the player will hit the top of the cannon and will be forced out of the cannon at the same angle. This will not work if your cannon is vertical.

2
How to copy BGE logic from one object to another using script?
0
BGE Character dynamic
1
BGE Consistent character speed
0
Stopping a character fall in Blender Game Engine
1
Is it possible to transition from one material to another in bge?
3
Using Character Controls For BGE
1
How could I import a game character from another .blend file in the bge during runtime?
0
Character stick to bottom of ground static objects. How do I fix this?
0
Character physics "jump limit" in bge....!