How does fac differ with manual control versus node control?

If I mix two shaders together, like the diffuse and glossy shaders, I understand that I can change the factor slider between 0 - 1.

and that having 0.5 factor will show a 50% mix of blue diffuse and green glossy.

What isn't clear to me is what is going on when something else is plugged into the fac input, if I plug in a checker texture for example, with white and black as its two color values.

This now clearly seperates the two shaders based on the checker texture, I understand its doing that but how does it get away with not just supplying 0 - 1?

If I am only allowed to supply 0 - 1 using the slider, what is the checker doing to the factor that I can't do with my slider? Can you explain what can be plugged in to the fac input and how it differs from the user control slider.

Using the slider will just give one value for the entire surface (or volume, now that we have volume rendering :)

Using a texture will give multiple values mapped to different locations (the depends on the texture mapping of course): 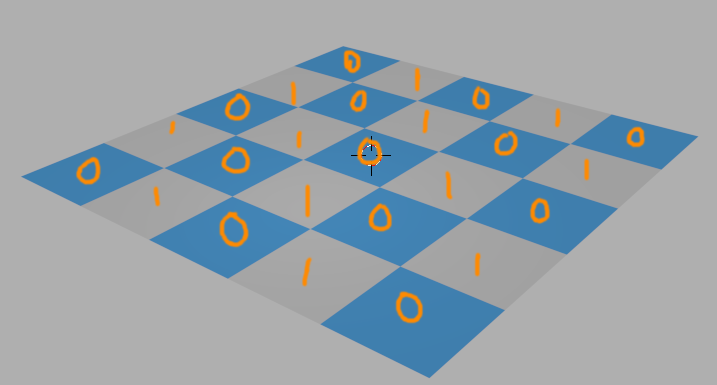 Basically the texture is supplying a value between 0-1 per ray.

So, you can use anything which results in a value (which is pretty much anything). However that's not to say that everything will give a meaningful or useful result.

Note that even if the factor is somewhere between 0-1, the ray will only sample one shader at a time (if you are using the progressive integrator), but with many rays sampling the same point it will converge to a pixel which is a mix between the two shaders.

9
How to add a specularity map in cycles?
7
How does the mix shader work when using a Fresnel node as a factor?
5
How are color images used as input values in nodes?
5
Take white background out of image with cycles?
4
Viewing background through alpha channel of foreground object
3
Difference between a fac output and a Color output
2
Why does my model become partially transparent when using the alpha channel to control transparency?
1
How do I subtract an image from specularity of a material in blender?

4
Editing group node sockets, with no external input?
0
One node group input override another
1
Normalize mix shader fac to .75 as midpoint instead of .5
4
Confusing problem when I'm trying to mix Diffuse with Glossy shader
5
Is there a node in Lux with a similar function as Cycles' Fresnel and Layerweight nodes?
1
How to attach a Bump Node to a Node setup containing many shaders in Cycles?
1
Blending Displacement Textures with Geometry Node - why doesnt it work?
1
Dissolving textures to animate blink - What am I doing wrong? (Face animation with shaders)