besides right now I'm trying to put some retention walls in a terrain in a way like this: 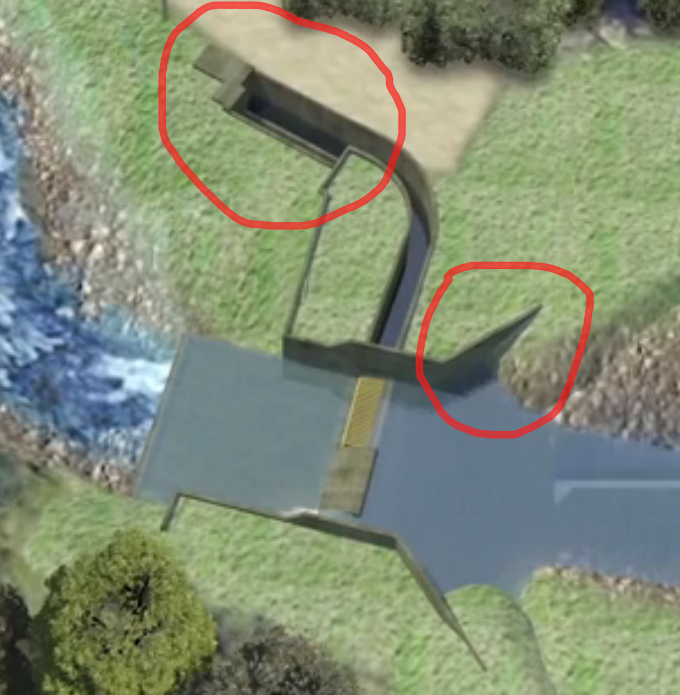 So, at one side of the wall the terrain has some altitude, and in the other side, a different one

This has come to be a little troublesome because I think using boolean modifiers (to produce the intersections) is a little messy and tricky in Blender, and I don't need a watertight or non-manifold model (I'm not running any simulations over it) I just want it to look right.

I was thinking, that if I think of the terrain as a sheet of paper, I would make cuts and displace up and down one part of the paper, and place a "wall" in between the cuts...

What would be a clean equivalent to this in Blender?

Like many (most?) things in Blender there are multiple solutions to any problem, and this challenge is no different. The decision on which method to use will largely depend upon underlying geometry, you need, what you plan to use the project for, what future use you might want to make of the geometry later, and at what stage you are at in the development of the project.

I've actually modeled bits of terrain where I was modeling actual parts of the US. The technique I like best so far is to start with a "circle" with four vertices, subdivide the edges, so that there is one vertex at each point where a contour line crosses the edge. I then extrude from vertices (or sometimes pairs of vertices, looking elevation to the vertices on the opposite edge. Then I fill the faces. In this method, the retaining wall poses no particular issue; the land above is at one elevation, the land below is at another. Depending upon the nature and construction of the retaining wall, I would either construct it as part of the terrain, or model it later with another object. Whether or not I would merge the retaining wall with the terrain would depend upon a number of factors. I can easily imagine instances where I might combine the retaining wall into the same object as the terrain, but generally would keep it separate.

Ive uploaded a simplified explanation of my general workflow here, along with a ~.blend file that illustrates the various steps. The first step is illustrated in layer 2, the second in layer 3, &c.

7
How do I create slices of a topographical mesh?

1
Interpolate mesh surface between curves
1
Insetting a non-closed mesh into a solid object
0
Terrain Modelling
0
Extruding 3 circles from a uv sphere, general modeling advice
0
Avoid self penetration/intersection of parts of a plant during manipulation