Can I map a vector image on a mesh?

I often run into a situation where I create Image Maps in Illustrator, export them as PNG, and when I apply them into my mesh and zoom in, pixelation from the PNG appears. This annoys me a lot in 3D and games (see this model imported from a Wii U game, which gets pixelated as soon as you zoom in)

Wouldn't it make more sense to be able to import an image map as a vector format, since Blender accepts (in some instances) SVG files?

EDIT: There are a lot of great answers which are also very tedious and can't really be incorporated in a regular workflow. The question was more about mapping SVG like this one on a cup object like this one to show a client an idea quickly, etc.

If a shape can be recreated with mathematical functions (plotted shapes) it can be created with cycles math nodes.

Let's create a procedural rounded rectangle group. (If you know Blender and math, skip to step 3.)

Go wild, this is rather slow. 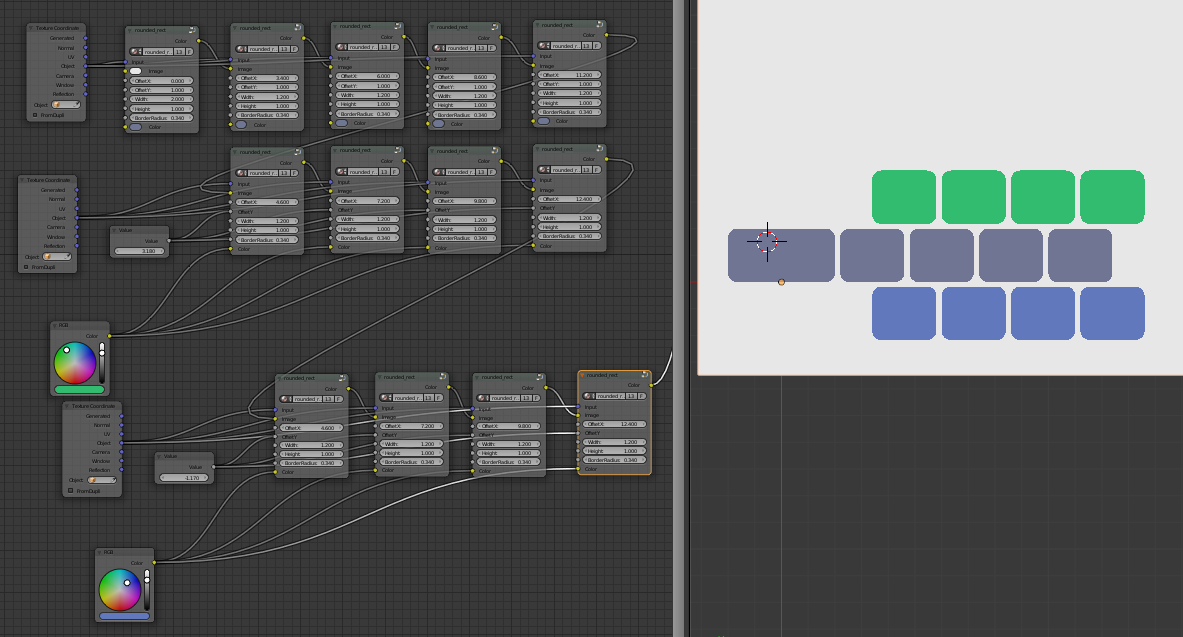 Creating shapes based on functions with nodes

Creating a shape with OSL

The open shading language enable us to use a custom script node. Knowlegde of C and Python is required for the following part. (Since I don't really know any C or Python, the code samples are messy.)

You might want to head to BlenderSushi and complete their OSL series.

This generates the following output.

With these tools you are equipped to start writing your svg plugin. The hit function has to be implemented for curveto, smooth curveto, quadratic Bézier curve, smooth quadratic Bézier curveto and elliptical Arc and the python script has to convert all types of the svg path. It's actually not that hard to compute further intersections, but parsing the svg is going to be a lot of work.

The final goal is to write a python script, which parses an svg (with python's xml parser) and converts is to a osl shader script. The points and curves would be hardcoded in the shader.
Unfortunately, we have to first implement the most basic collision detection for beziers (see the previous link), because most svgs will use them, and possibly for all other svg elements (see the previous2 link).

One option is to import your SVG using the SVG import addon. 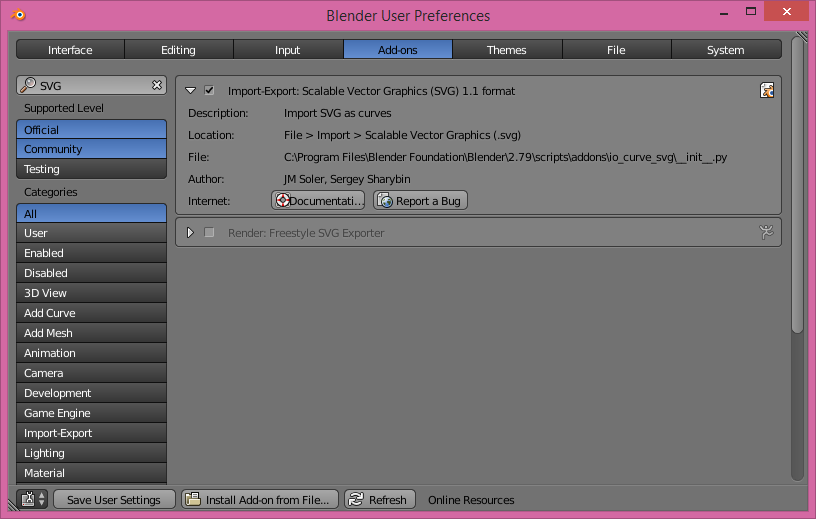 We'll use this test image. 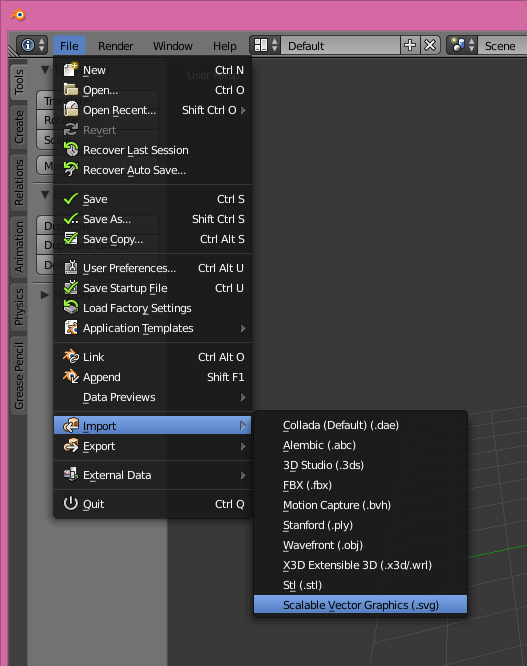 In my case, not a lot appears to have changed, but I have some curves now in the outliner. 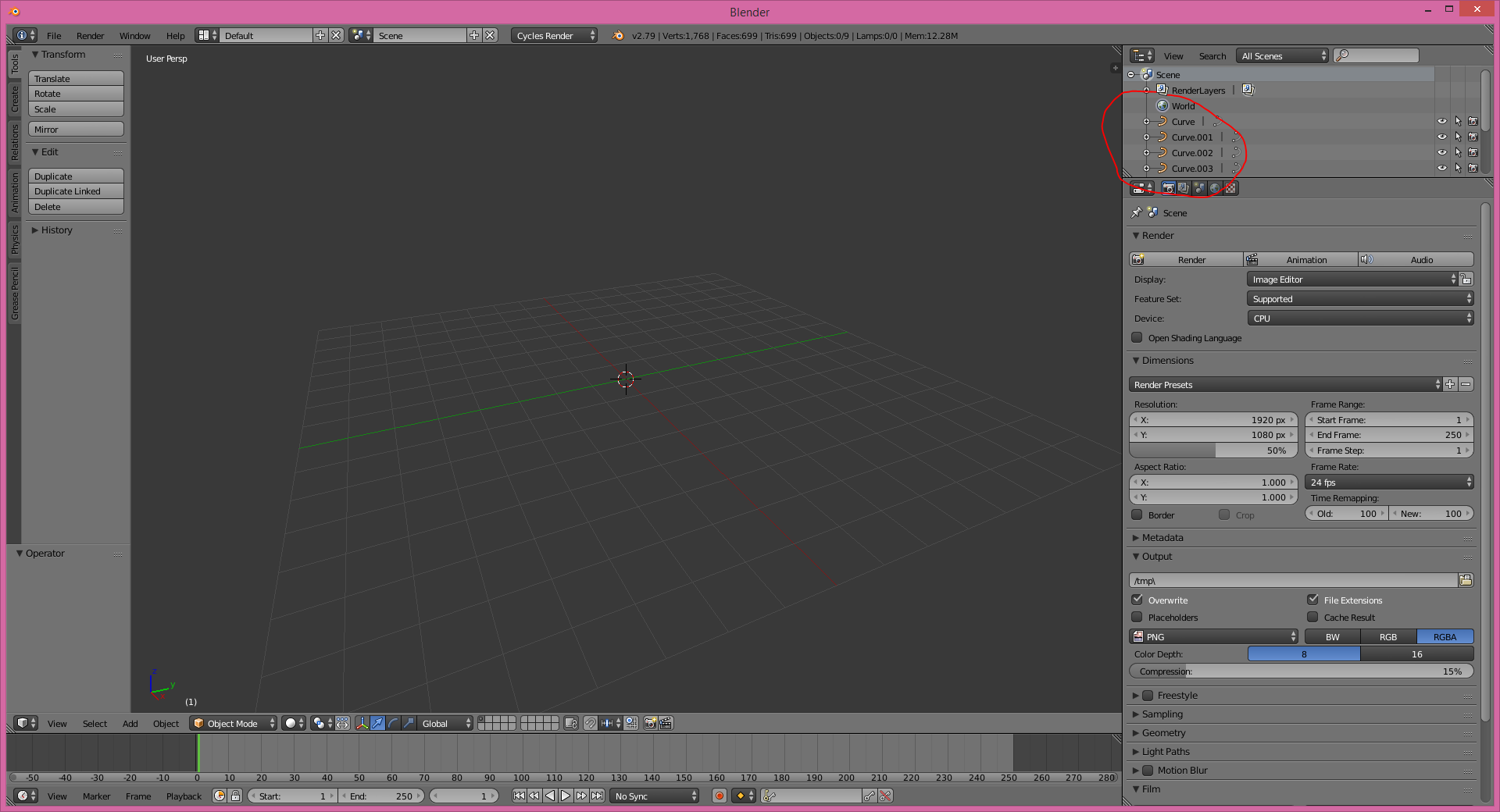 If I zoom in, I can see the image I imported, but there are some problems. Note that blender has automatically created a set of basic diffuse materials (called "SVGMat.001...") for each color in the image. Editing these can be used to change the look of the final result. 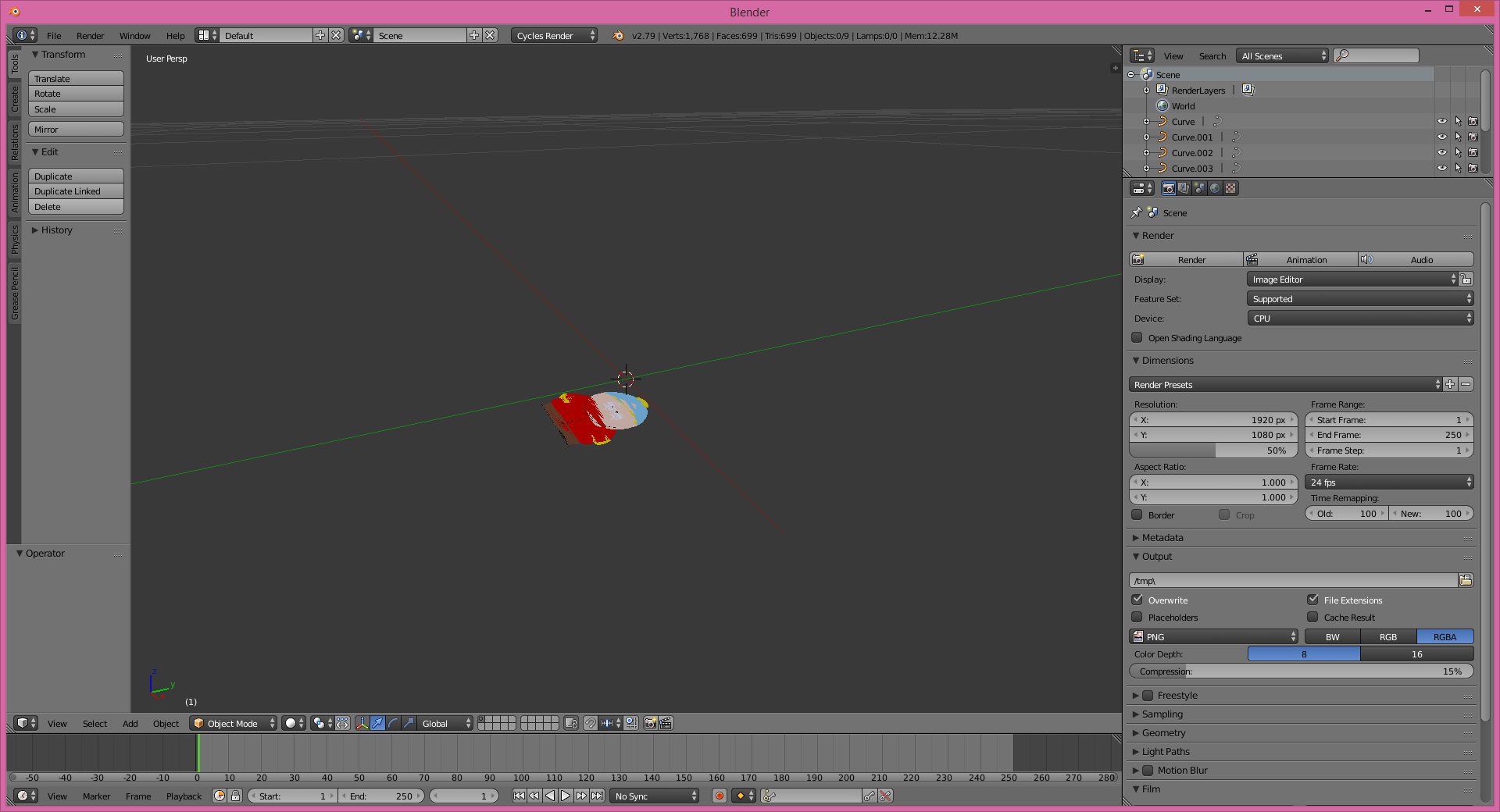 I'll start by increasing the scale of all of the curves by 100, then applying that scale with ctrl + a. 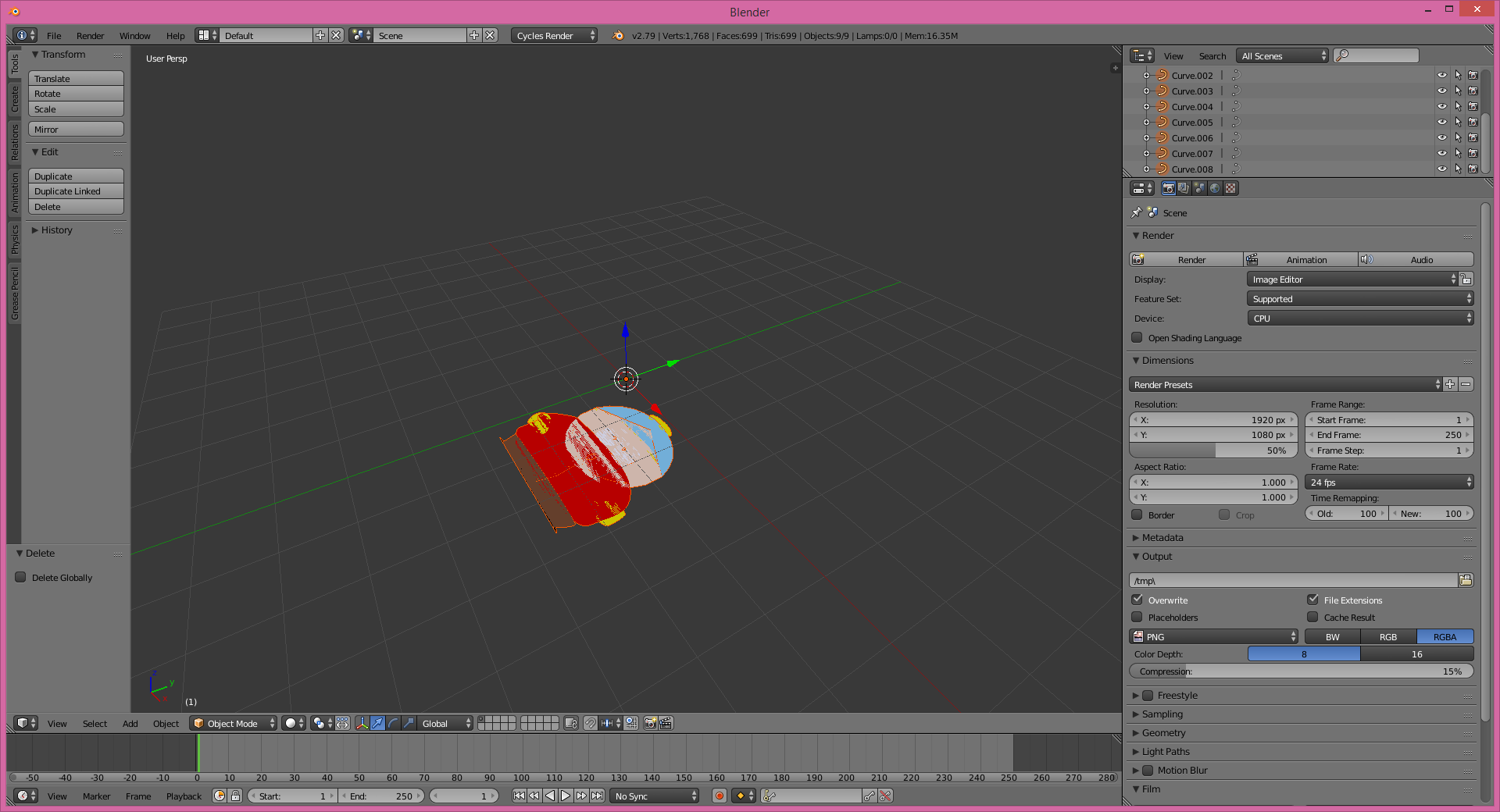 Right now all of the curves are intersecting with each other, because they all have the same Z position. I'll go through each curve, and move it up or down by 0.001 or so, to keep them from clipping. In my case, all the layers were imported in order, so it was pretty easy to tell which should be on top, because it showed up last in the outliner. 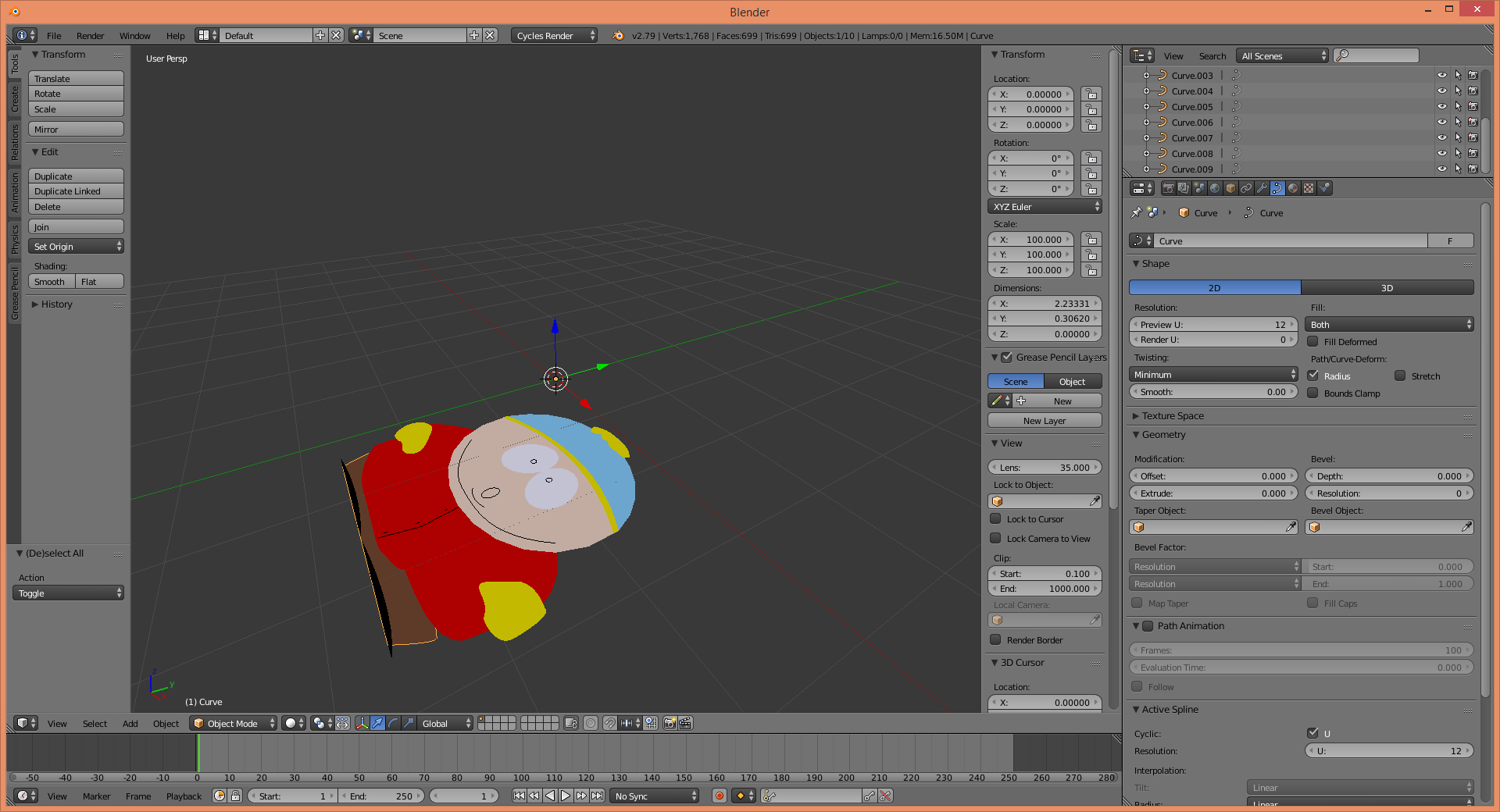 To keep all of these curves together, first I'm going to add an empty, then parent all the curves to that empty. 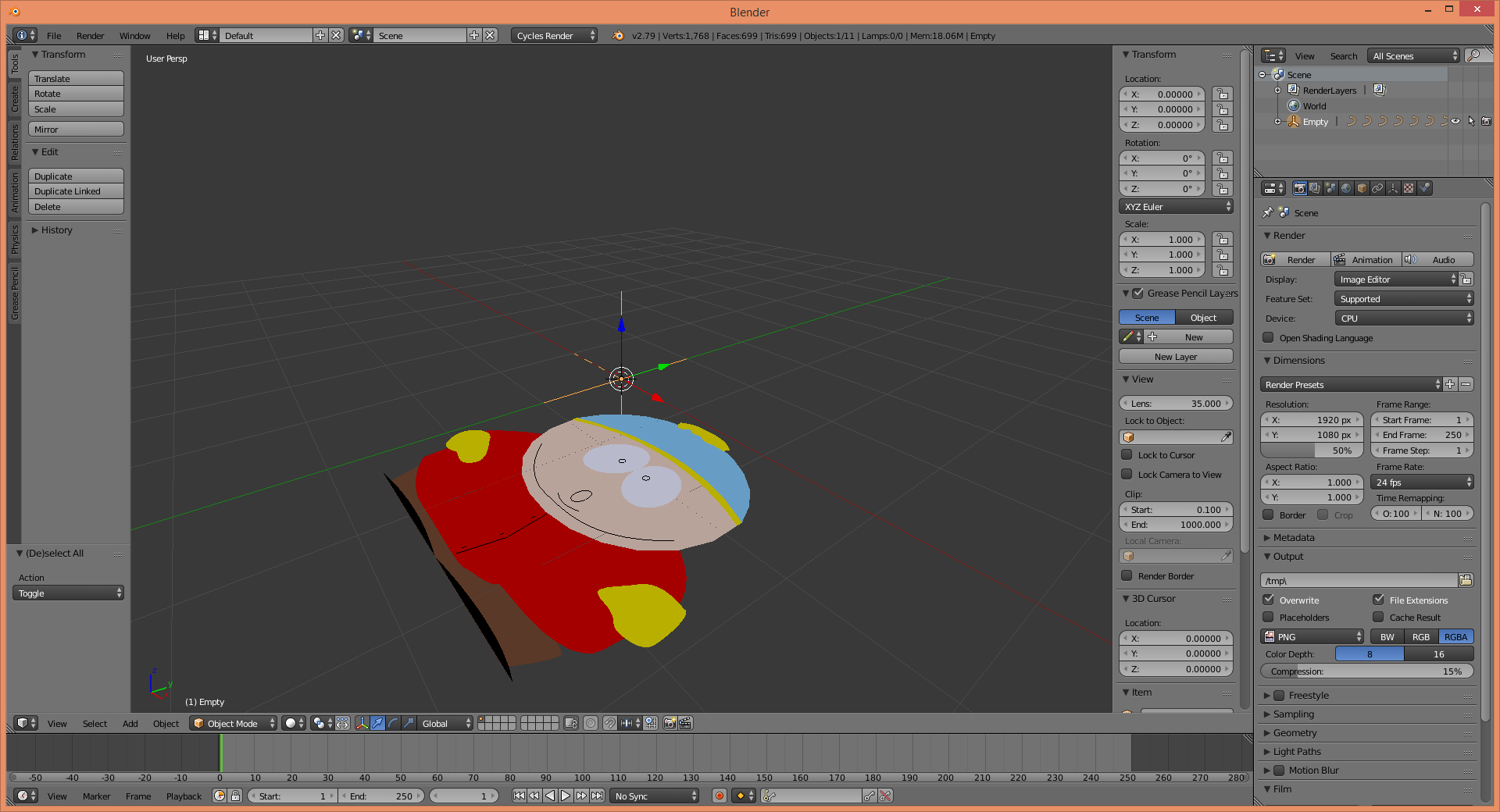 There's still one more major problem that needs to be fixed: Cartman's eyes and mouth are not filled in. This is because Blender automatically filled in his feet, but not the other shapes on the same layer. We can fix this by entering edit mode and adding polyfaces for each shape that isn't filled. press tab to enter edit mode with the eyes/mouth/feet layer selected. 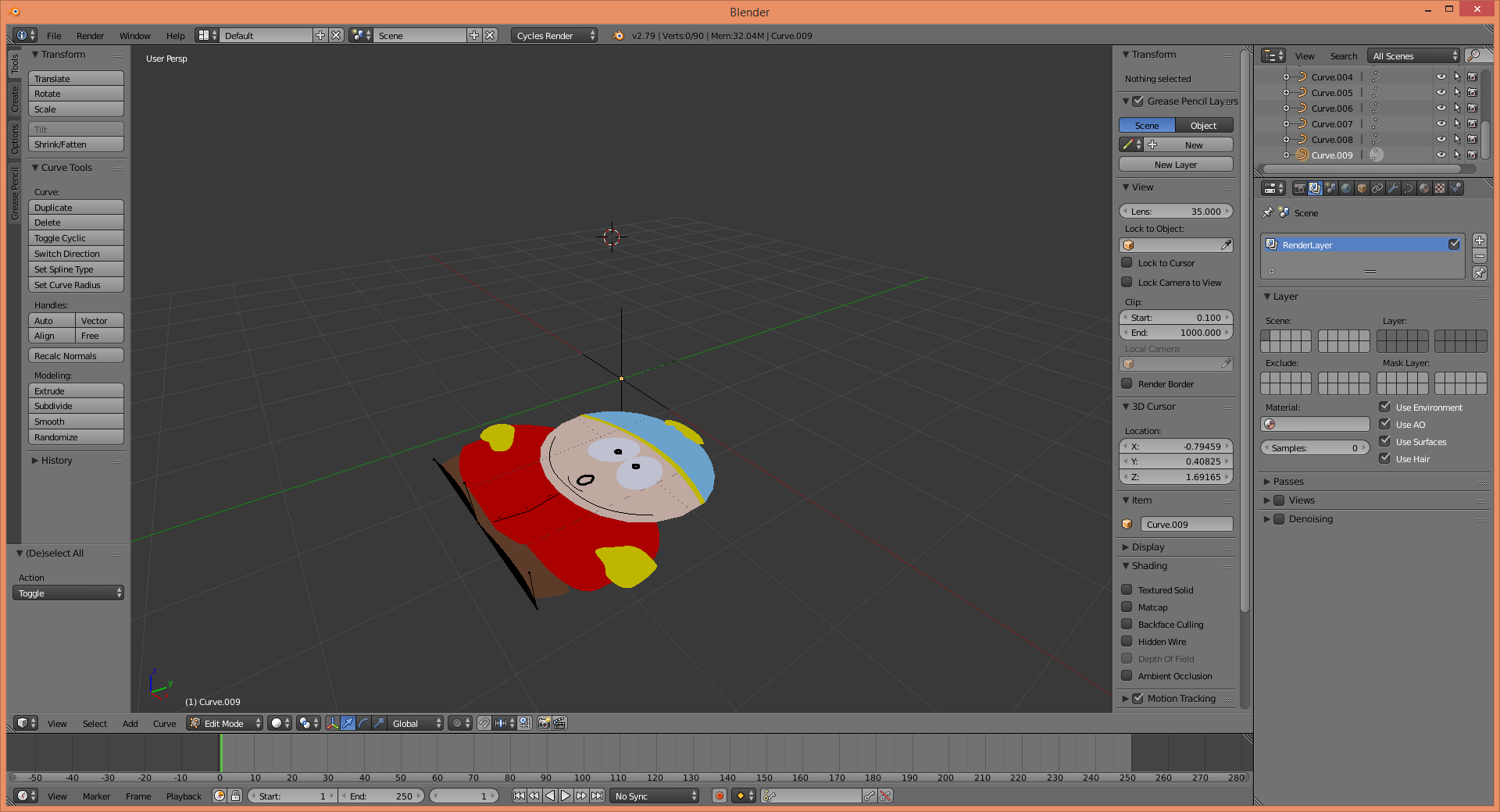 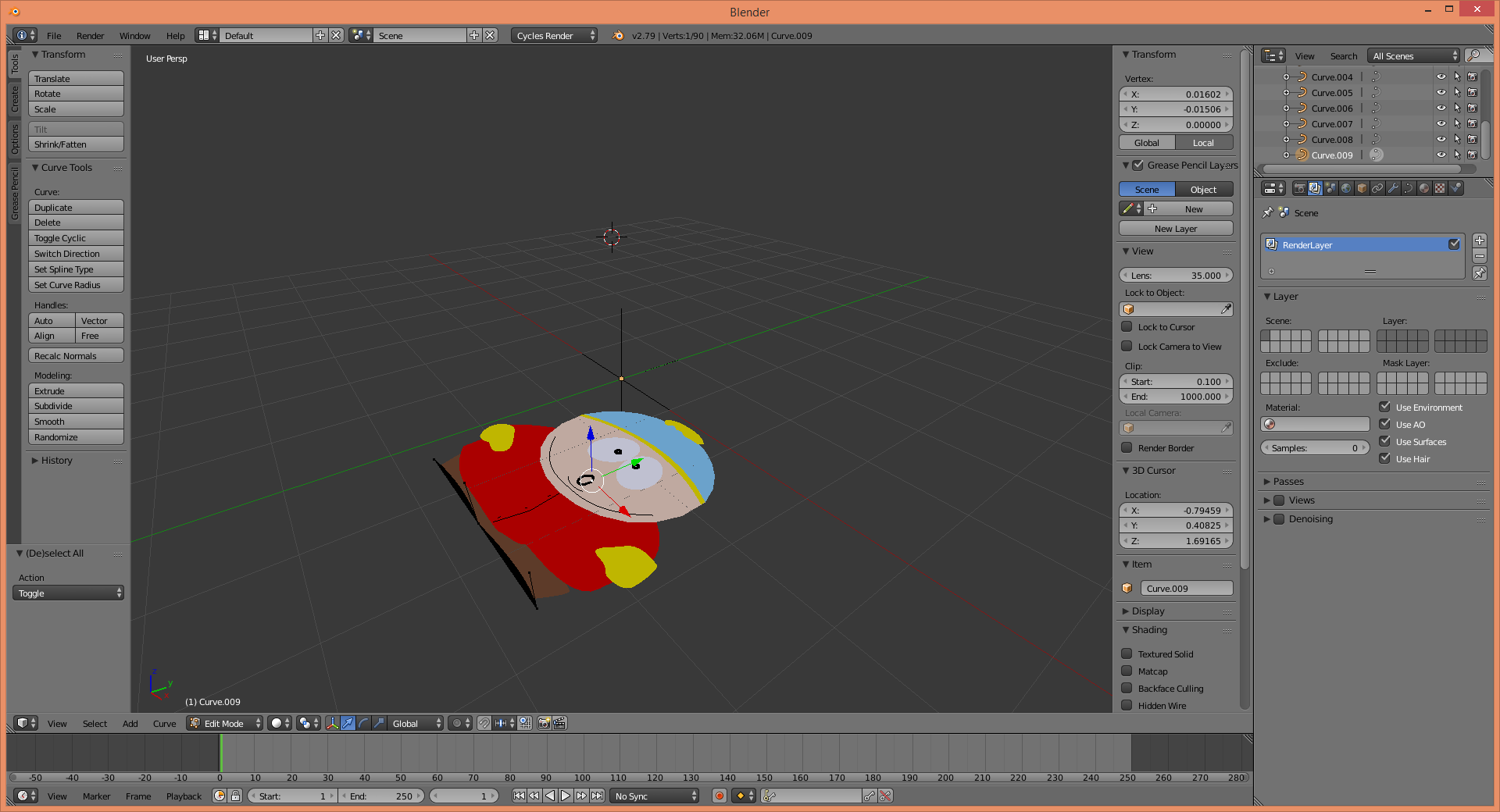 Press ctrl + L to select all the vertices on the same curve. 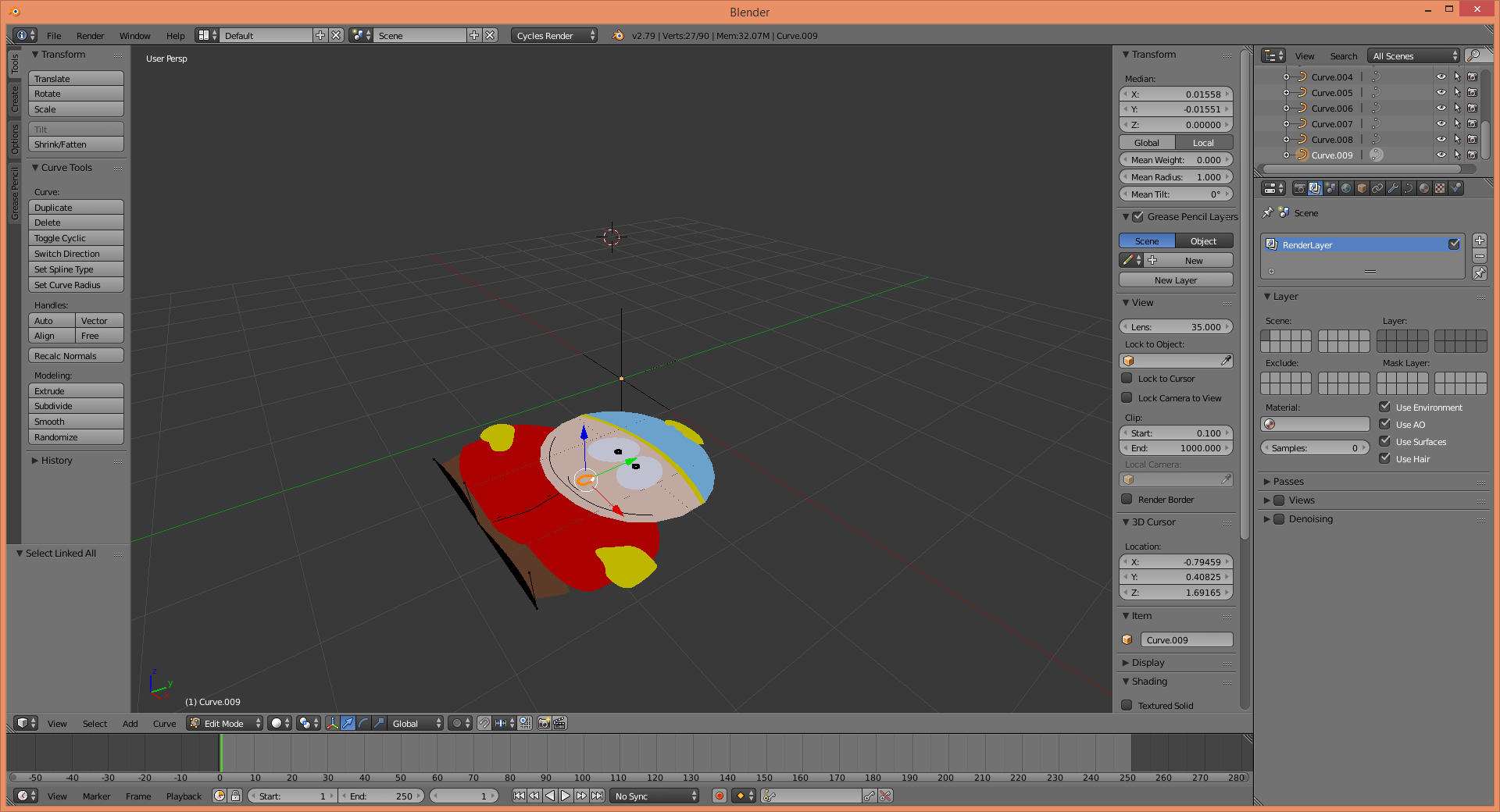 Then press F to fill the shape. Repeat for all of the shapes in the layer. 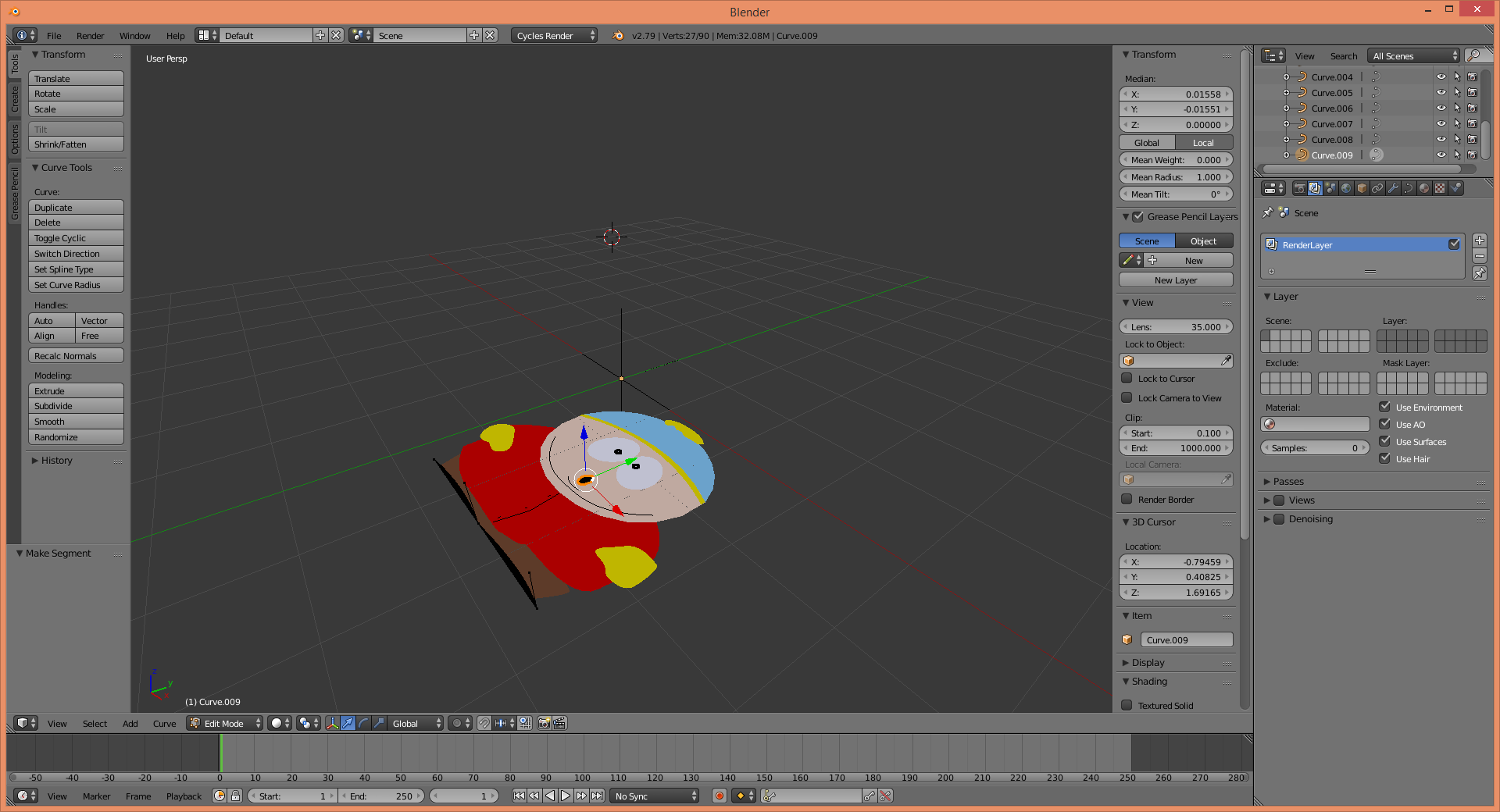 This now gives us a final image that can be moved around and scaled normally by the empty, that has no pixel aliasing. You might notice that some of the larger curves (such as Cartman's face) seem a bit low resolution. For these curves, we can adjust the curve resolution to make bezier curves and arcs render more smoothly. 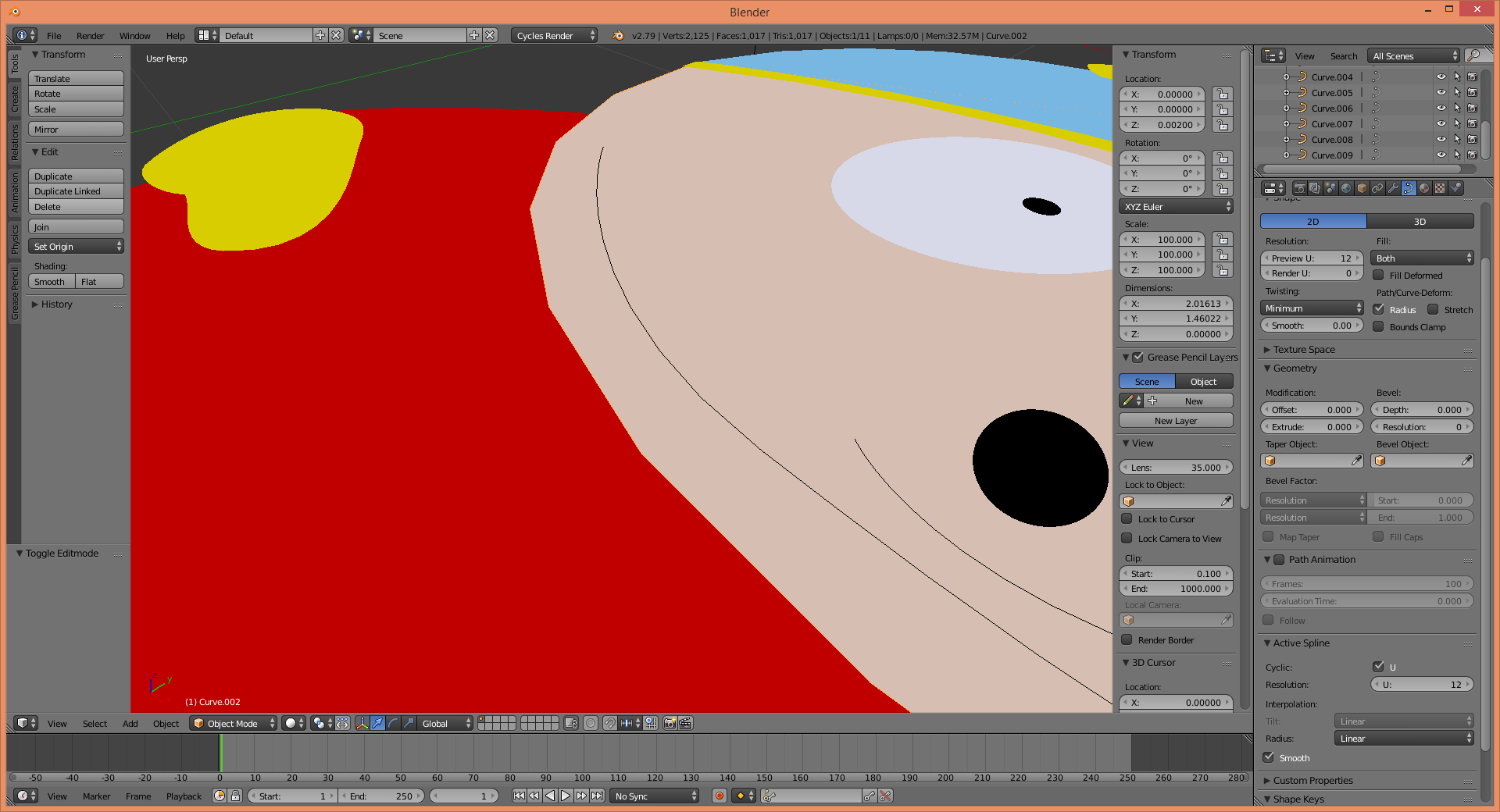 To do this, select the curve you want to change, and increase the resolution value (when Render U Resolution is 0 it copies from the Preview U Resolution, so I changed that value, but pick whichever you want). 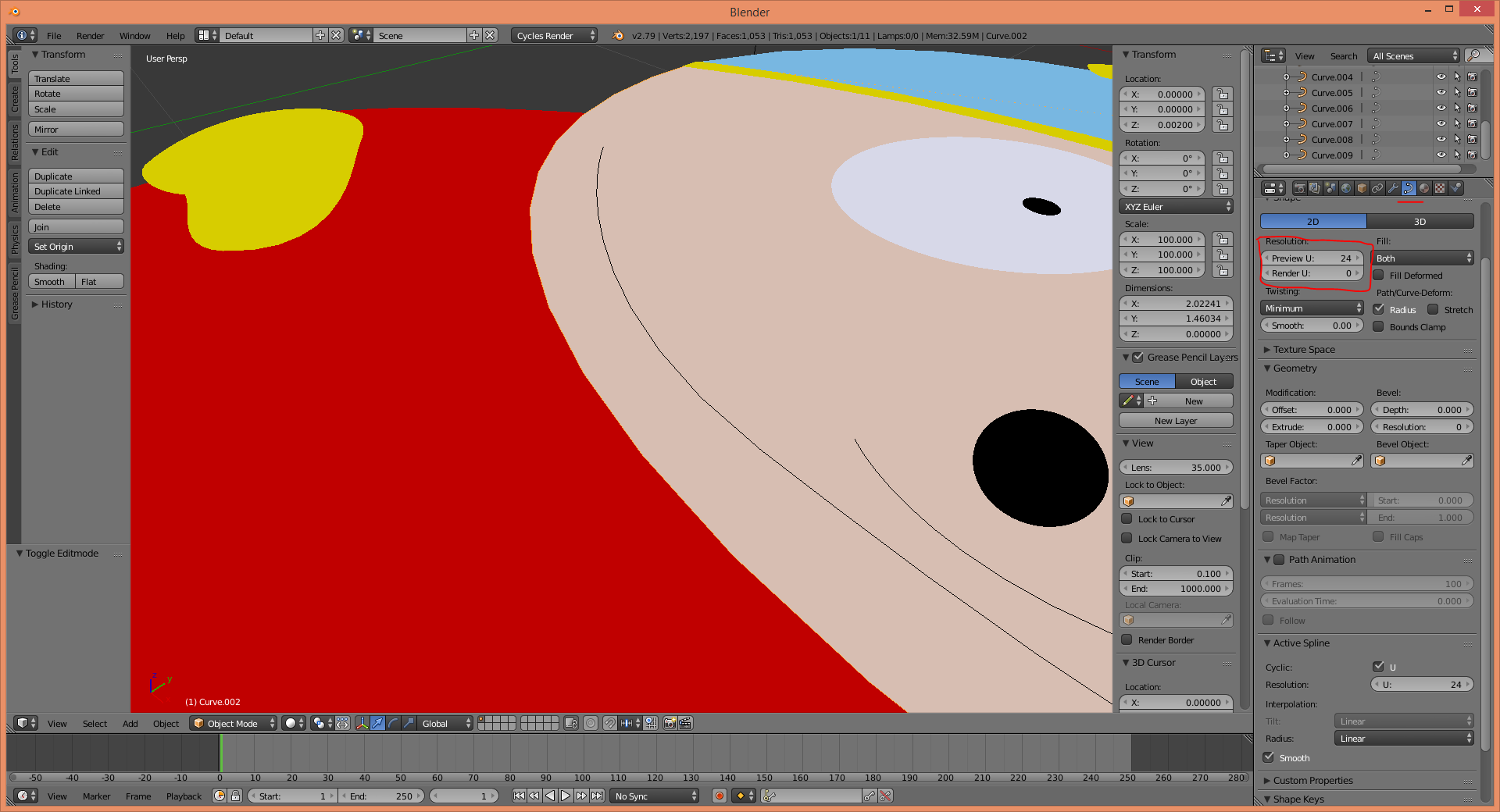 One final note: the lines on Cartman's chin and jacket will not show up in a render without some more tuning, or using freestyle rendering. This is because they aren't actually faces, just lines, which have no thickness, and therefore don't show up when rendering.

Make curves in the keyboard in shape of all keys, modifiers>solidify. Move slightly above all the base layer textures. Done. Crisp and detailed because it will be a mesh. To make it a "constant" color, use an emmissive node directly to surface on the shading tree, and check intensity. You´re ready to go.

Not the answer you're looking for? Browse other questions tagged uv uv-image-editor vector-mapping or ask your own question.

31
Why can't I import a SVG file from Adobe Illustrator or Inkscape?
7
When is cubic texture interpolation helpful?
7
Using SVG to put label on bottle
0
Texture graphic displaying/outputting as low-res/blurry

0
Uv map vertex = mesh vertex
1
Repeating Image Textures to UV map
0
UV map affects the color of the mesh
0
Update edges in UV map after editing mesh
1
How can I see a rescaled image in UV Editor?
1
Image Texture scaling
1
How to mirror a UV map using only vector nodes?