Uninterpretablity in depth maps: why the pixel values do not necessarily represent a valid distance?

I am rendering depth maps from different angles for many meshes by placing my cameras on a sphere with fixed radius. The meshes I use are all normalized (all within a sphere with radius 0.5) and centered at (0, 0, 0). After rendering I load the depth maps in Python using imageio package or scipy.ndimage.imread I noticed that each individual depth map always has a maximum value of 255. However, what I actually expected was to obtain depth maps whose values are interpretable and intuitive. By interpretability I mean a distance of 40 in one depth map rendered from mesh X will be the same as distance 40 of another depth map rendered from mesh Y. But this is not the case as of now, even within the renderings of the same mesh. To make it more clear: if I have a very small mesh whose furthest vertex would be very close to (0, 0, 0) I would still have values of 255 in the rendered depth maps. However, I will still have pixel values of 255 in the depth map renderings of another mesh which is much larger than the previous one. The same issue persists if I normalize the output values of the Z-pass: all renderings have a maximum value of 1. I'm afraid the issue is related to the PNG saving pipeline that might be doing something weird to the rendering results, as discussed here. So I wonder does anyone know if I am doing something wrong? Any thoughts/solutions would be greatly appreciated.

FYI, here's the code I use for rendering:

Update: I just did file depthImg.png in Ubuntu and confirmed that the generated depth maps are 16-bit. It's likely that the image packages in Python do not support reading png files with more than 8 bits per channel! I tried a couple of methods and non works. Any solutions for this?

The resultant image should now contain the correct depth information. For example, it can be loaded into the compositor, normalized, and passed to a Viewer node as shown : 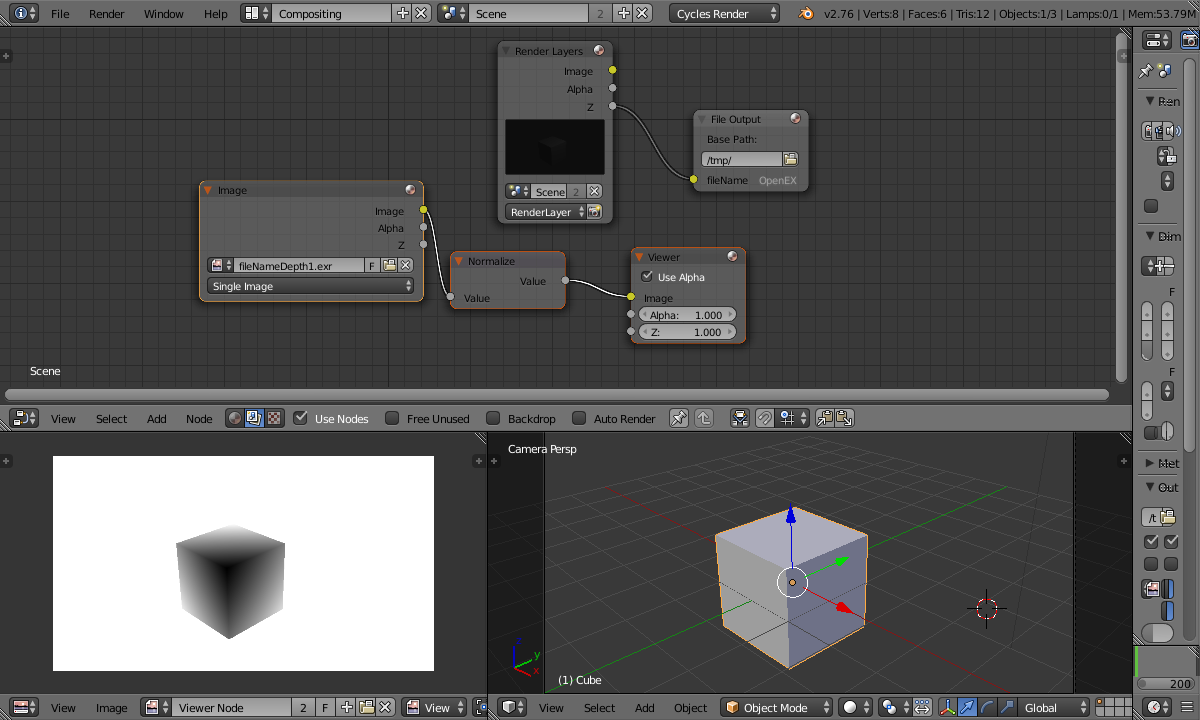 Not the answer you're looking for? Browse other questions tagged python cycles-render-engine rendering image color-management or ask your own question.

2
Why depth map renderings stored in 16-bit PNG turn out to be 8-bit?
1
Unable to store renderings in OpenEXR when using the multiprocessing in Python (Blender freezes)

2
Poor focus in Cycles render
0
Rendering Output suddenly not working?
1
How to project back rendered depth maps to recover the ground-truth 3D shape using Blender?
2
How to obtain accurate depth maps using nodes and visualize them?
2
Why changing camera's far clip does not seem to clip the distance for depth map rendings?
3
White Noise in Blender Z Pass with alpha value in Mix Shader
0
How to get Z-distance (not depth) from camera to object for every pixel in the frame?
4
Discontinuous large values in depth map