I'm quite new to the animation Nodes concepts, and tried to follow this recent tutorial (https://www.youtube.com/watch?v=GzeP---dP1M&list=WL). The point of the tutorial is to generate a bunch of random splines all from a first spline, and then add some moderate noise (in location) to each point from each generated spline. You get a nice cooked spaghettis effect.

Works ok, but then i tried to replace the script subprogram by a wiggle vector Node (see 6.20 in the video). But i just don't manage to get the vector wiggle randomness (seed) independant from the Getpoints Loop. My splines stay "parallel" whatever i try. My guess is i should try to generate a random integer outside of the GetPoints loop and plug the result into the seed of my vector wiggle, but i just don't get it right.

I'd appreciate any suggestion. 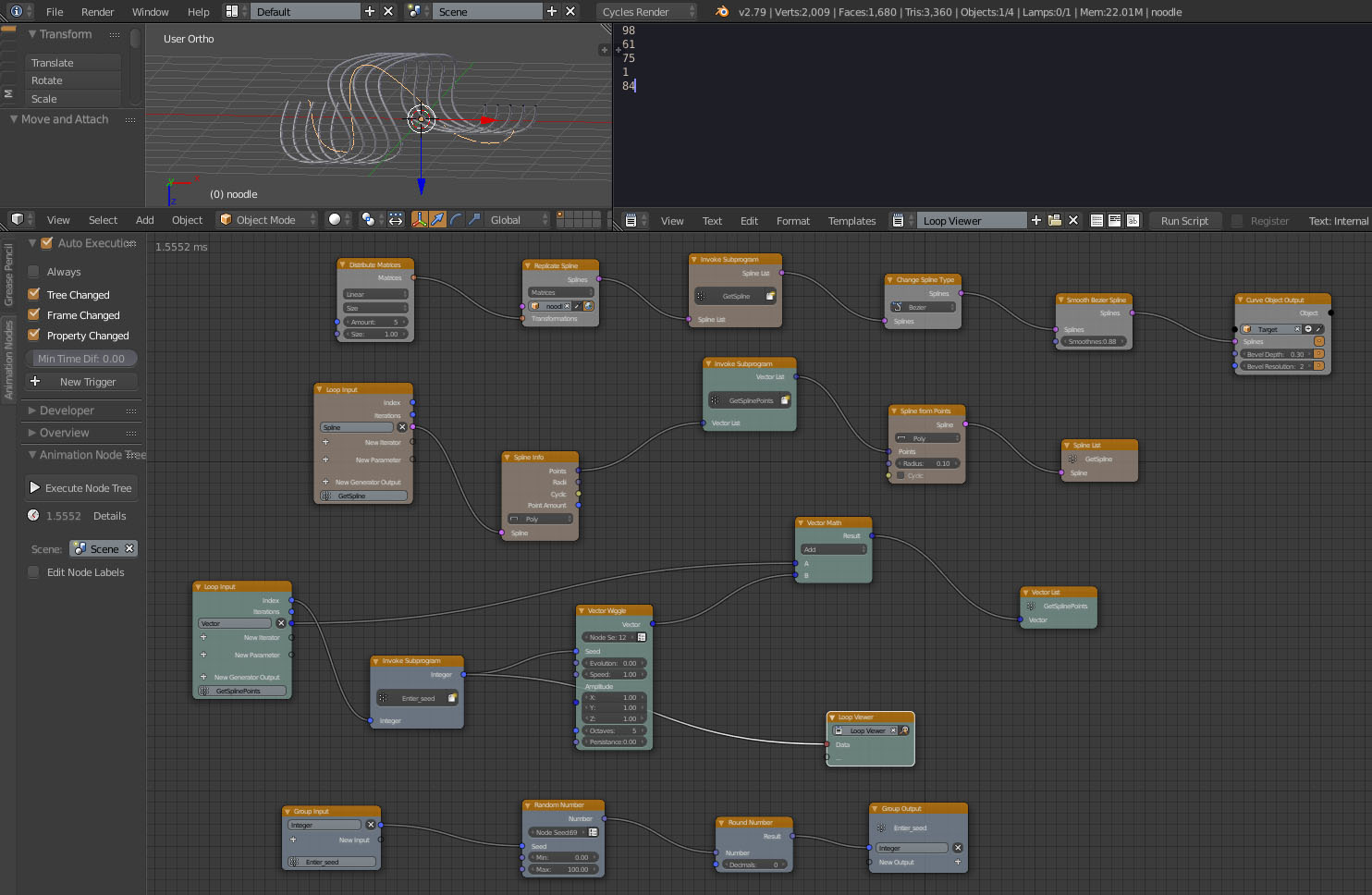 It seems you are confusing some concepts. The noise function used in the original tutorial is 3D noise based, meaning it is evaluated at 3D vector locations and not seeds (Integers). The Wiggle Vector Node is 3 1D perlin noise each of which assigned to one of the channels, and it gets evaluated at a float (1D instead of 3D), this float is the evolution value you see in the node. So the wiggle node is now acting merely as a random vector generator. If you really want a similar function to the one used in the Script Node, check my answer here, which explains how such noise function can be used. Now that we got that out of the way, lets examine your node tree and try to get it to work as expected

You don't need to generate a random number to use as seed, seed is arbitrary, it only matters that it is different, and thus you can use the index directly. Matter of fact, the random numbers may repeat while the index will never, which ensures different results for each iteration. Moreover, float can be converted to integers implicitly, so you don't need the Round Node.

It is true that you are changing the seed for each of the individual points of the spline, however, they are constant across splines, that's why they seems identical, what you need to do is to use the index from GetSpline loop as a factor for computing the seed in the GetSplinePoints, you can use the random number generator for this, or simply use a linear combination between the index from the upper loop and the index from the lower one. An example for the linear combination: 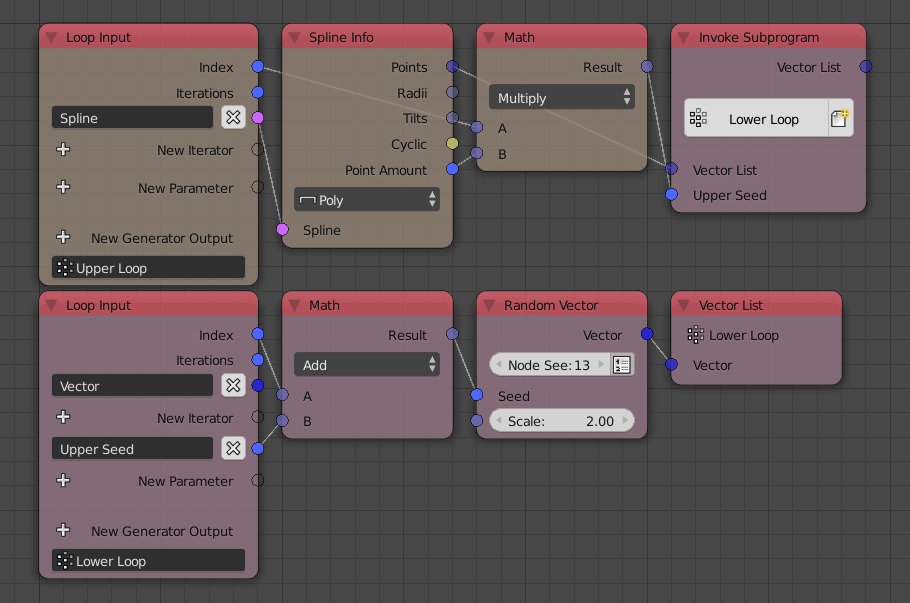 So you see that for any combination of $x,y$ belonging to the domain,the output is distinct and always exist, that is, the function is bijective. And it can be safely used as seed.

As described in the foregoing sections, the wiggle node is now merely acting as random vector generator, to actually make use of it as a perlin noise generator (That is 1D, unlike the one used in the tutorial, meaning you will not get the same results), you have to use the evolution parameter which can be the seed of the points. Take a look at the documentation for the Wiggle Nodes to have a better understand of what it does. An example would be as follows: 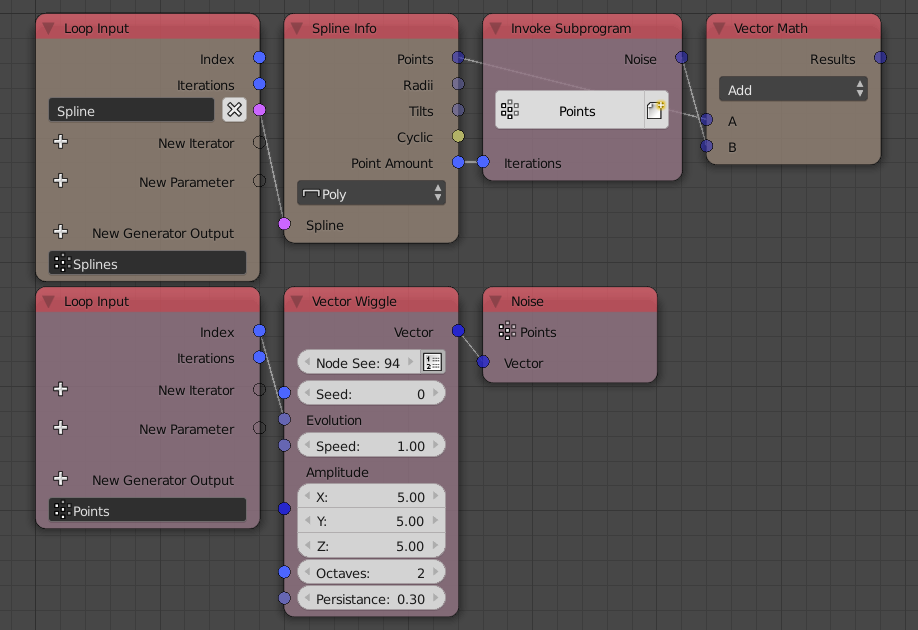 Spline info will only return the handles locations, the problem is that the points may be very few and the result of the noise may not be apparent, instead, we can evaluate more points on the spline and use them instead. Evaluate Spline Node can be used: 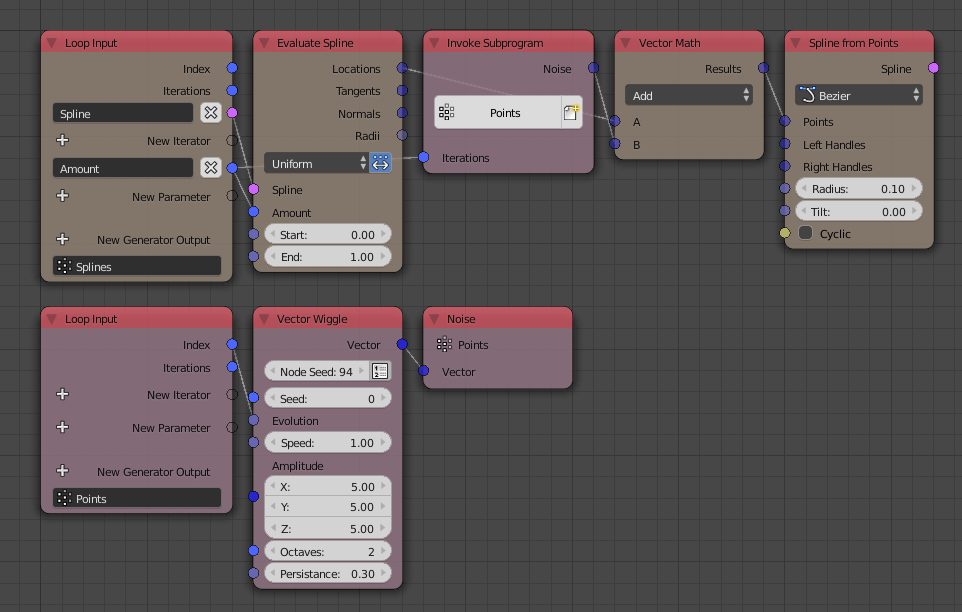 The use of the Replicate Spline Node in the tutorial or your node tree does not seem to be correct, you don't want to have spline that are distant as they are now, instead, one can simply input the spline as a parameter and control their amount using the number of iteration.

Don't create the splines as poly and convert them to bezier after that, just create them as bezier directly. 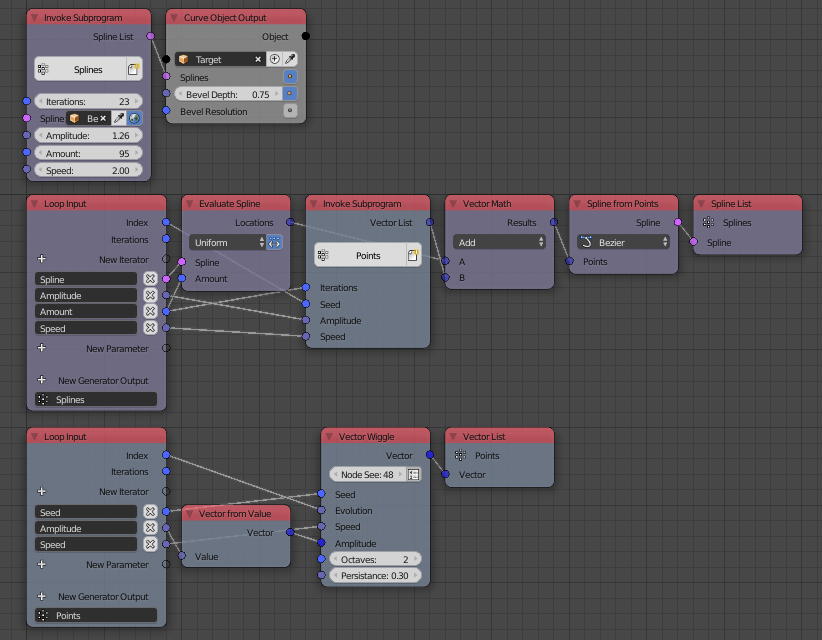 Which is similar to the result of the tutorial.