I'm making an indoor scene with a storm outside. I want the windows in my scene to have rain just bucketing over them. Ideally I would like some animated effect that can be composited over the background, which might be something like a bokeh image. How can I achieve this?

I gave it a go with a shower of particles. This may be a little bit too resource-intense for just a background feature though.

I created a simple "room" with 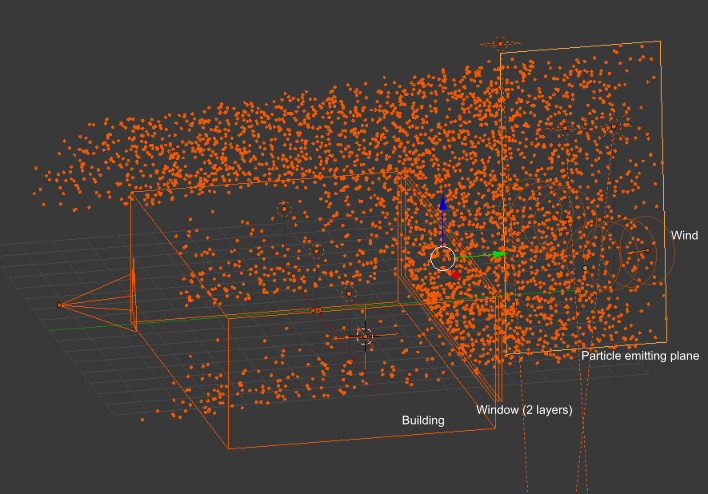 The building and the inner window layer are set as Collision objects with "Kill particles" activated.

The outer window is a Collision object with very high stickiness (no kill), and high damping/friction on particles.

The particle system has strong Normal velocity and low Gravity field weight, so that the rain drops don't fall off screen too quickly; "Object" > "Icosphere" is selected as "Render" option, with "Emitter" un-checked.

(this preview is from an earlier version, with less particles and less friction on the surface)

By giving the icospheres and window layers a Principled shader with very high transmission; adding some orange streetlamps and violet "dusk" sun (and a sad Suzanne in the storm); with some DOF and motion blur: this is a very rough result:

Using nodes and a "Geometry" input, I made the raindrop's shader completely transparent (shadeless) when the "y" coordinate is less than y0 (the position of the window) to cut away the part of the sphere that "permeates" the first layer.

Even heavier for a close up shot (with metaballs)

If you want a close-up shot as in here, an additional Particle System with similar physics, but from a nearer plane (just near the camera) and with big meta-balls as DupliObjects, can help: 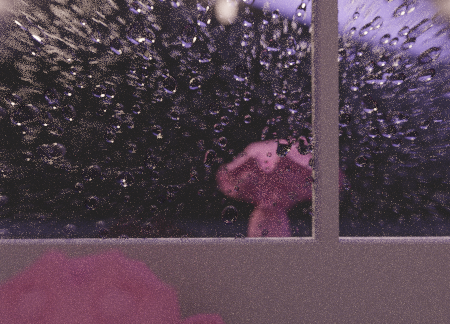 Not the answer you're looking for? Browse other questions tagged materials compositor effects or ask your own question.

14
How to create a gradient backround in the compositor?
1
Video Sequence Editor Alpha Over png transparency speed control effect
9
Soft lighting through translucent material in cycles
1
transparent overlay over image
0
Render Result doesn't match my background image in Camera View
3
How to achieve anime-like smears in blender?
2
Alpha over node is including unwanted objects in the image?
2
How Can I create this Slime dripping down effect?