I have a handful of these strange normal maps I need to use in my scene that store X in the Alpha channel, Y in the green channel, and require you to calculate Z with the following formula:

Despite figuring this much out, I haven't been able to produce a node setup that can correctly convert this into the desired purpley tangent space normal map. 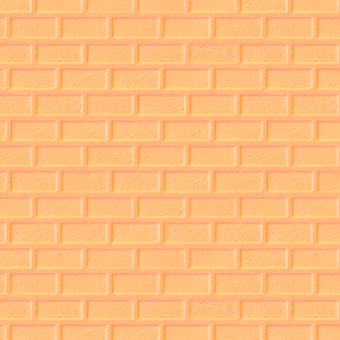 Ok, first thing is to split out the channels with the separate RGB node. We'll put down a few re-routes too so we don't go nuts and mix channels up: 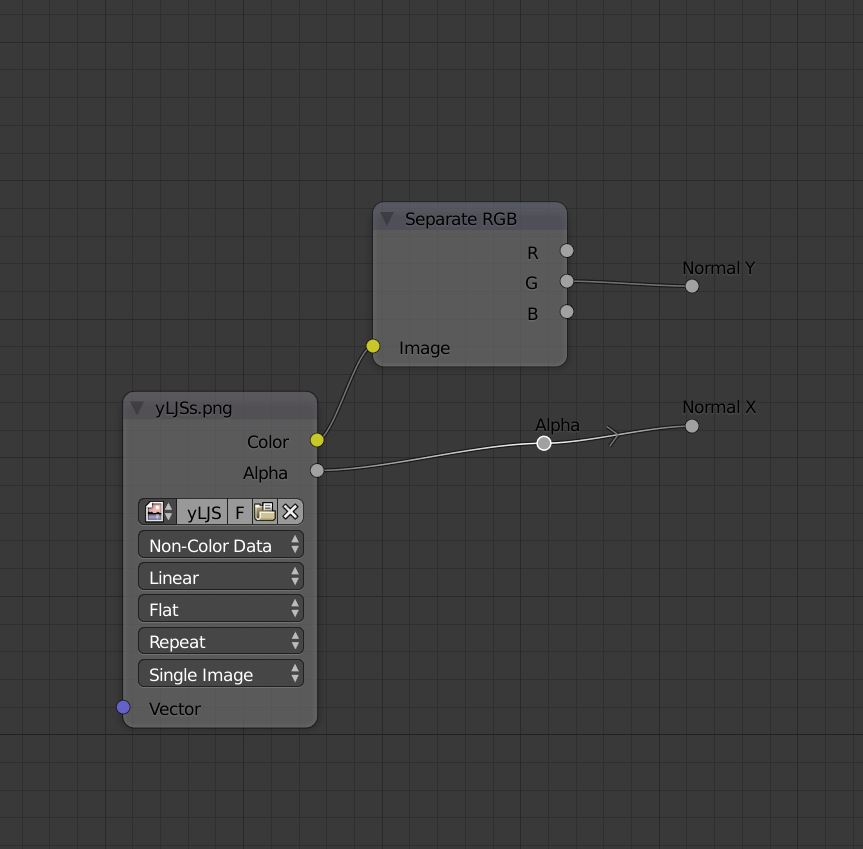 Next, put in a Combine XYZ node to recompile the channels together. (note that you can use a Combine RGB node here instead of you like, they are identical aside from labels and the color of the output socket. Color and Vector and both a generic vector3 format inside Cycles, they are only differentiated for UI clarity reasons). 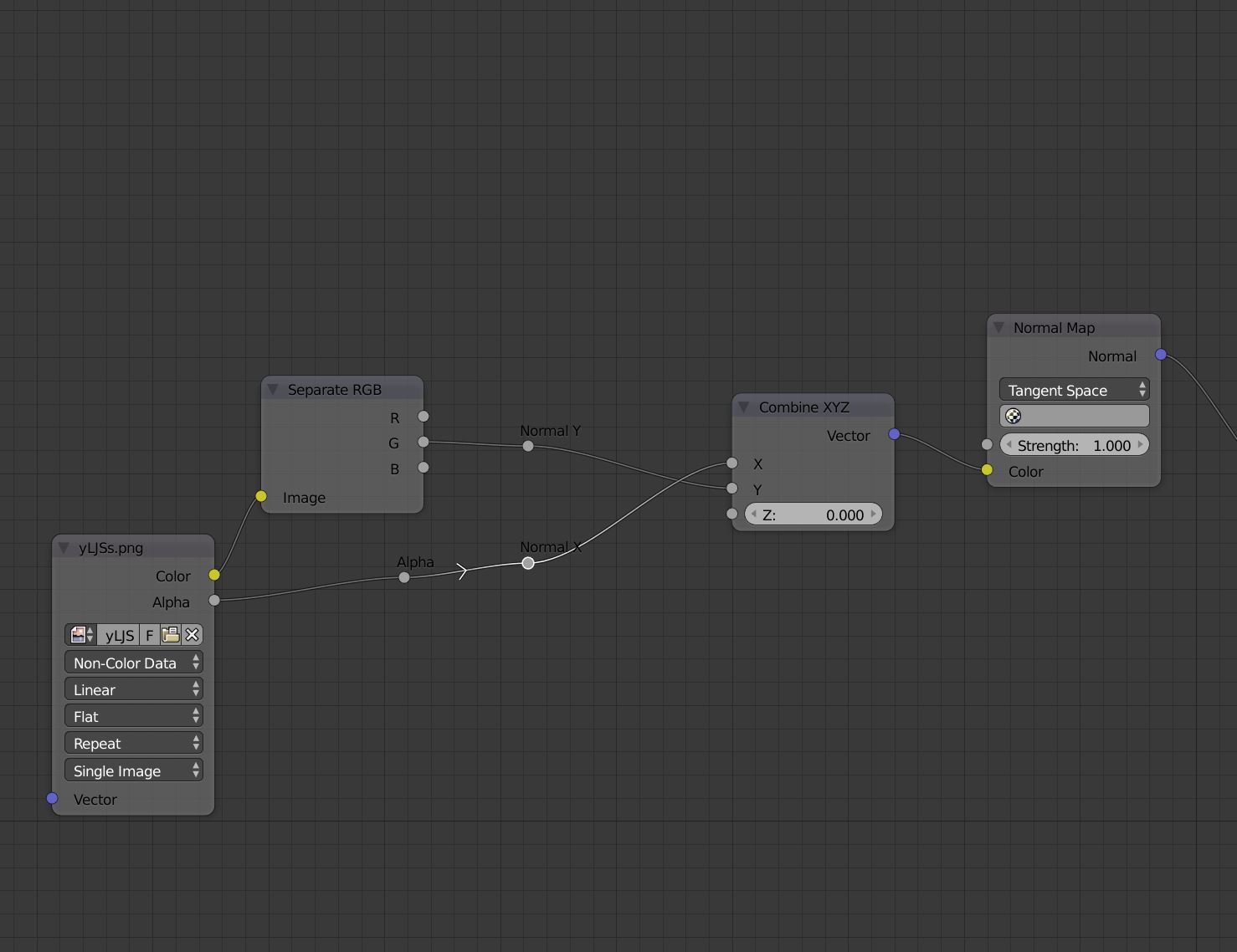 Now, currently we have Z=0. That's not going to work. As you noted in the OP, we need to derive Z from X and Y. The reason for this is that X and Y have already been normalized so the full XYZ vector is in a 0-1 range. Thus we can't just shove a 1.0 in there, we need to actually compute Z using the forumla you have above. (note that this setup is exactly what the Unreal 4 engine DeriveNormalZ does under the hood).

First the multiplications within the parentheses, X * X and Y * Y: 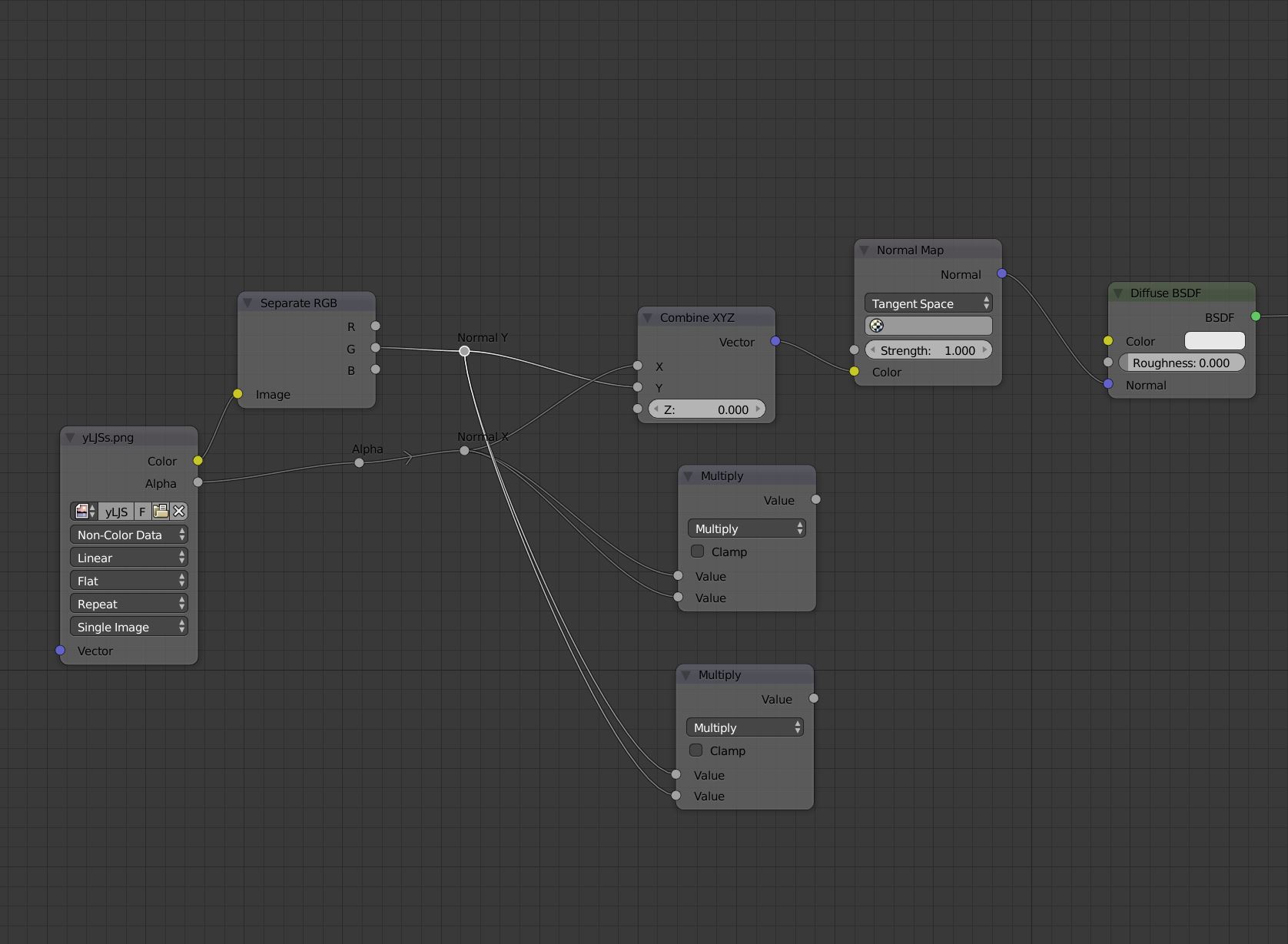 Then sum the result: 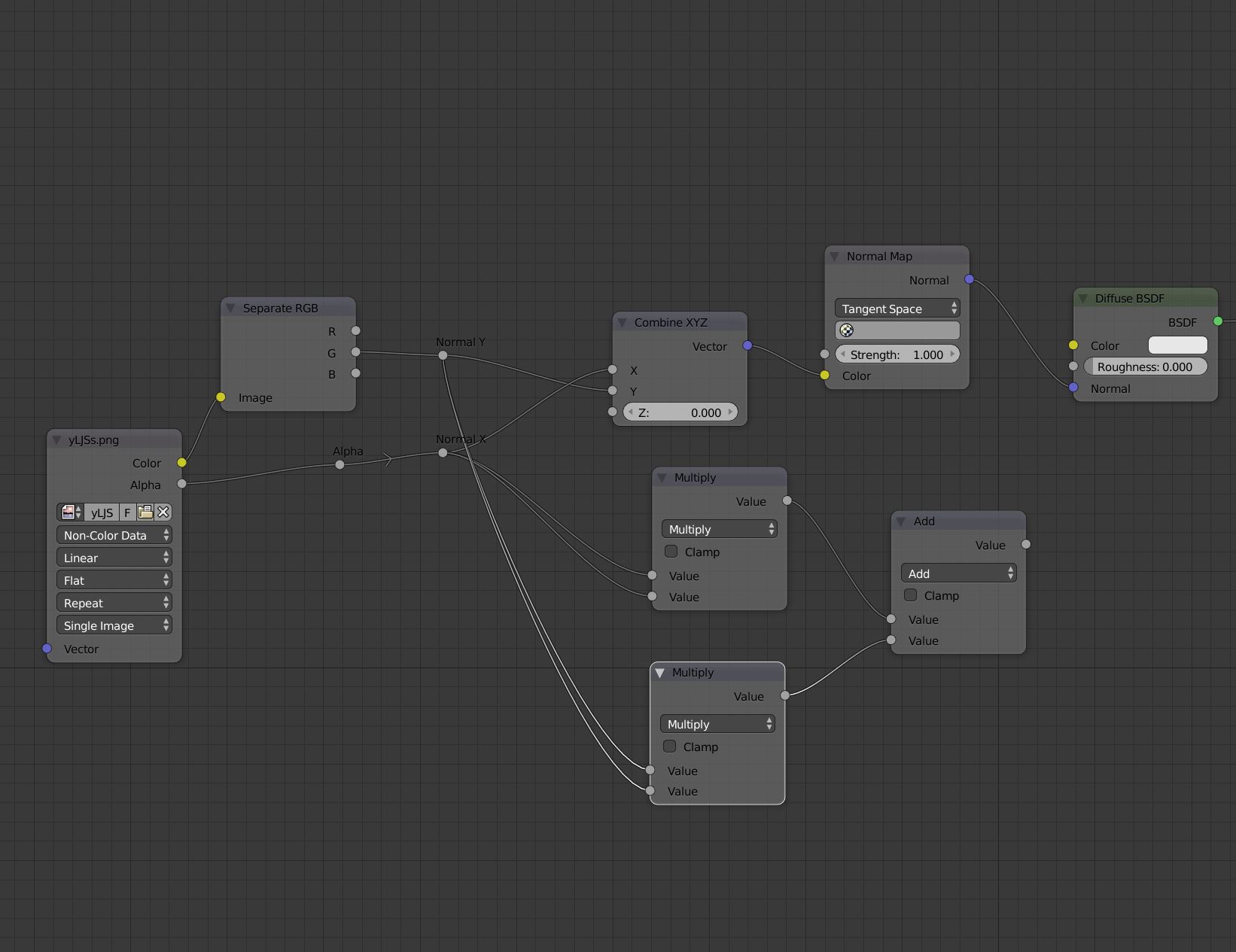 Now we need the square root of that result. That's the same as raising to the power of 0.5, so one more math node:

Finally, the particular normal map you provided appears to be DirectX formatted, so we need to flip the G(Y) channel too: 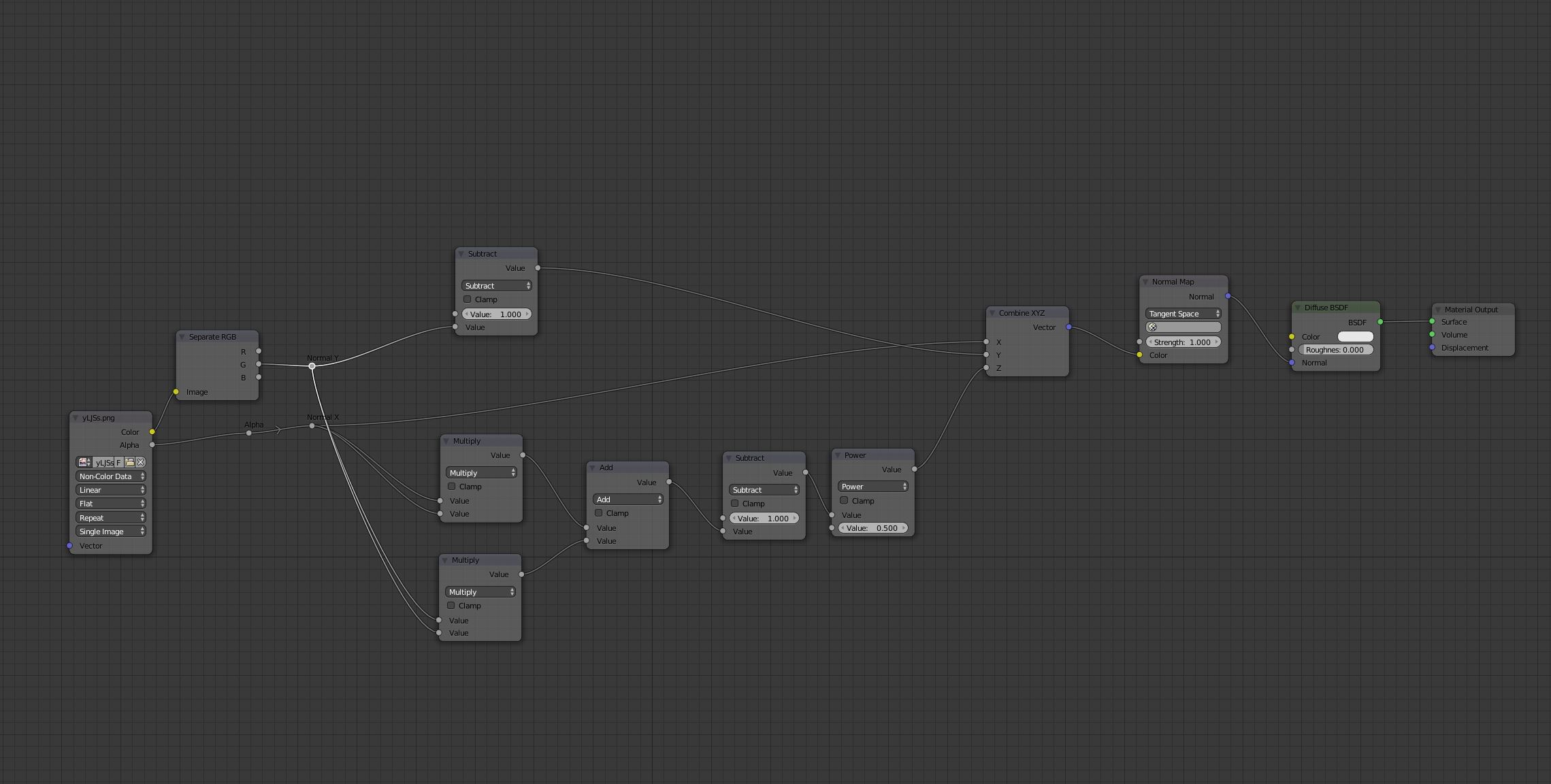 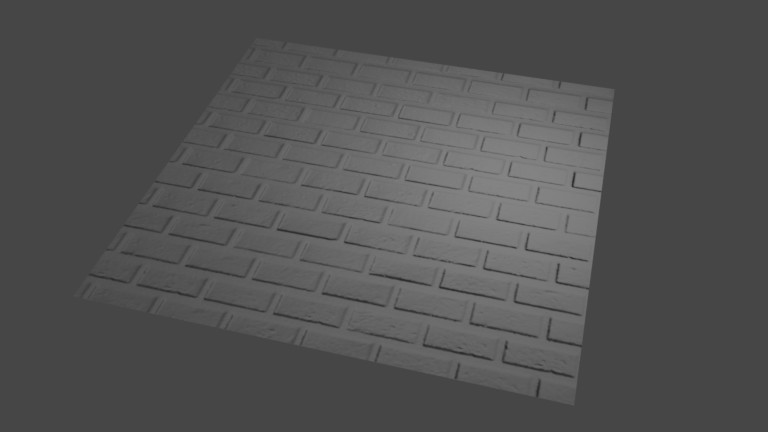 I managed to generate the Z channel in the normal map according to this scheme (taken from UE4). In the "normal" texture, everything is as usual, only the Blue channel, replaced by roughness.

Not the answer you're looking for? Browse other questions tagged materials nodes shaders normal-map mathematics or ask your own question.