How to change mutiple parts by changing just one?

Let's say I'm changing the scale of one face and subdividing it and whatnot, but I have 20 of those faces. How do I just select all of them and change one so that it also changes all the others in the same way I changed the first one?

I'm making a castle, and I have a design to make, but I don't want to do it to every brick, I just want to select one, make the fancy design, and then it would be on all the other bricks so that they would all look the same.

modeling mesh modifiers
Share
Improve this question
edited May 19 '14 at 10:40

There are several ways to do this: 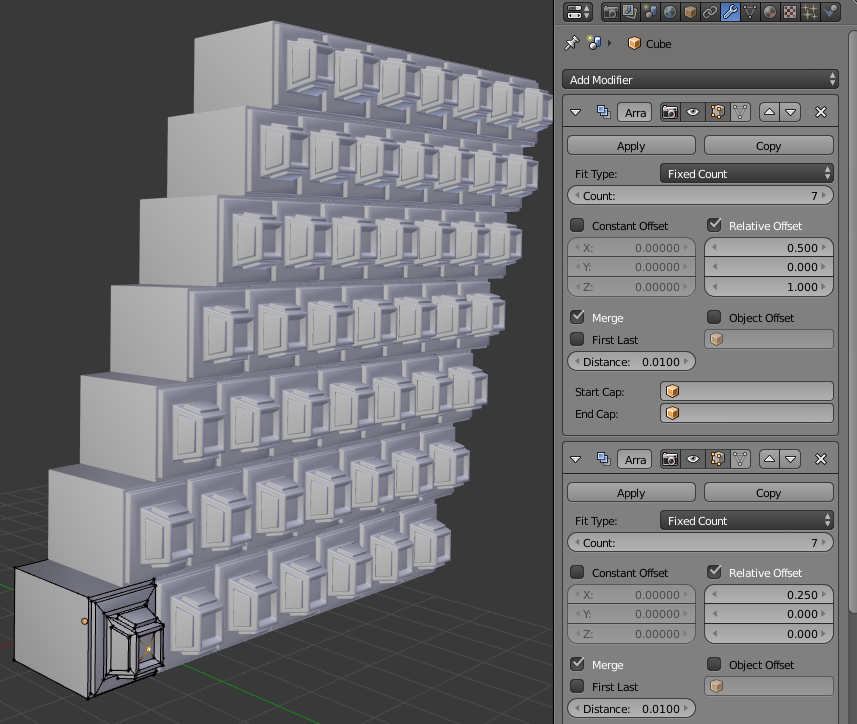 You can link the mesh data of two objects together by press CtrlL> Object Data. Note that this will make the mesh data of the objects identical, however you can still transform (scale, rotate, etc.) them independently in object mode.

Dupli objects are used to display instances of an object on the vertices or faces of another object. They can also be used to display duplicates of the object in time (dupliframes) or an entire group of objects. Duplifaces are faster and use less memory than the array modifier, see Applying Array Modifier - Still instance?.

You can also use them to make an instanced array modifier (which does not use instances), giving a performance boost. See this question.

You can do pretty much the same things with particles as with dupliverts and duplifaces, however you have more control over the orientations of the instances.

Plus you can also do some interesting tricks with hair particles or particles with physics.

You can do this to some degree with normal modeling tools (useful for some quick symmetrical actions), however for creating something like a tiled wall the other techniques are probably better.

See Mirror changes to side of cube across all six sides

OK. I'm going to answer just a bit outside the box here. I agree that each of the methods Gandalf3 mentions in his answer work to do what the Androidmaster wants to accomplish. But to me, this is essentially a workflow issue. Before start Blender to begin a new project, I spend some time thinking about how I want to do the project, and what I'm going to want to do. If I were to model androidmaster's castle, I would have decided before I launched Blender which elements I would be modeling from scratch, and which I would be duplicating. If I know I'm going to want some elements to mirror other elements, I can then decide how I want to do that, and plan my workflow accordingly, because the final result one wants to achieve with the model will affect the choice of duplicating one chooses to use.

11
Mirror changes to side of cube across all six sides
8
What techniques have been used to repeat geometry or other detail to the infinite horizon?
2
Applying Array Modifier - Still instance?
0
Modify multiple objects at the same time (f.ex.: 8)

3
How can I lock transformation of an object's vertices, edges, and faces?
0
Modeling a Brick Tower for Game Engine
0
How to make more then one character from one rigged mesh
1
Radial Symmetry in Editing a Single Object
1
How to separate meshes that are converged into a single object
1
Apply modifiers in all objects at once