UV's not updated in Textured view when in GLSL material mode

Only when I set Viewport Shading to Rendered does everything appear correctly.

Am I missing something about GLSL mode? I created a UV sphere, and it always shows the original UV's from before I did my own unwrap on them.

Blender behaves in a way designed to help make UV Editing/Texturing easy. Which can be a bit confusing at first. 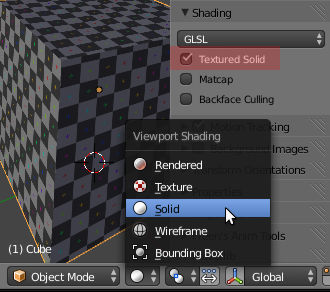 In object mode selecting a UV Map will still switch the UV Map and image used in the 3DView but not the image shown in the UV Image Editor.

When unwrapping objects this is helpful but it does override the texture setup for the material. So for the texture shown may not be the same as what gets rendered.

When using Cycles it can seem a bit trickier. With Texure shading it uses the UV Map selected but uses an image from the active Image Texture node (the selected -or last selected- image node in the node editor) from the objects material.

When using Material shading it gets an approximation of the images used in the material, that is image nodes connected to the output with other nodes mixed in also altering the appearance but they don't give the same result as when rendered. Any uvmapping adjustments being fed into the image nodes also effect the result seen in the 3dView.

Not the answer you're looking for? Browse other questions tagged materials 3d-view uv or ask your own question.

1
How do I set up a material with diffuse, normal and alpha (transparency) maps?
2
How do I get lit textured materials in Multitexture BGE?
3
Displaying keyframed opacity / transparency in Material mode in viewport?
3
BGE everything white in playmode
0
Help with texture mode in viewport
0
Absolutely black object in 3D view/texture display
0
Material does not react to light and looks shadeless
0
Objects not showing in viewport on Solid view