Motion Tracking not working for Eyeball

I'm experimenting with motion tracking an I'm a little stuck. My plan is to track the motion of an eyeball from a video an let an animated eyeball repeat the same motion.

And in principle it works. If the attached image was a video you could see that the eyeball in fact moves according to the track. However only very little (track is highlighted in red). I even get why: The path of the track is (since it is eye movement) very little. I want this little motion to rotate the eyeball by something like 45° which of course it does not.

Is there a way to sort of amplify the movement from the track? 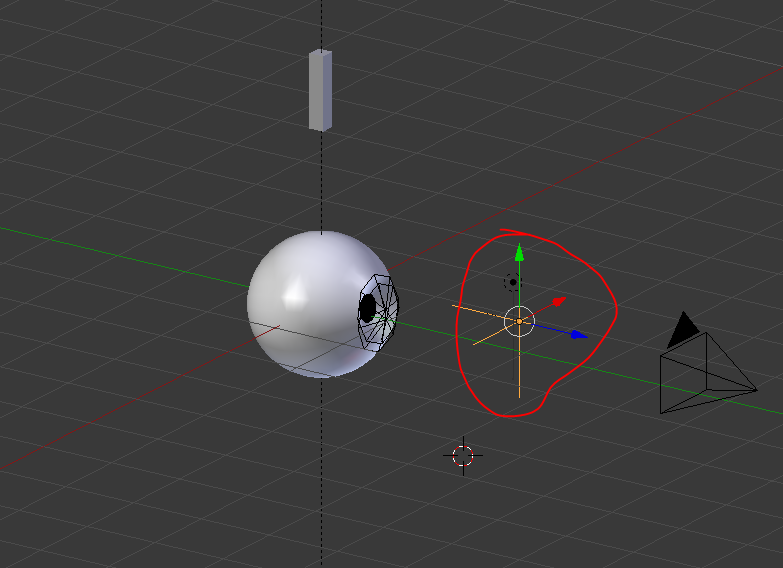 The Follow Track constraint includes a 'Constraint to F-Curve' button - click that and Blender will convert your track into a series of keyframes. You can then use the Graph Editor to edit the resultant F-Curves for the object.

To edit a curve, right-click on one of its points and press L to select 'Linked' (ie, select the whole curve). Then use S to scale it (you can type a number to scale by a fixed amount if desired - eg, S10Enter) to scale up by a factor of 10. Repeat for each of the X, Y, Z channels.

Once you've scaled up your F-Curve you'll find that the motion of the empty used for the track is similarly affected, resulting in more motion for the eye.

The 3D (Blender) eyeball is parented to the Lever (plane) B.

Lever B is told to look at ('Track To' constraint) an Empty placed at the eyball end of Elbow A.

Elbow A is told to look at ('Track To' constraint) the brown cube.

Note that when an object is told to look at (Constrained to 'track to') another object/Empty, it will be looking at that object's pivot point which is where the Gismo coloured arrows sit when you select it.

Lever B's pivot point is at it's far end, and that is set at the center of the eyeball.

Elbow A's pivot point is down at the camera end, at the corner.

If the brown cube can be parented or moved by the motion tracking then you'll amplify the eyball's rotation.

Should the motion tracking be a rotation, place a lever at the center of the rotation (pivot point) and parent it to the rotating object. Have the brown cube parented to an Empty placed at one of the lever's ends so it moves in the axis shown by the arrows.

Not the answer you're looking for? Browse other questions tagged tracking motion-capture or ask your own question.

3
Why does camera this tracking fail completely even when the solution value is very low?
2
Motion Tracking - Link track to empty and move camera instead of empty
1
Motion Tracking Markers don't show up!
1
Why don't my tracking markers stay in position?