I tried to scale an object alongside a specific dimension with the set_matrix function from the transform module in Blend4Web.

Here is an example matrix applied by set_matrix

Expectation: It should be scaled to 0.1 on X.

Result: It was scaled down approximately 0.8 on X, Y and Z. 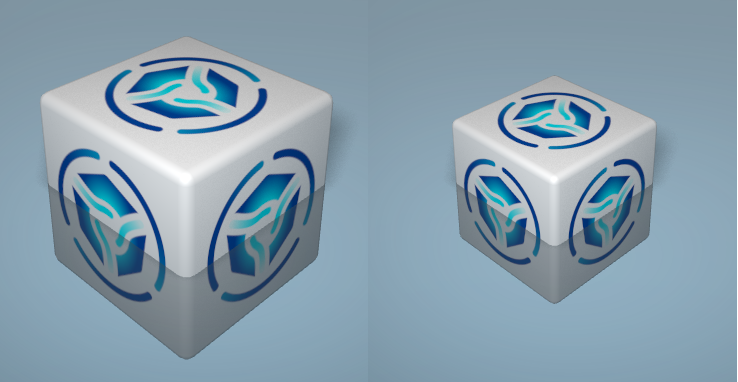 Left is the original cube, the right is transformed with the matrix as defined above.

then I assigned different values to a, and find many anomalies, the two most noticeable:

The funniest case when a is zero, because in this setting the transformation matrix spans only to 2 dimensions, which should collapse the cube to a square... well it makes it a slightly smaller cube, but at least it collapsed my mind to the null space.

I made a self contained example in a project, you can extract it into your project folder. This reproduces what I described, the only difference that it changes 2 basis vectors to null vector instead of one.

I changed two things on the default Blend4Web starter file:

The following code was written into the default Blend4Web JavaScript scaffolding, under the place your code here comment

I also added some extra features for testing, so you can update the transformation matrix of the cube from the inspector, using the updateMat(ind, val), function, for example:

and a matrix pretty printer function.

As it turned out recent Blend4Web (17.12.0) does not support non-uniform scaling (it will be added with the next release). Which also means: its 4D matrix module does not expose the real transformation entity, which it usess at its deepest abstraction.

However Blend4Web supports non-uniform scale animations exported from blender, and it is also possible to jump to a specific animation frame. So make a appropriate scale animation and wrote a code which interpolates between its frames.

I wrote a window-scaleresponsive input range GUI element with this method, the relevant code snippet should be rather simple for someone with a basic knowledge about the Blend4Web SDK.

You can download the whole source code and the corresponding .blend file.

Not the answer you're looking for? Browse other questions tagged scripting transforms blend4web or ask your own question.

6
SLERP (Spherical Linear-Interpolate) between two vectors from Python
7
How to make a true linear quaternion rotation?
2
bpy.ops.object.location_clear() Does not clear locations for keyframe'd objects
0
bpy.ops.render.render does not find camera
1
Apply linear transformation to a set of vertices
4
Linear curve to wave curve
1
Blend4Web does not render in Mac OS Sierra 10.12.6
0
Apply transformations does not work in automated process