One advantage of this feature with array modifiers is that it allows other modifiers below in the stack to work on a contiguous mesh with no splits.

In the picture below, I have 3 objects that make up a single whole: two arrayed objects, and another to transition between them. They need to remain as separate objects because they have different modifiers. But the splits where the objects' vertices overlap interrupts the subsurf modifier, creating artifacts like the one circled. 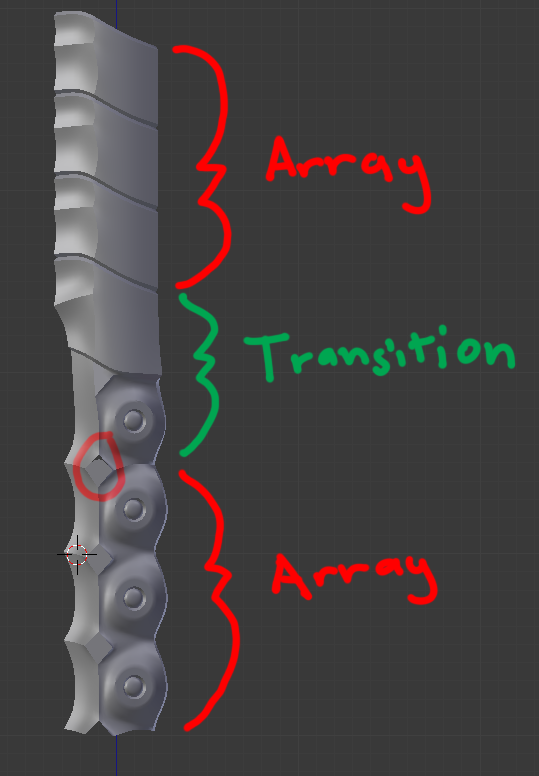 The start and end caps of an array can themselves be 'live' (unapplied) arrays.

If 'merge' is checked in the array modifier, the start and end caps merge with the arrayed object.

Obviously, there is no way to use different meshes as a single one. :-( All you can do, is snapping and removing doubles after you apply the array modifiers. And nothing forces you to kill the original non-modifiers-applied objects, instead of hide and keep them. And maybe you can create your own custom modifier to handle this.

Not the answer you're looking for? Browse other questions tagged modeling mesh modifiers objects or ask your own question.

4
Merging 2 objects, no loose parts
1
Apply a grunge texture across an array
2
Boolean union with overlapping faces
6
Does something like a Join Modifier exist?
1
How can I merge the last elements of an Array that fits a curve?
2
Shading Issues with the Array Modifier
2
How can you smooth out the transition between these two objects so that they appear seamless?
6
Erratic "railway" in Blender