I'm building an audio visualizer in Animation Nodes. It's working well, but there's always just a strong peak, rather than well distributed activity across the board.

I've been trying various settings in the Bake Sound node, to try and concentrate the sampling resolution on where the audio is most active, but I am still just getting a peak of activity concentrated in one area.

Here's a logarithmic spectrogram of the sound file I'm using (using Audacity). From this I'm reading that most of my frequency bands need to concentrate around 50Hz and 300Hz. Am I right?

How can I best set up the Bake Sound node to properly represent this audio?

In this answer I shall demonstrate what the Attack and Release values represents. Though, I will update the answer with more concepts and practical implementation as soon as I get the time.

In music production, there is a concept called ADSR or Attack Decay Sustain Release. When we define an ADSR envelope of some sound, we are basically describing how its intensity changes over time by defining four values, that is, Attack, Decay, Sustain and Release. The Attack value is the time period it takes the sound to reach its maximum intensity when played, so if piano notes have low attack time, upon pressing a note, the sould will reach its maximum intensity almost instantly, on the other hand, if piano notes have high attack time, upon pressing a note, the sound intensity starts to increase smoothly till it reaches its maximum intensity after some time defined as the attack value. The same goes for the release time, release time is the time period it takes the sound to vanishes. So if a piano has a low release time, upon releasing the note, the sound vanishes instantly and if it has a high release time, the sound takes sometime to gradually decrease till vanishes. A typical ADSR envelope is shown below: 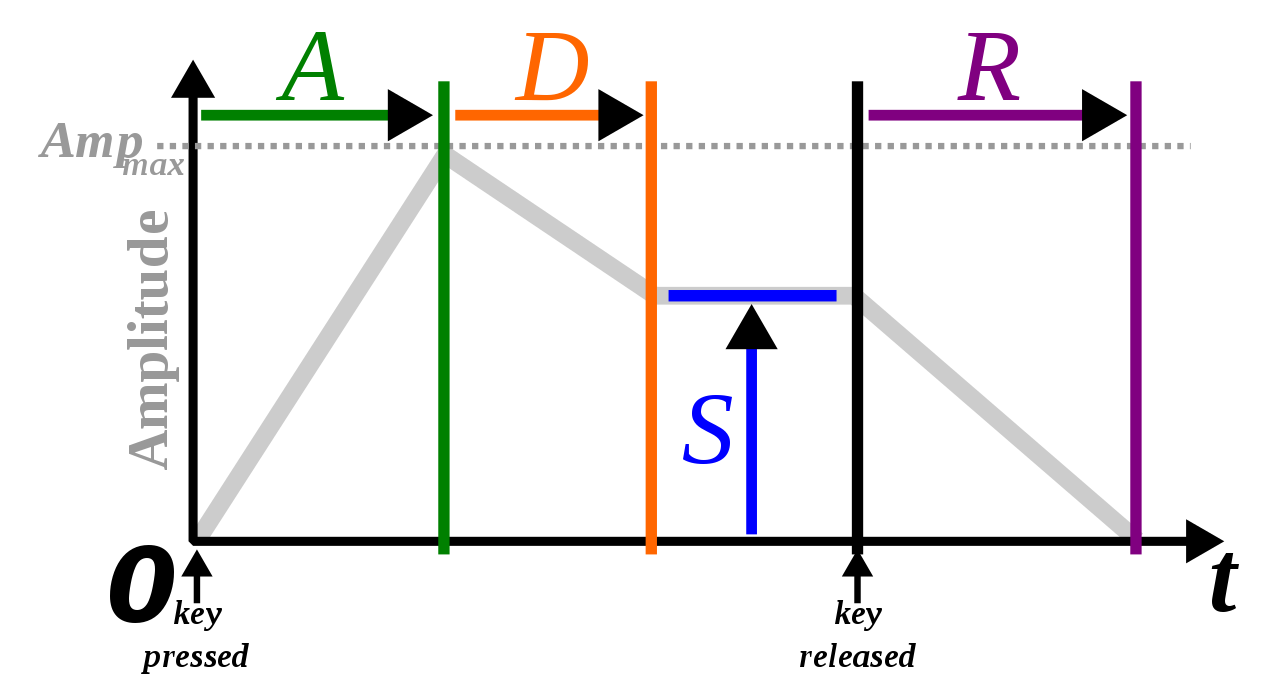 Where A is the attack time and R is the release time. Decay and Sustain are not essential to understand for us. So what does the attack and release values mean for us in Animation Nodes? Well, it means that for low values of attack and release, the intensity changes rapidly and for high values, they are more even and slow. Below, the sound intensity controls the bars height, the right bar has low values while the left one has high value:

So if you want your music visualizer to have rapid changing intensities, choose low values and if you want otherwise, choose high values.

Not the answer you're looking for? Browse other questions tagged baking animation-nodes audio fcurves or ask your own question.

1
Baking Sound to F-Curve with Python on Pre-Existing Objects
3
What's the range of values on a sound-baked f-curve?
5
Is there a way to make baking sound to F-curves more accurate?
4
Sound real-time spectral analysis frequency peaks
0
Splines Animated by Sound - Animation Nodes
1
How to remove sound from sound spectrum in animation nodes?