Can I use the vertices of a mesh as an input for site points of the voronoi cells (voronoi sites) to create a voronoi procedural texture with the Node Editor for the very same mesh?

I need something simpler (no extra features, no real time update necessary), but kinda similar like in this video, between 0:30 and 0:45.
https://youtu.be/Aljbw9PQlck?t=31

EDIT: The video is a bit misleading, cos it shows real time update, thought it would be nice (for easier edit) if possible but it isn't necessary. Main goal is a full control over the position of the cells.

The input mesh is suppose to be kinda a Delaunay-triangulation, except the 'triangulation' part, how the edges connect the vertices is not important only the vertices as site points for cells.

Animation Nodes can be used to dynamically generate voronoi diagrams. Storing the color information of the diagram and accessing it from the render engine is a problem and our options are limited, one option is to use vertex colors, where the quality depends on the number of loops in the target mesh.

First, you should study how vertex colors works in blender and how to assign it using Animation Nodes and Python. For this, you should see my answer here. I will be using the Vertex Sample and Vertex Colors subprograms defined there in my node trees, so make sure you implement them first.

A simple F1 vornoi diagram based on random points can be generated using a KD tree as follows: 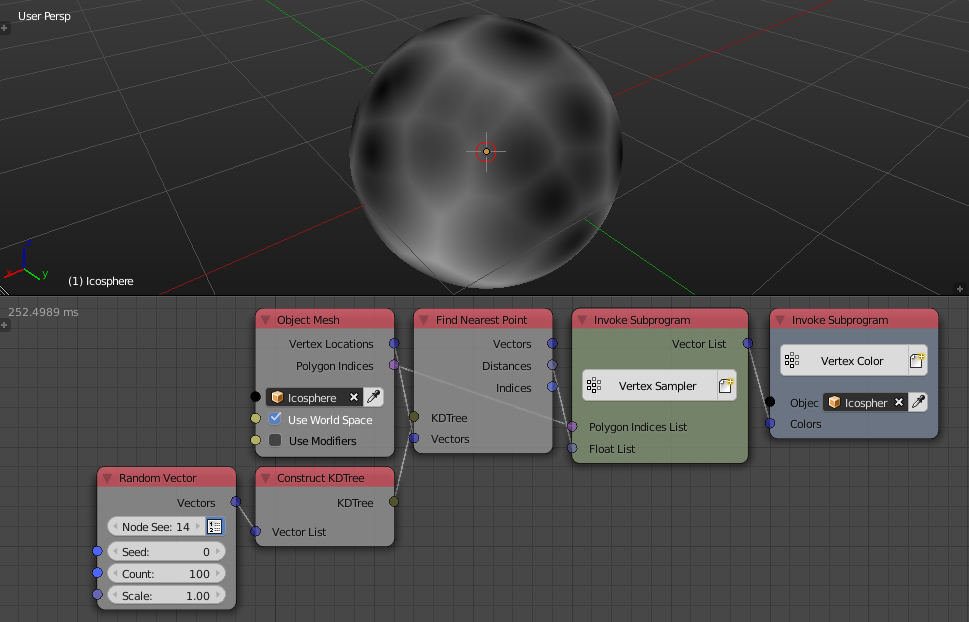 If one wants to use custom points locations, then one should replace the random locations with the custom locations:

If you want to have a solid color for each voronoi cell, then the indices output can be used or a random number based on it:

You might notice that the quality starts to become rather low, and that is the downside of using vertex colors, they are dependent of the loop count.

The other options we have are not any nicer, but they might be suitable for some cased.

What we can do is make a small render engine of our own that renders the vornoi as a fragment shader and use the output in the more advanced render engine. The render engine will cast a number of rays on the mesh defined by a BVH Tree, get the location on the surface point they hit, use it in the KD Tree, and then write the output colors to an image. To write an image given the greyscale value of each pixel, its width, height and name, a script like this can be used:

The ray casting part is simple, align a grid with the camera orientation and location, scale it based on the orthographic scale (3 in my case), we will perform an extra 90 degree rotation around the local z axis because the grid node returns the locations in the vertically first order while blender expects a horizontally first order, the node tree is as follows: 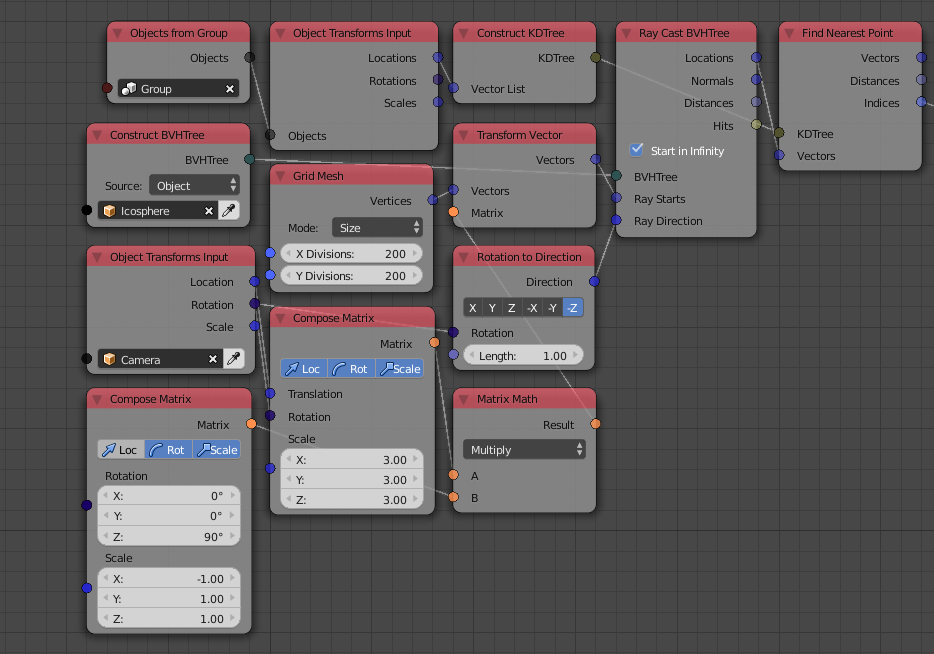 Now, if I used the Windows texture coordinates (Screen Space Coordinates) with a material like this: 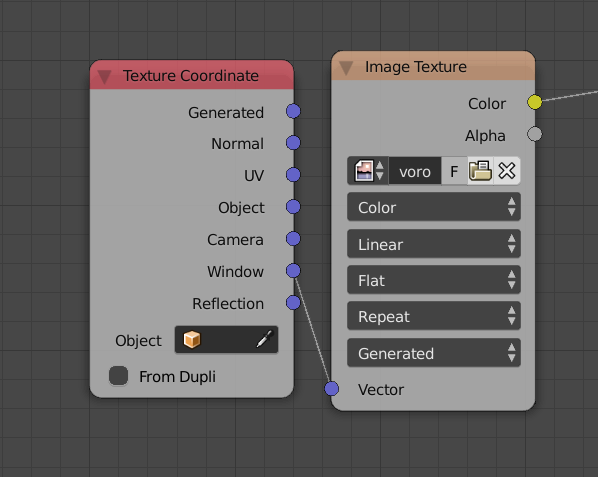 We will get the render projected on our object, which we can then use to do what ever we want:

I created this to work in orthographic view, I will let you create the perspective version on your own.

Other methods include UV space projection, it can be done as following. BVH ray cast is used to get the index of the polygon the ray intersect, we get the barycentric coordinates of the surface point through a barycentric interpolation, we get the UV space locations of the polygon's corresponding UV polygon, perform a convex combination using the barycentric coordinates we computed before, get the pixel nearest to the result of the convex combination or use some kind of interpolation like bilinear or bicubic, write the color to it. The resulted image can be used in the UV objects space as a normal texture. I shall not explain this method, because it doesn't really have any advantages and is hard and slow to implement.

Not the answer you're looking for? Browse other questions tagged texturing procedural or ask your own question.

25
Blurring/Feathering a Procedural Pointiness Mask
3
How can I translate a texture using the mapping node?
9
Project scene to plane in real-time
1
how can I create a procedural circuit board texture
12
procedurally generated mold (fungus) using voronoi texture?
2
Voronoi Texture Node with differing options