How to take a shape or Image Texture and multiply it with random Location, Rotation and Scale along object: 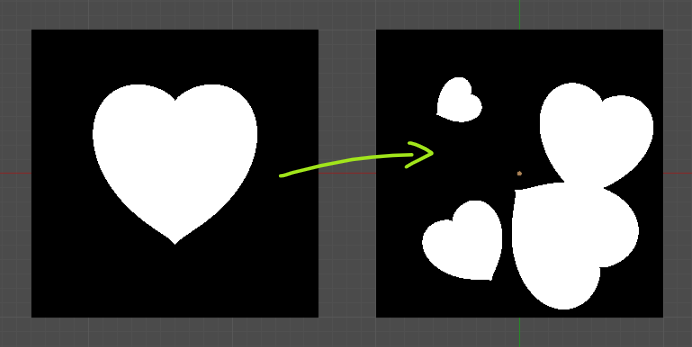 And I want to do something useful with it.

I've tried to find something similar over the web (this is trending right now) and I'm surprised that this question wasn't asked before or I'm looking with wrong terms. I've tried random pattern, duplicating texture, populating image, random tiles, custom tiles and such. There is a lot about tiling textures but each and every Q&A I've stumbled upon are about non overlapping ones. For example:

The only way I can think of this is to duplicate shape as a group and manually change values in Mapping Nodes:

I've tried messing with Modulo, mixing Noise between vectors, using custom node groups for LocRotScale (thanks Gandalf) but results was none, thus nothing even to show.

I want to populate this shape (or any other) along the object with random Location, Rotation and Scale - with control over its number/density and maybe variation strength.

Edit: I'm not looking for alternative methods of creating this setup such as Particles, Image Textures generated in 3rd party software, OSL shaders (CPU only) and such. My intention is to use this in procedural texture generation in Cycles with GPU support.

Nothing really needed for this question but here - have this heart from me :)

The solution I am proposing is very similar to that proposed by Rich Sedman. But it is more automated and I believe gives more natural results. The final result is:

The main idea is to compute multiple layers of scattered non-intersecting objects and then combine them at the end using some methods that we shall discuss forming a random intersecting scattered objects.

I would like you to study this article first as we will be using concepts discussed in it: Introduction To Texture Mapping

First, we use modulo to create a grid sub-coordinates plane, if you use the output as the coordinates for some image texture or a procedural texture, you will see the shape repeated on the grid: 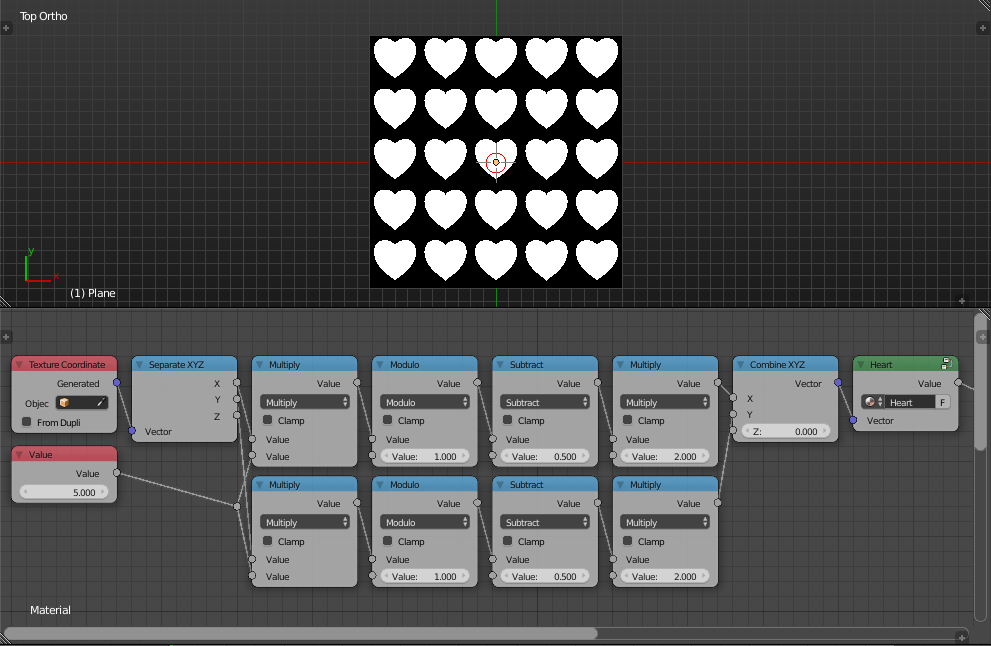 By flooring the result of the multiplication of the coordinates with the value, and evaluating noise at the output, we get constant random value for each cell. Floor is performed by rounding after subtracting $0.5$. 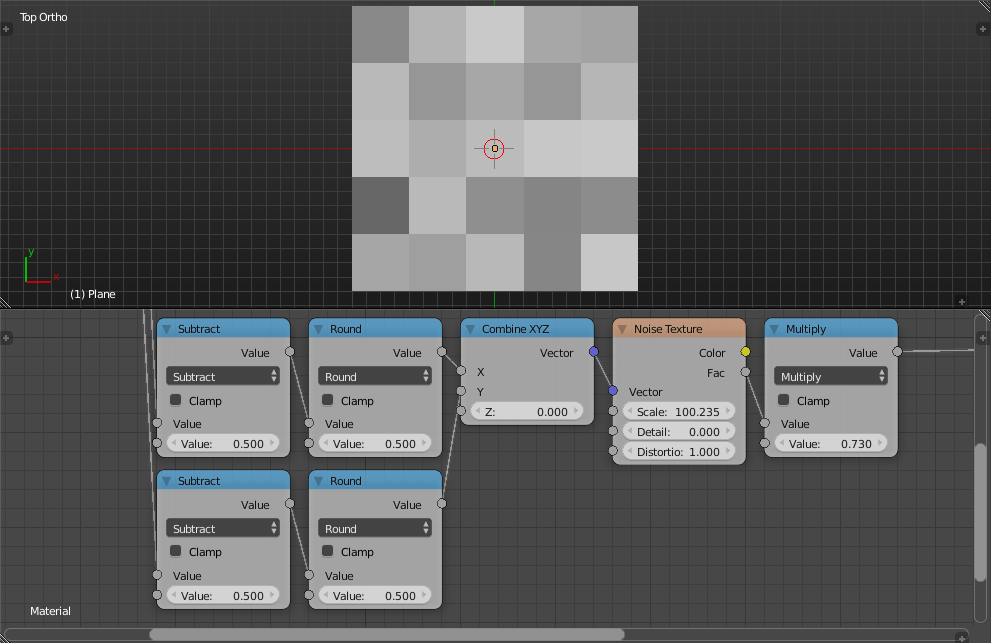 Assuming the absolute of the bounding locations of the computed shape will never exceed one in all axis, we can scale the sub-coordinates by dividing them by the random values we computed. The random values has to be between zero and one so as not to get too big and become out of the bound of its cell. 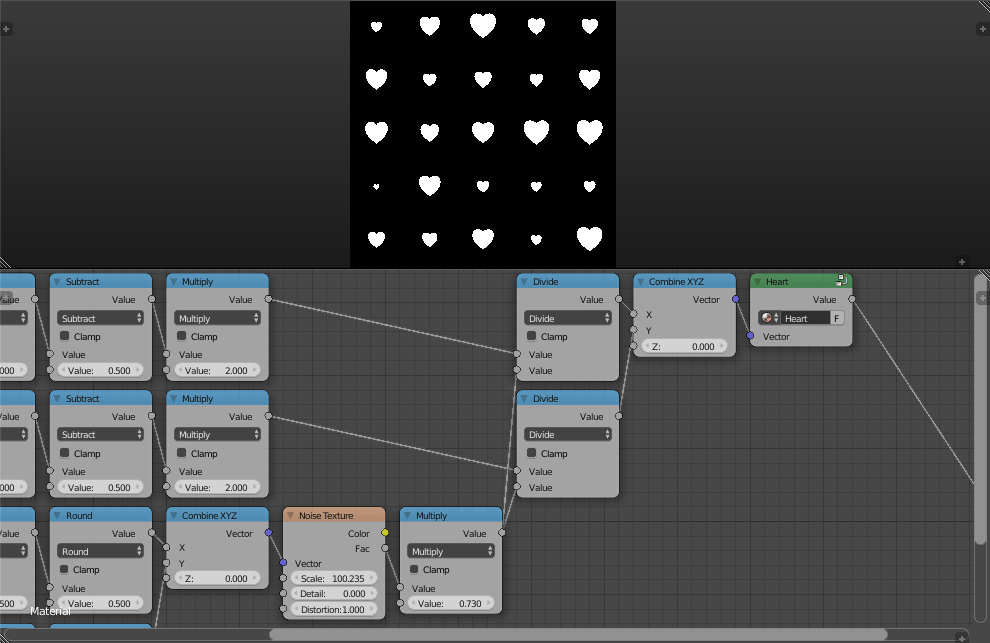 We now move each of the sub-coordinates by some random amount putting in consideration not to move it too far so as to keep it in bound. Since we know the maximum scale of each shape (The random values used for scale), we know our translation limits, smaller shapes have more freedom while bigger shapes don't, the limiting equation can be derived by looking at this illustration: 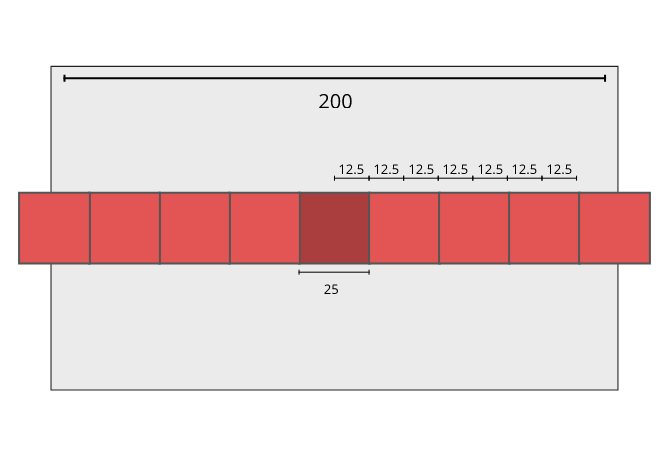 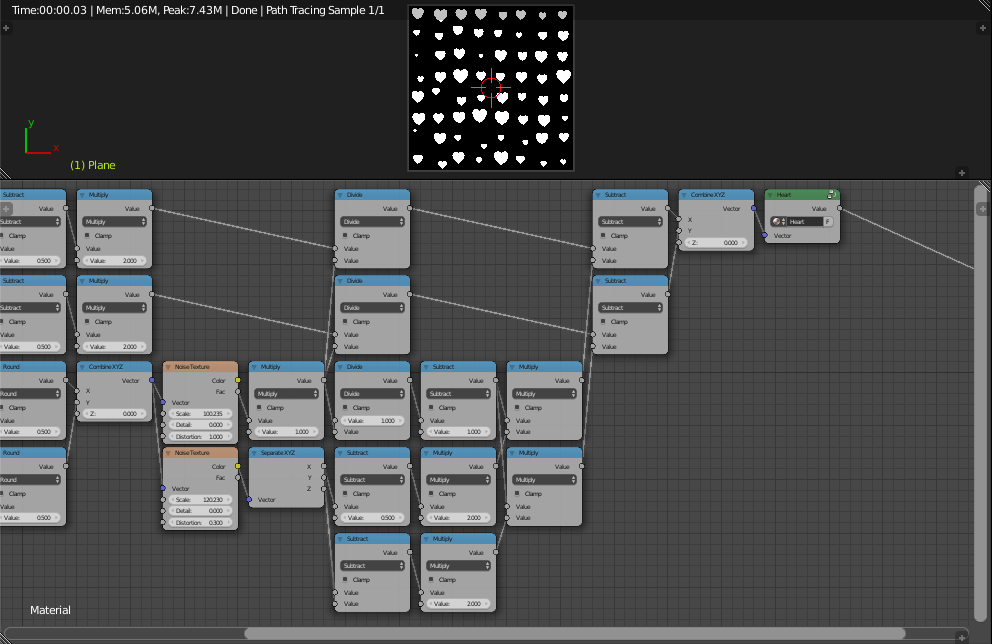 Then we perform random rotation, using yet another noise output multiplied by $2\pi$ used as the angle of rotation, you already know how to perform the rotation, so I shall not show it here: 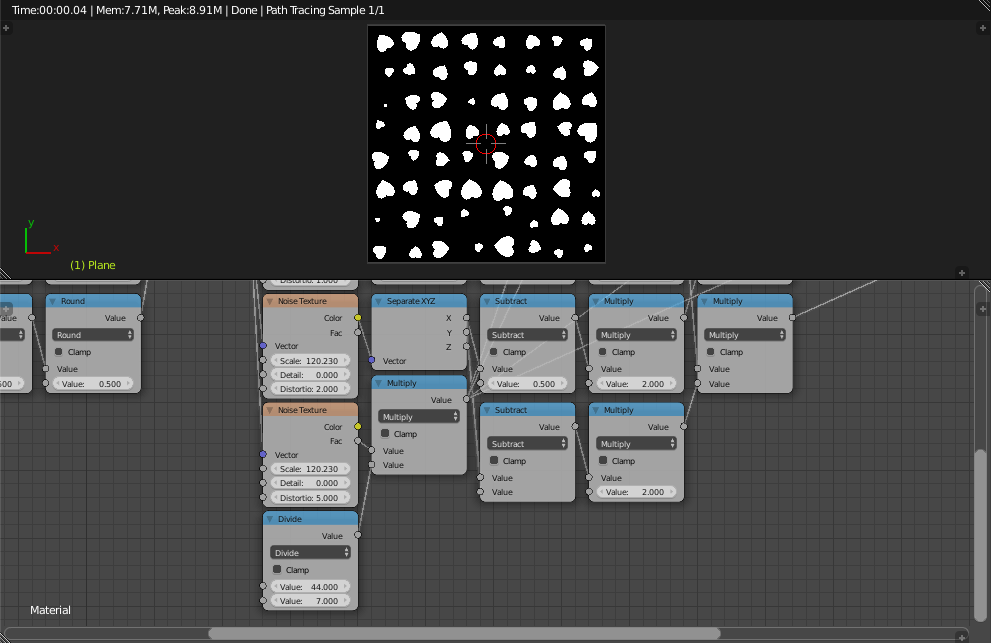 Even though we randomized every transformation, it still doesn't look very random, to make it more natural, what I am going to do is remove some of the shapes if some noise value is less than some value: 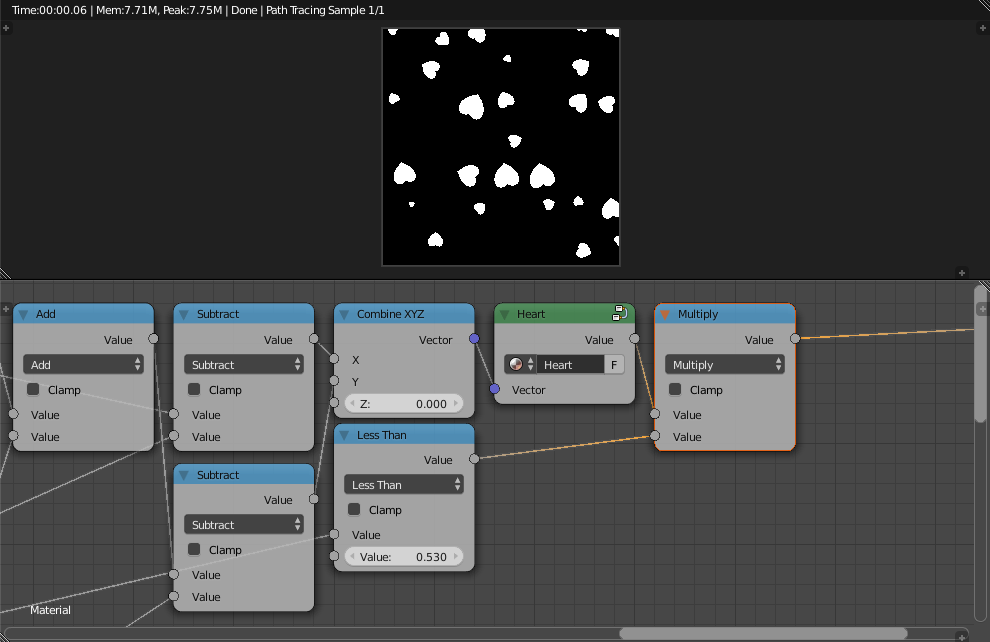 And I am going to group what we just did, where the seed is the distortion of the noises: 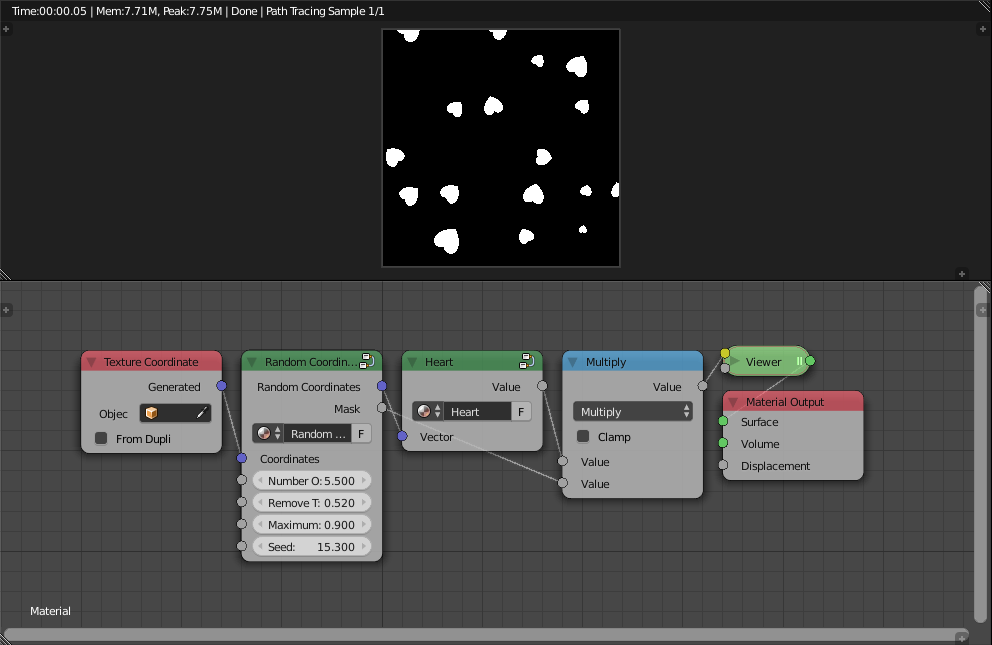 Now is the time to create multiple layers of this and combine them, but before doing that, lets assign some colors to the shapes to see them better using one of the noise outputs as the color channel: 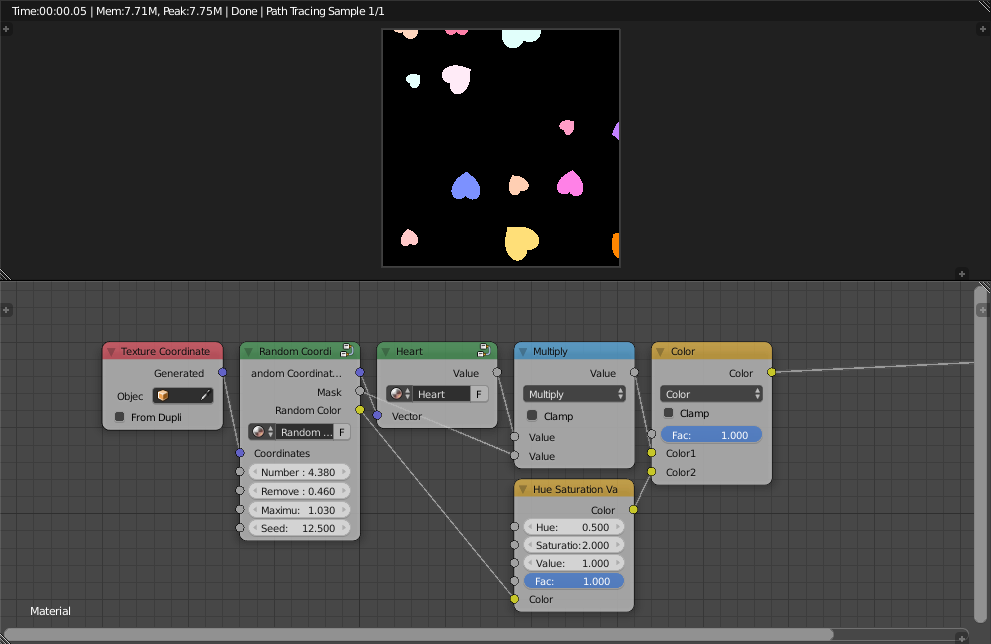 To create the layers, we are going to use a loop, the loop structure is provided by the ShaderNodesExtra Addon:

In the loop, we offset the coordinates plane by some random amount, mix the old color with the new one and reassign, very simple. This gives us the result:

There are a number of challenges to produce such a pattern - in particular manipulating the 'seed' pattern to rotate and scale it along with being able to clone it and produce many overlapping copies. 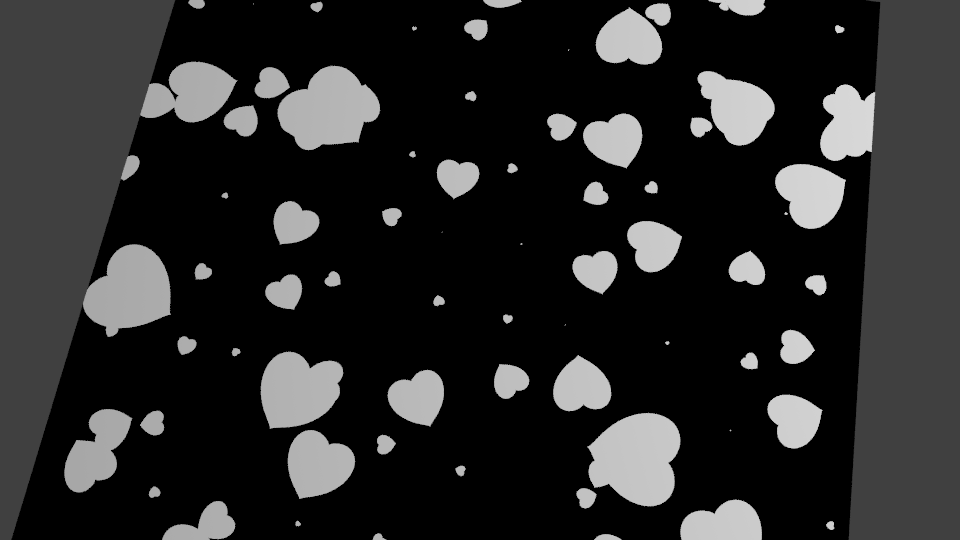 Starting with a 'heart' node group we can generate a single instance of the pattern :

The heart will be centred around (0,0) so using Object coordinates will position it at the origin of the object. This is important since it is the origin that will be used for any rotation and scaling.

Rotation can be achieve with the following node group :

This applies the rotation using SIN and COS functions as :

Note that the input Rotation is multiplied by $2*pi$ so that 0.0 to 1.0 relates to a full rotation.

Similarly, scaling can be produced by a Scale node group :

In order to get multiple hearts we need to arrange the input coordinates so that we can generate multiple 'origins' - with each 'heart' centred on an 'origin' where the coordinates are (0,0). We can achieve this using the Modulo function. The Modulo takes one input value and divides it by the other, outputting the remainder. In this way as the input increases the output will also increase but once it reaches the divisor value will jump back down to zero and begin again. By using the Modulo function on both the X and the Y coordinates we can break the texture space into a number of cells - similar to that described here https://blender.stackexchange.com/a/26703/29586. 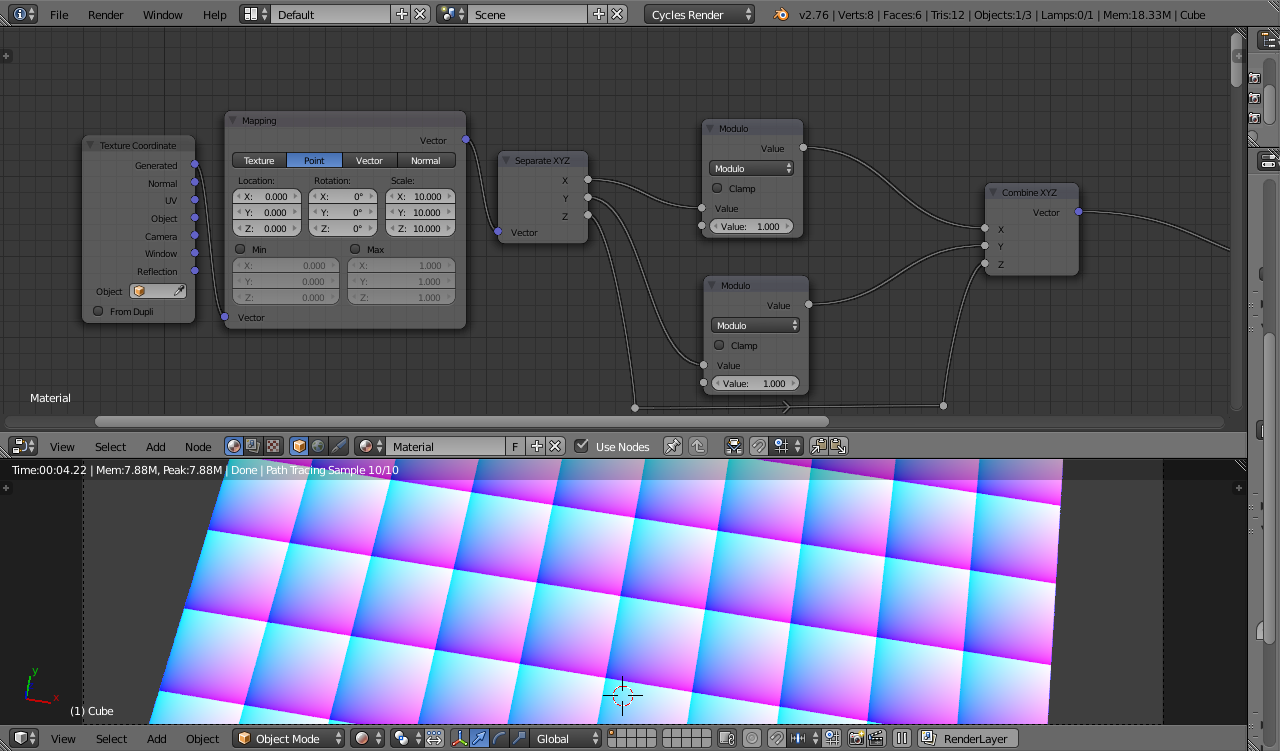 Note how the Modulo result produces repeating coordinates - useful for our multiple origins. By subtracting the Modulo from the orignal vector we can create an output that is constant over each cell - we can use this to generate a random value for rotation/scale per cell. 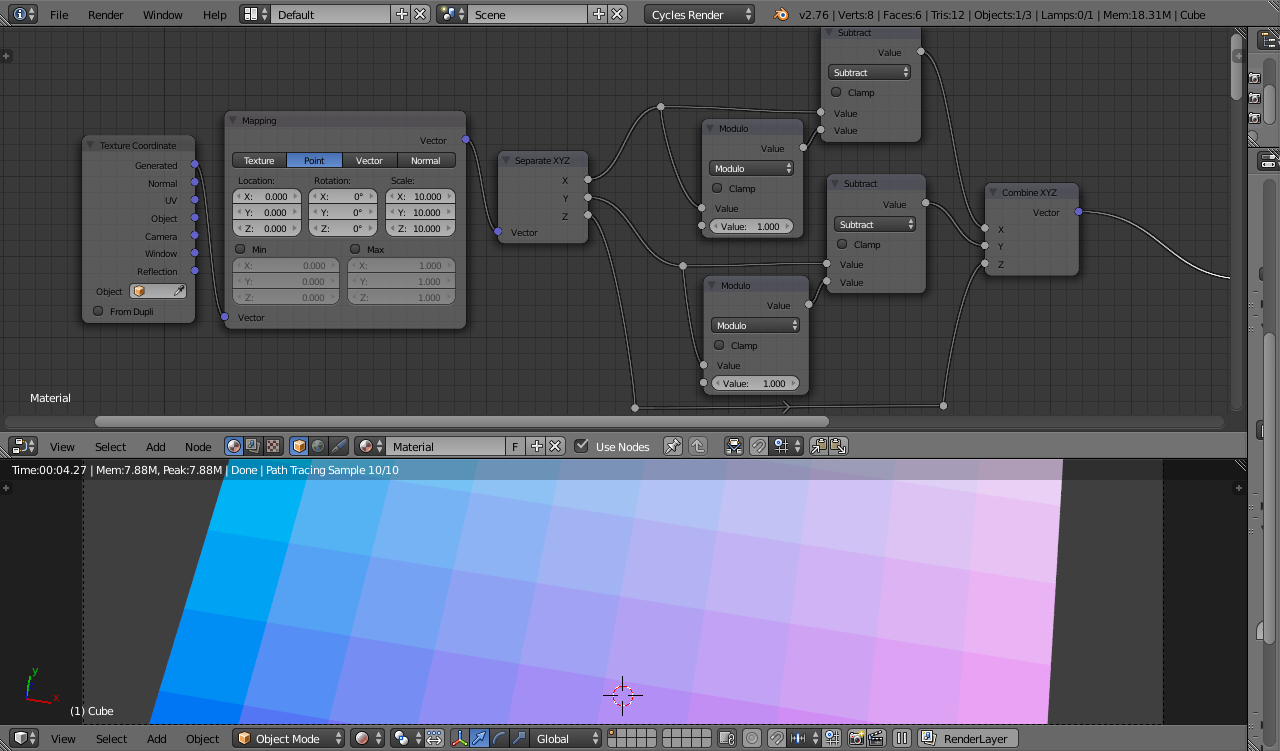 Using these manipulated coordinates we can create multiple hearts - one per cell : 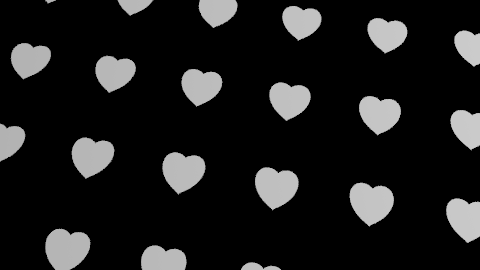 Using Noise textures we can generate a displacement, rotation, and scale for each instance of the heart. 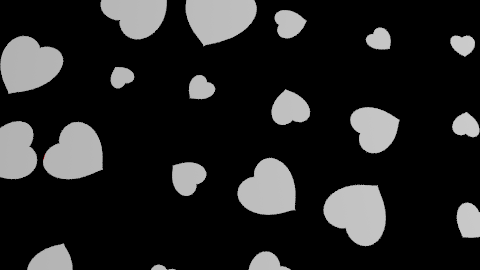 Note, however, that each heart is bound by the walls of its cell - try and move them outside this region and it will be clipped. This means that the generated hearts can never actually overlap. 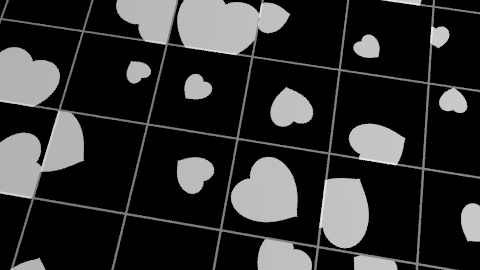 One way to address this is for each cell to also render the hearts from its immediate neighbours. This will allow elements to overlap to the extent of one whole cell. Keeping the displacement low enough to ensure that no heart extends beyond its neighbours' boundaries will avoid clipping at those further boundaries.

To demonstrate, see the following image : 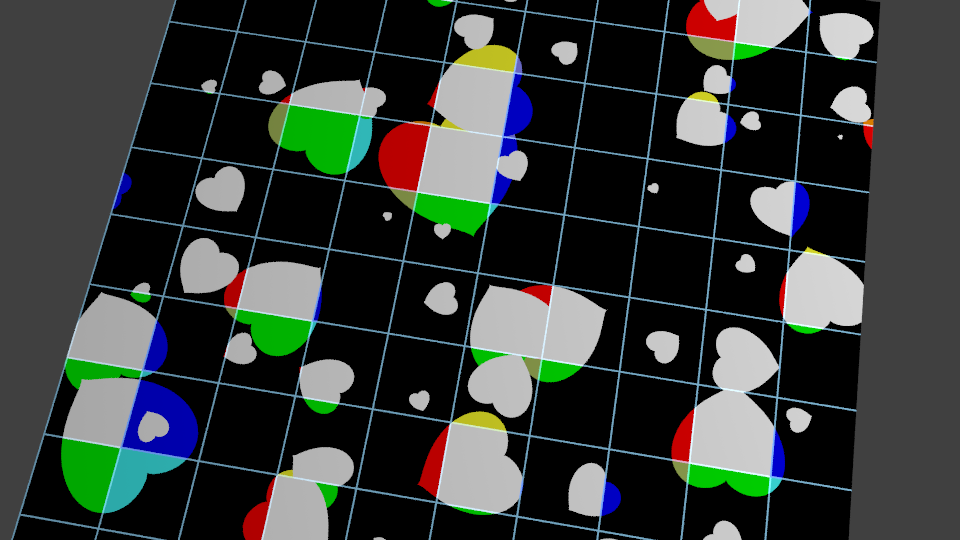 In the above image the cell edges have been shown and the hearts coloured based on which 'cell' it is acually originating from - with white representing it being within the boundary of its own cell, blue shows where it is the heart from the cell to the 'west', red the heart from the 'east', yellow and green from the south and north respectively, cyan, brown, orance, light-blue for the corners. 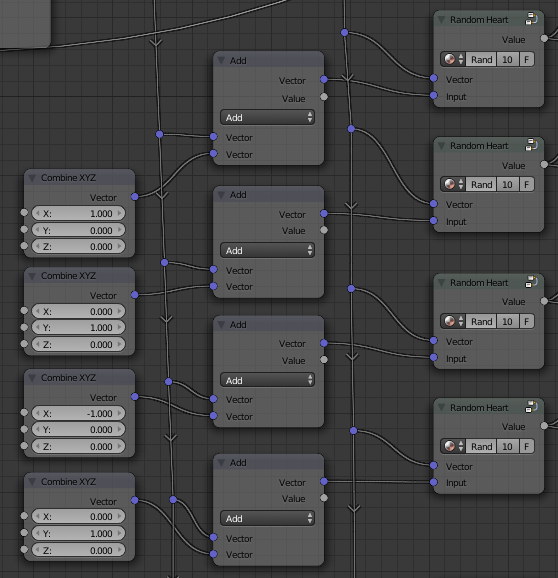 The outputs from each of these groups are combined (using simple Maximum maths nodes) to produce the final output.

To extend this to images, all that is required is to replace the 'heart' node with the image (adjusted to set the origin to the centre) and change the method of combining the images to take account of the color channels.

The above may seem overly complicated but it does convey a significant advantage - the rendering of each 'cell' can take account of the position, location and scale of all surrounding cells. This allows for some interesting effects such as custom Voronoi, blending between objects, controlling how they overlap, etc. - either those 'bigger' ones always on top, for example, or scales (fish scales, dragon scales, etc.) could be randomly displaced and overlapped, but those further 'up' the texture always overlaying those 'below' - but that's outside the scope of this answer. 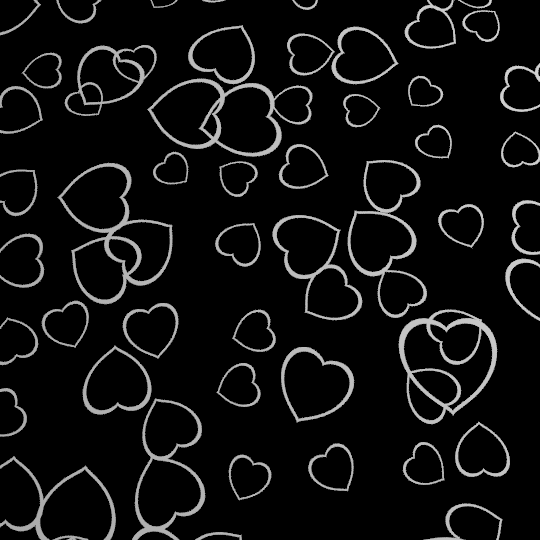 Did you consider using particles? I.e. use the plane with the heart as object in a particle system? That might give you the randomeness you need. It doesn't give you multiple hearts in one material, but the effect on the rendered image is similar/the same.

Plane with image as particle

Here's an example where I "alpha'd" the black parts

2
How to show out of bounds texture from a modulo operation
0
procedural texture driven by image texture? Possible?
59
How do I create repeating patterns with cycles' procedural textures
11
Simple parquetry tiling
16
Star Trek: Impulse Engine Material in Blender
10
Procedural polka dot pattern with cycles
7
Repeat a generated texture in Cycles?
11
How can I create a staggered, repeating procedural pattern?
4
Pointers to node groups?
3
What are the valid types for the type parameter in bpy.context.scene.node_tree.nodes.new(type)?
See more linked questions