Create one curve object per spline in Animation Nodes?

I am trying to create a scene where a list of spheres are positioned onto the verts of a hidden icosphere, and as I move an empty through the icosphere, the visibility of the balls is toggled, and then as each sphere is revealed, splines will grow out to join them (probably using the Bevel End value), following the edges of the icosphere.

I've solved the problem of revealing the spheres as I move the empty, but I'm stuck on the splines part.

What I want to have is each of the splines grow as their respective spheres are revealed. I know I could instance a bunch of curve objects, equal to the number of edges. In this case, though, all their origin points would be at the same place (0,0,0), and so an effector object wouldn't help, nor would I have the curve objects in any sort of spatial order with which I could use a falloff profile on their individual bevel ends.

I've seen that I can individually effect the splines of a single curve object, as shown below, but I haven't been able to figure out how to do that based on proximity to something else, or even in any particular order. 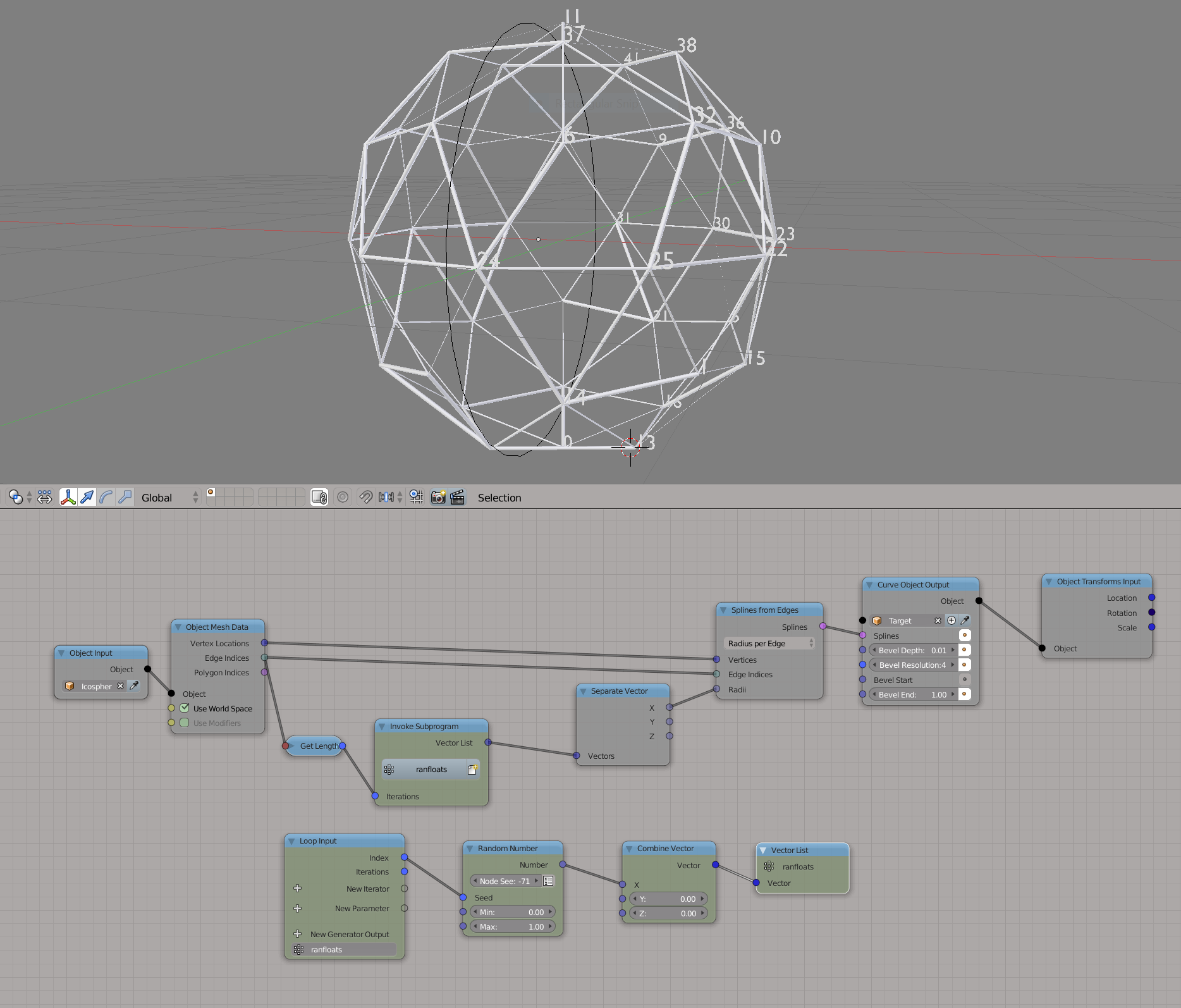 Have I made sense here?

Animation Nodes have a node called Trim Spline Node which can be used to dynamically trim splines. There are certain complications, however, if one decided to use this node:

Thus we are forced to to use a more advanced approach, but no worries, it is just as easy.

First, we loop over edges, get the vertices locations at the indices of the edge indices, sort the vertices in the direction of the animation, I can see that your animation is from the left to right, so we check if the $x$ location of the first vertex is larger than that of the second, if it is, we reverse the list such that the first vertex becomes the one that is closest to the initial location of the animated effector, then we create a spline from those vertices. 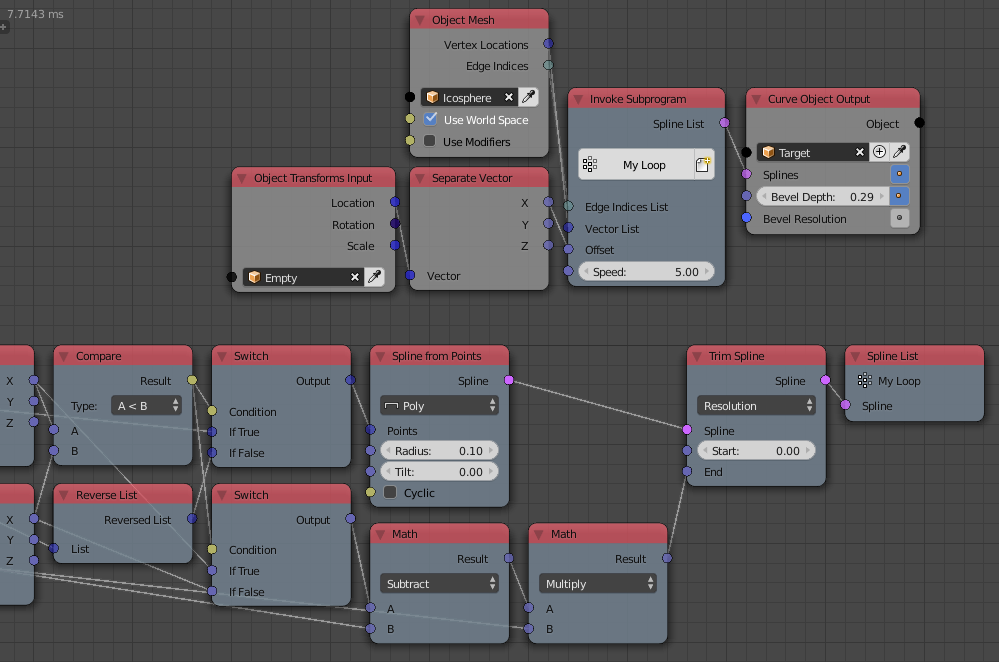 Notice that the trim node shouldn't be used here, because the spline is just a line so a linear combination between both vertices of the line would yield the same effect, but I just wanted to show you how trim node can be used.

I've accepted the answer from @Omar Ahmad, but I also wanted to show the solution I came up with.

Rather than using the trim spline node, I instanced a bunch of curve objects, and fed each single edge into each of them, and then set their bevel end value based on the distance from the effector object. Here's an animated gif and a hi-res screenshot showing my node setup 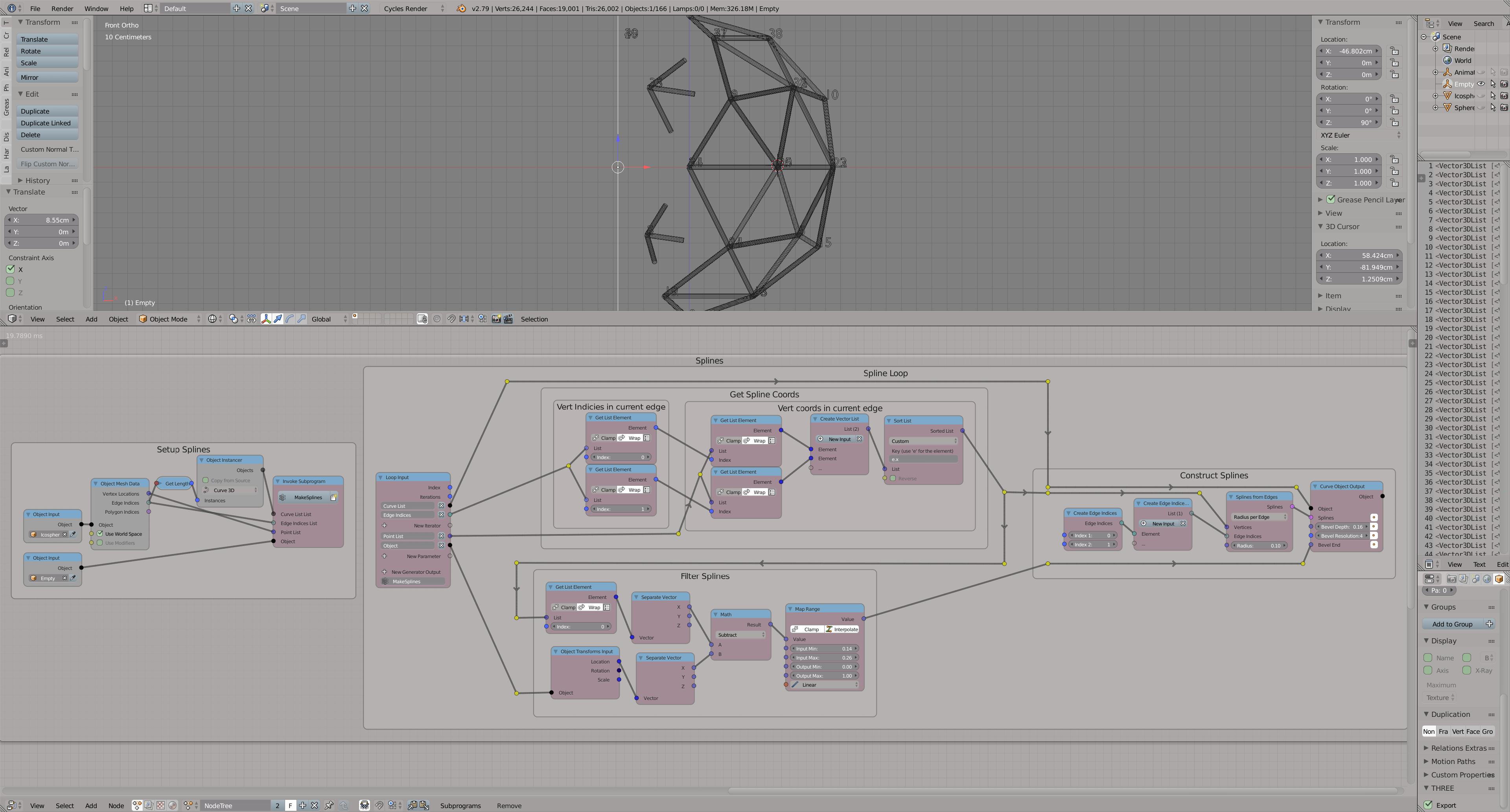 Not the answer you're looking for? Browse other questions tagged bezier-curves animation-nodes splines or ask your own question.