Im trying to create a volumetric material that uses a 3d texture. I need this volumetric to be animated along a curve. Right now, I have the material using generated coordinates. But the 3d texture does not bend with the object. Is there a way I can have a 3d coordinate space that is calculated before the bend of the object? Or perhaps a way to bend my coordinates to match the geometry?

-Create a cylinder with multiple divisions down its length.

-Rotate the cylinder 90* on the Y axis

-Create a colour ramp to clamp the texture values

-plug the shader into the volumetric output

-notice how the texture does not curve with the geometry

It can be done!

Approaching it on a Surface

Before we try to do this with a 3-dimensional texture, let's attempt it in 2-dimensions. This is actually fairly straightforward. We can create a proxy mesh by duplicating our object (Shift + D), removing the modifiers from our duplicated object, then setting the Texture Mesh setting for our original object to the mesh of the second object: 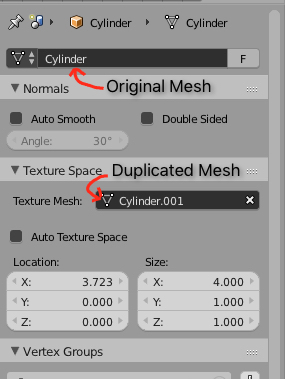 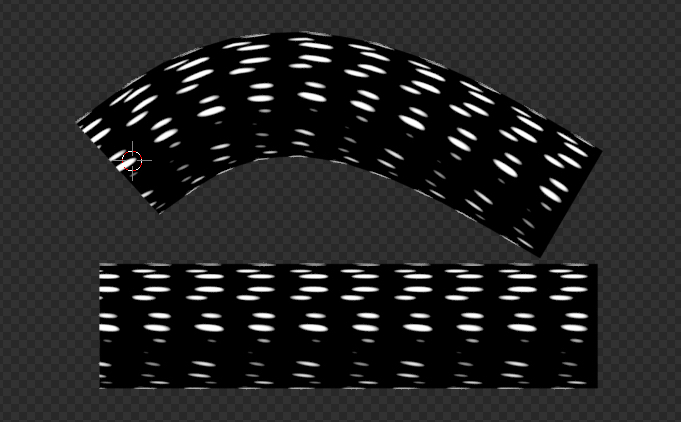 Hey, that works perfectly! Unfortunately, it doesn't work for 3D textures. When we attempt this with a volumetric texture it does absolutely nothing.

Approaching it in a Volume

The best way to do this in a volume (believe me, I've tested others) is to create a proxy mesh, then take the coordinates from the proxy mesh.

Unfortunately, Blender does not provide an easy way to transfer volumetric data on and off of meshes. Our saving grace is the Point Density node in Cycles. The Point Density node will create a volumetric texture based off of the vertices of any mesh, and interpolate between them. It follows, then, that our coordinate proxy mesh should be a 3D grid of points.

We'll start by adding a plane, then in Edit Mode, moving and scaling it so it has the same size and location of the bottom of the cylinder's bounding box (in the image, I enabled the bounding box display): 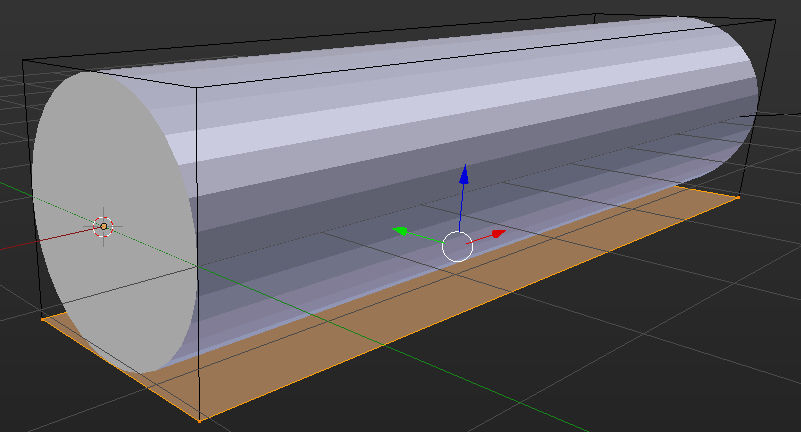 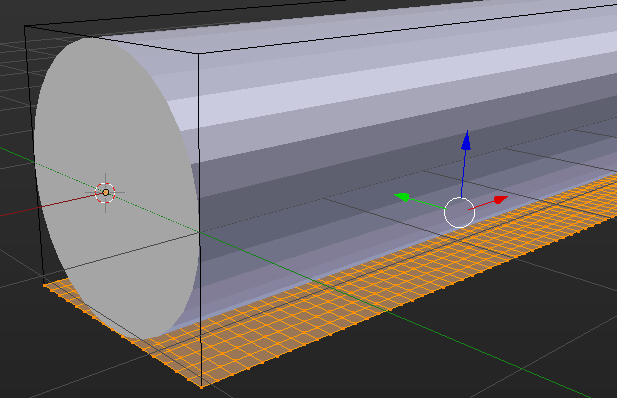 Next, in Object Mode add an Array modifier. Use Constant Offset in the $Z$ direction to create a "stack" of planes (I used an offset of $0.125$). Add enough planes to fill the bounding box of the cylinder: 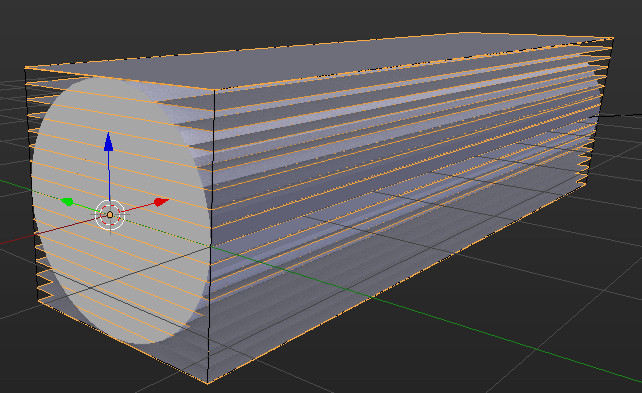 Apply the Array modifier and add a Curve modifier. Set up the Curve modifier the same way that it is set up on the cylinder. Check to make sure everything deforms properly (proxy mesh set to Wireframe display):

The Point Density node can only take color from Vertex Colors, Weights, and Normals. By far the most customizable of these options is Vertex Colors. We need to find a way to put Texture Coordinates into Vertex Colors.

Let's use Animation Nodes! After downloading and installing the add-on, go into the Node Editor and add a new NodeTree.

Before we start adding nodes, we need to figure out how to emulate Generated texture coordinates. According to the Blender Manual:

Generated
Automatically-generated texture coordinates from the vertex positions of the mesh without deformation, keeping them sticking to the surface under animation. Range from 0.0 to 1. 0 over the bounding box of the undeformed mesh.

Let's get our inputs first. Add the following nodes (press Shift + A to bring up the list of nodes or Ctrl + A to search): 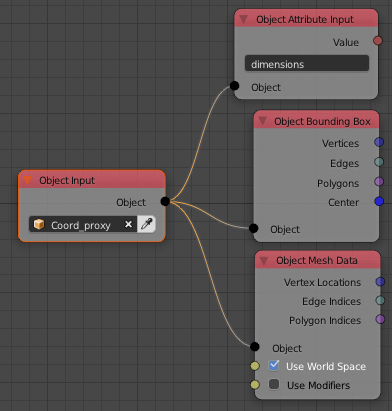 The object in the Object Input node is our coordinate proxy object. The text in the Object Attribute node is dimensions. Note that "Use Modifiers" is unchecked. This ensures that the coordinates we get don't include the Curve modifier. Next, we'll use Vector Math nodes to implement the above formula:

To utilize this, create a loop subprogram by adding a Loop Input node. Create this loop:

The numbers are truncated in the screenshot. Here they are, row by row:

Now, add 3 Invoke Subprogram nodes with Separate and Combine Vector nodes to encode the $R$, $G$, and $B$ channels. 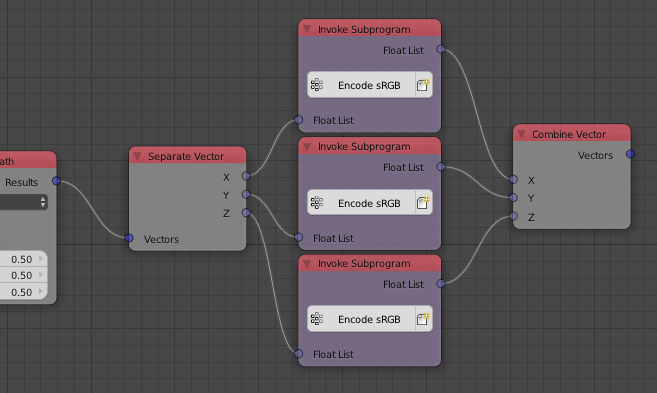 Then, create this script (make sure to name things properly): 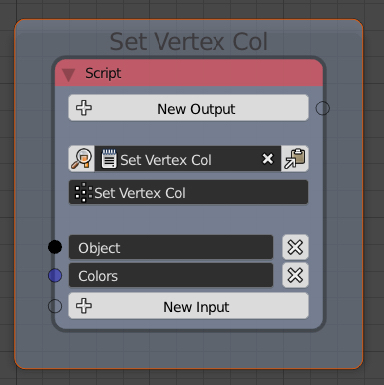 Here is the script:

Finally, link up the last nodes (for an explanation of how they work, see the answer linked above). Here's the final tree:

Getting the coordinate system into Cycles 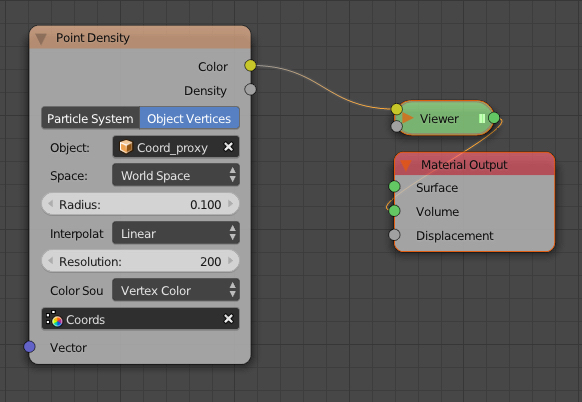 Activate Rendered View in the viewport (Shift + Z). Position the 3D View so that you are looking at one of the "caps" of the cylinder. Adjust the Radius parameter of the Point Density node to be just big enough that there are no "gaps" ($0.1$ worked for me):

Now we have our coordinates! Use the Color output just like you would normal texture coordinates, and volumetric texture-ize away! 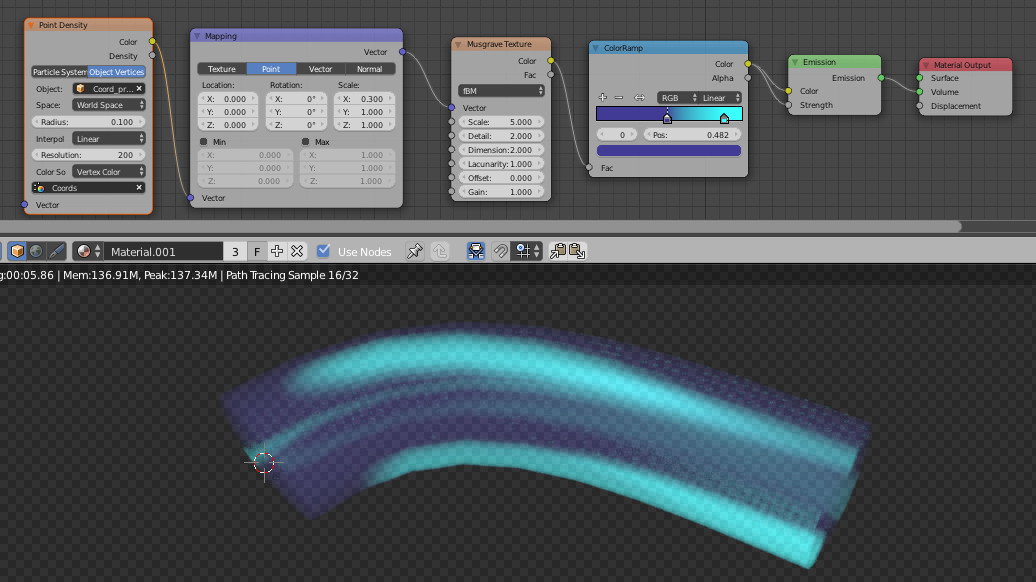 Just remember that anything you do to animate the cylinder also needs to be done to the proxy.

Not the answer you're looking for? Browse other questions tagged cycles-render-engine volumetrics coordinates texture-coordinates or ask your own question.

3
How to align a volumetric texture along curve?
4
Acces unmodified Normals on object with Custom/Transferred normals

5
Using 2D / 3D textures with volumetrics?
4
Apply a volumetric texture tangentially on a torus
7
Is the w-coordinate of the UV coordinate system supported by Volumetric materials?