How to snap an object to another object's edge

How to snap an object to another object's edge.

I'm trying to find a more accurate way to place this object so that the edges are touching. I want to do this so that in my next step I can perform a boolean operation more smoothly.

I'm trying to get it to snap to the place where I'm circling it with the mouse.

I've tried googling and searching this site as well as the blender manual.

Any help would be appreciated. I'm really new to blender and trying to learn a good workflow. 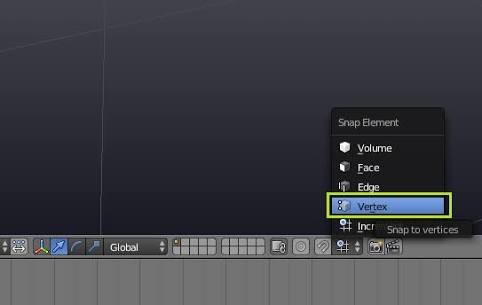 Change the snapping mode in the snap tab in the 3d view header to Vertex and drag according on your specific axis until a small ring appears on the vertex you want to snap to when you hover the mouse over it.

When you use snap to edge the mouse has to actually touch what you want to snap to.

Add a vertex to both the anvil's and cylinder's edge. Line them up at same height by eye Snap vertex to vertex. Remove extra vertices.

(Probably not the ideal solution.)

I still think Blender needs some work in the snapping department. As you can see in @LateralTerminal's answer, Blender chooses which part of that oval should snap to the anvil. I think a better option would be to select "snapping" vertices in object 1 and 2 (outside of edit mode): the vertex to snap from then the vertex to snap to.

There's a nice feature in Fusion 360 called "Move - point to point": You select the start point then an end point - the two object snap together at exactly those two points.

I just don't get why Blender would make the decision about which part of the first object should do the snapping. I'm currently dealing with an object that snaps away from the target object when I hover the mouse over the target object.

Not the answer you're looking for? Browse other questions tagged objects transforms snapping or ask your own question.

10
How do I snap a vertex along a local axis?
0
Rotating Face Won't Stop Shaking
0
Position an object's origin point to the face below (python)?
2
Snap object to the center of another object face
0
How to snap to a face with axis constraints?
6
Align Object to Face & then Center to that Face
1
How can I force mesh to remesh along a polyline?
1
Can I reset the origins and parents of a object to normal X Y Z