What I wanted to do in short: I have a metal, cone-like object that I want to rebuild in blender. In reality, the object has some letters press stamped into it (so it looks like an engraved font).

Here is how I did it:

1) I created the cone, used Ctrl + R to loop cut the mesh, parted the new line of vertecies and made them into a curve. Then I used the curve modifier on the text to shape it around the cone. 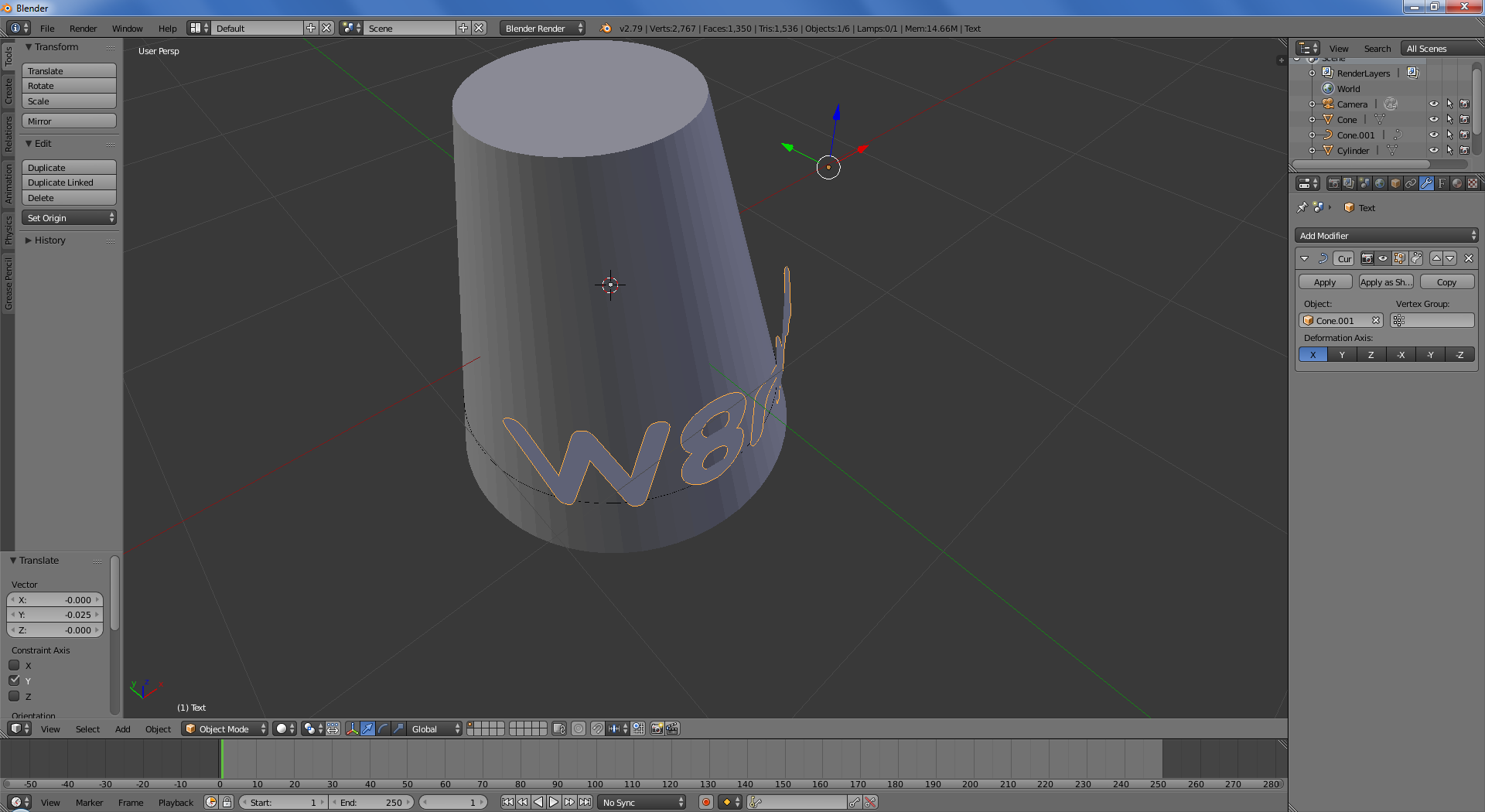 2) Then I used the shrinkwrap modifier to project the text onto the cone. Here you can see that you need a high resoluted cone (aka more segments to the circle) to look good. Otherwise you will get these jaggeded outline. 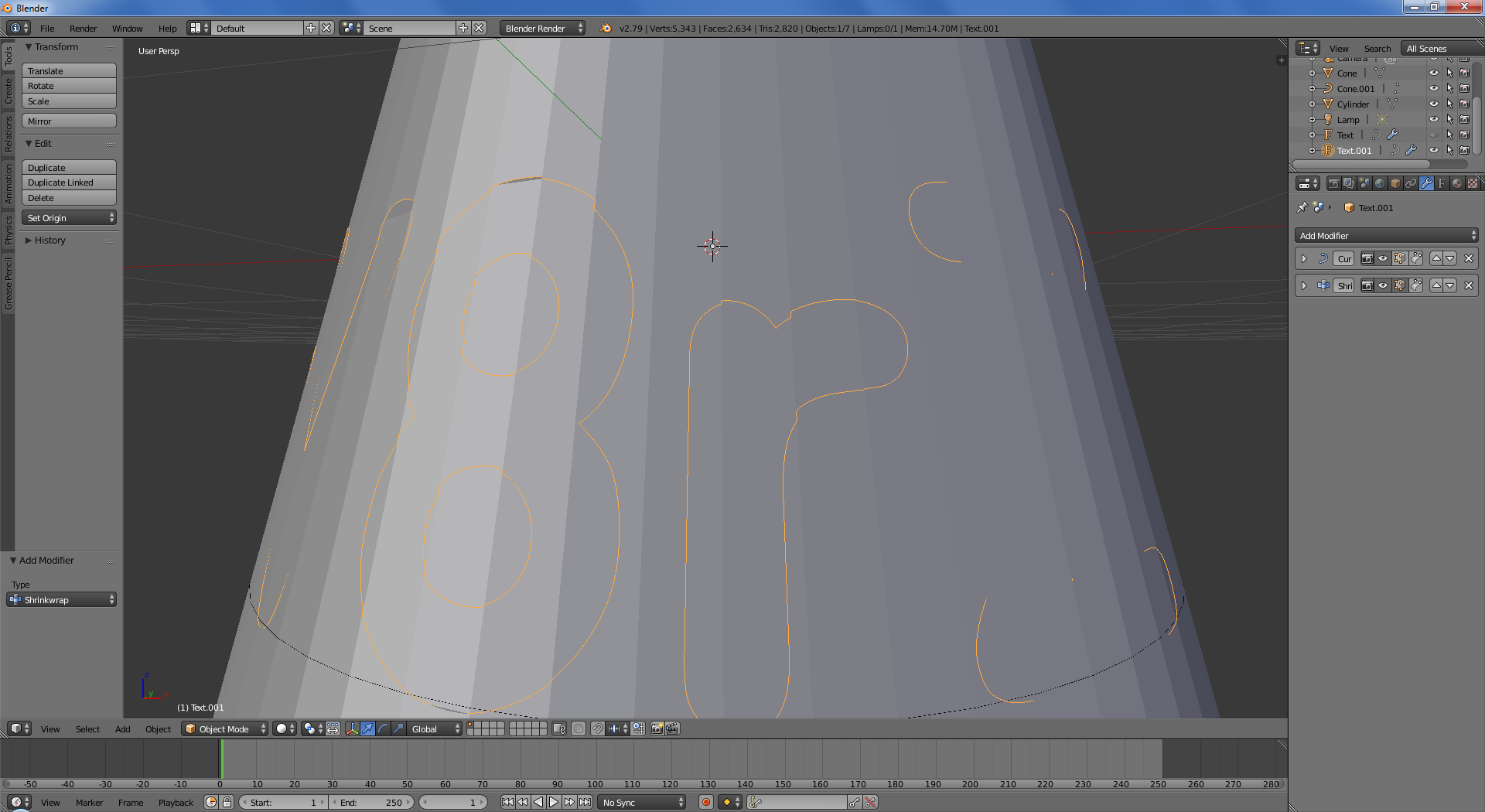 3) Because an extruded text object (using Text Tab -> / Geometry -> < Extrude>) is not something that the boolean modifier can work with I need to turn the text object into a mesh using Alt + C. Now I have text as a mesh that was shrinkwraped to the cone (Yes, I also could do it like this: curve -> extrude -> mesh -> boolean. So flipp when the text becomes a mesh. That way you don't get these jaggeded outlines, but I remember that there was something else to it so that I wasn't able to use this route || EDIT: Now I remember: The shrinkwrap part didn't work out for text on a cone (but does on a cylinder)). After I upscaled the text just a tiny bit to be bigger than the cone, I'm ready to use the boolean tool. 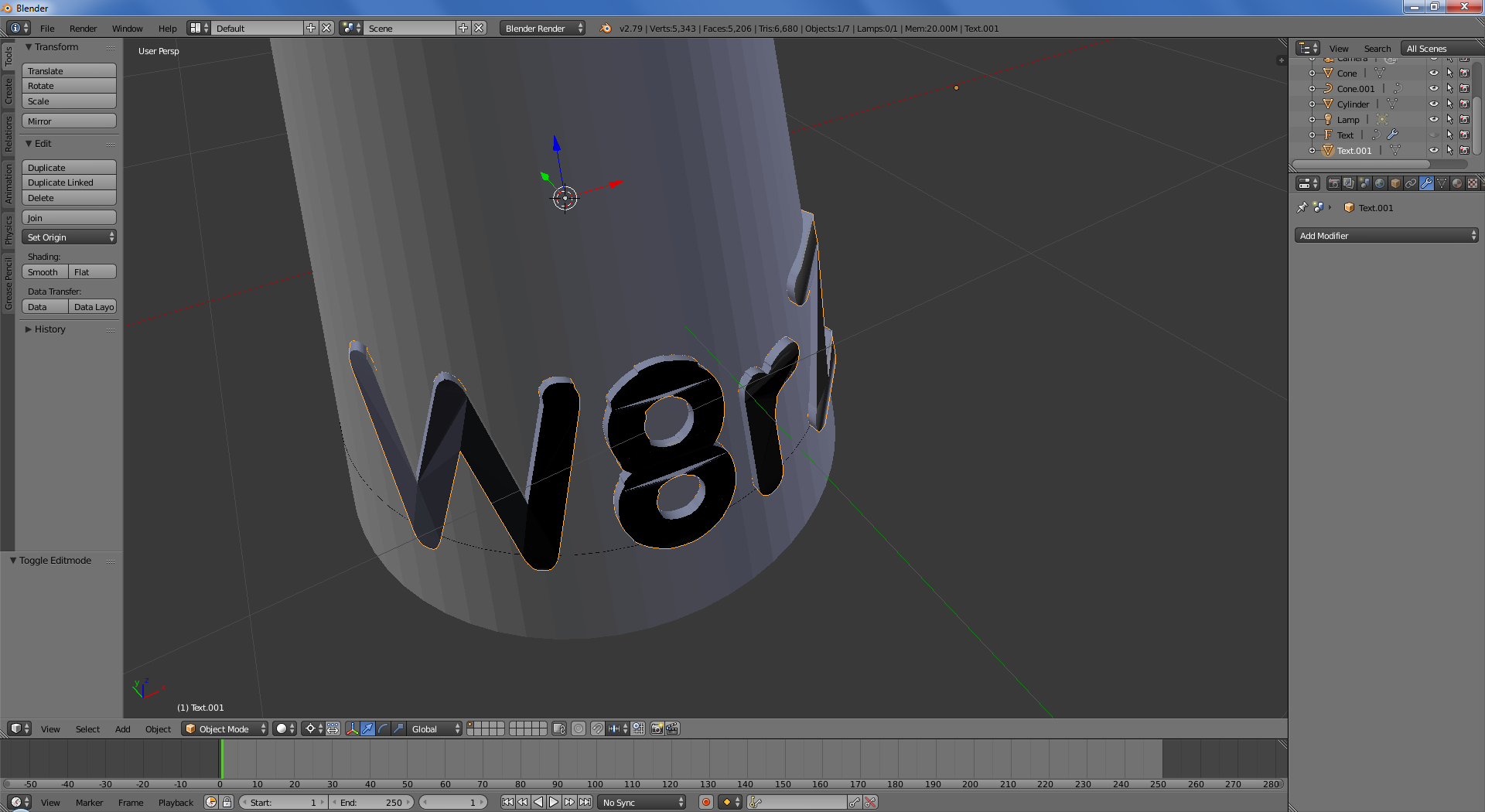 4) After I set the boolean modifier you can see not only that the text outline is horribly ugly (which can be dealt with) but also that (because the text was turned into a mesh) it has like a million faces that were also carved into the cone. As you can see in the image, it exists in the "W" as well as in the "8" and the "r". 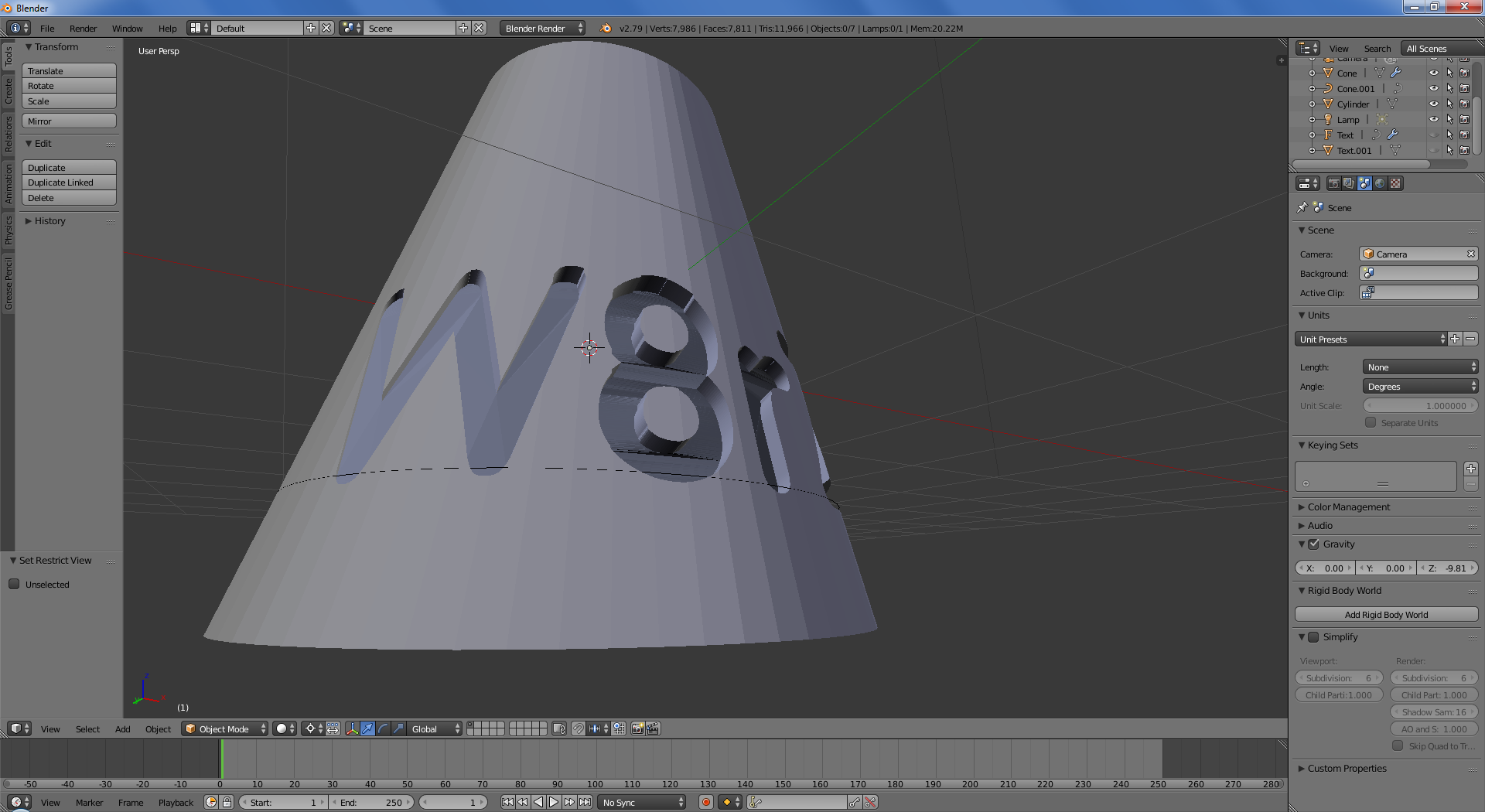 5) Now to the problem I have no idea how to solve:

This now is the set I'm going to render. The problem I get when I render this cone is that I get lines in some parts of the carved out text. The "W" is fine, but for the "8" and the "r" blender seems to just trying to break it up with some simple horizontal lines.

I have tried many things like flipping the normals, combining faces, moving the faces of one character onto one plane (which looked incredibly ugly), etc and now I'm just out of ideas to try.

If possible I wanted to use the text object as boolean object for the cone just so that I'm able to alter the carved text before I would apply the boolean modifier. Right now I have to alter the text, create a mesh, extrude it and tell the cone to use another mesh fot the boolean. 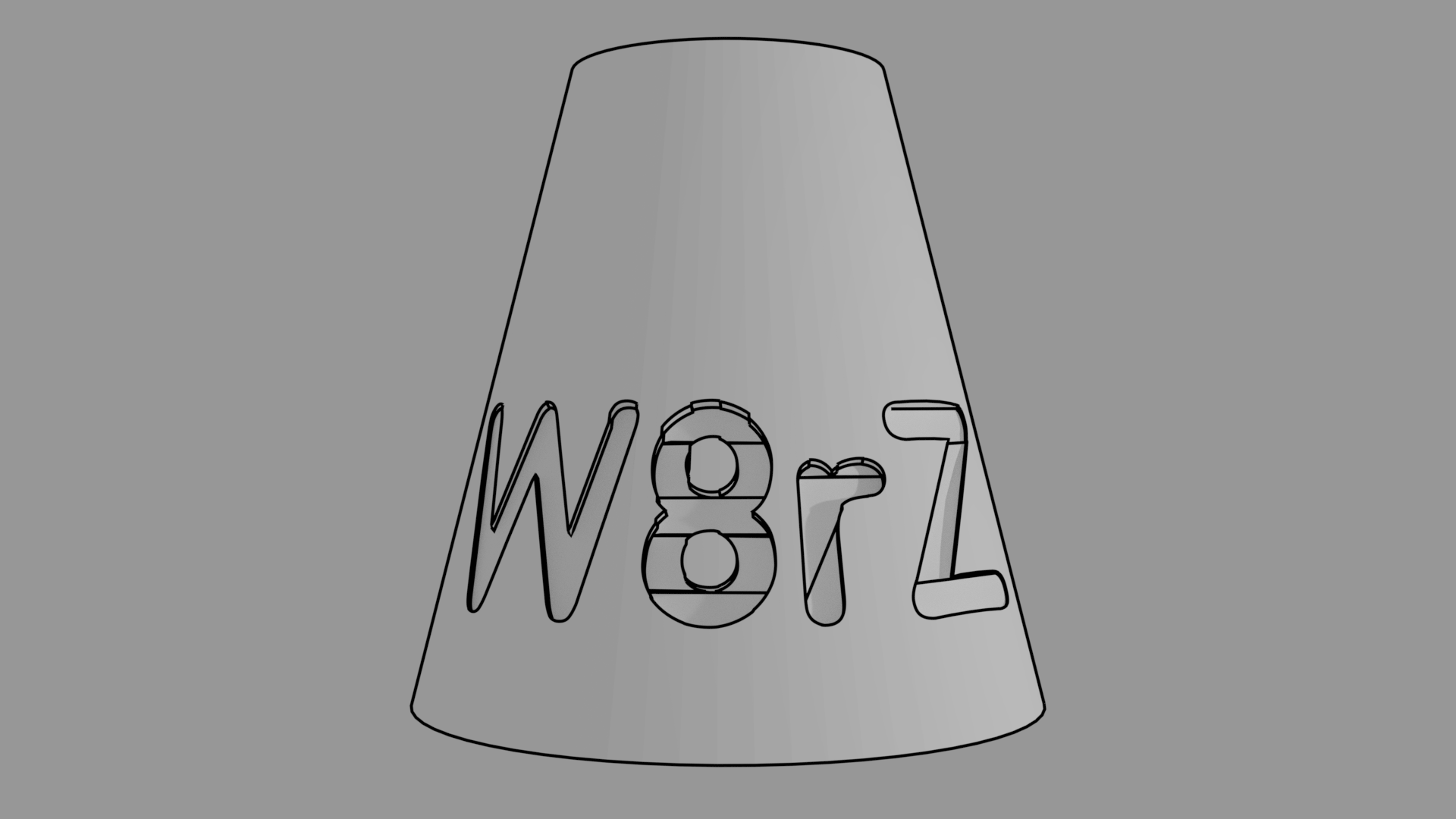 As a reminder (and also the part I don't understand): The "W" as well as the "8" and the "r" do have more than once face for the text/font-mesh. However, while the "W" looks fine, the others don't 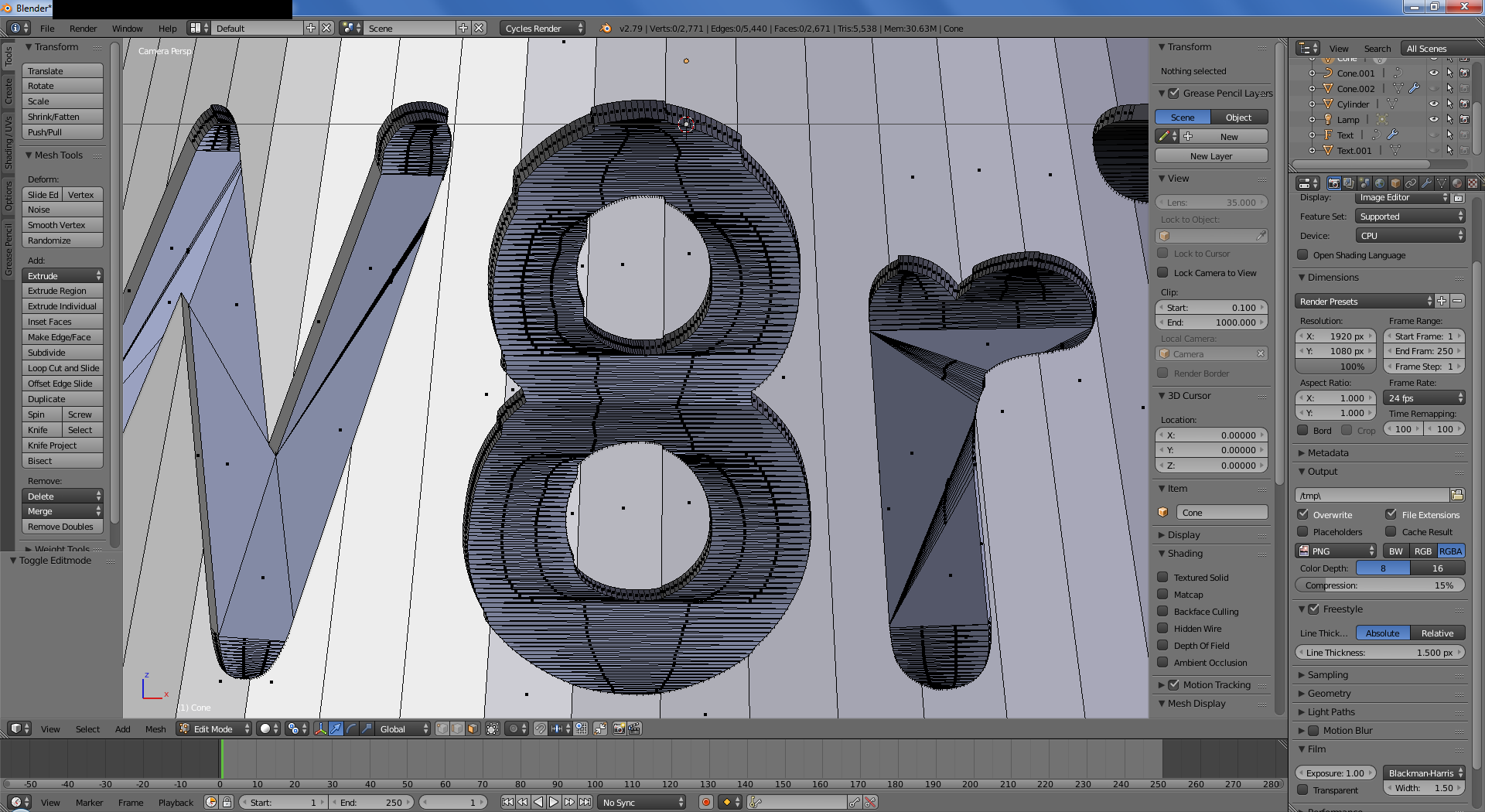 BTW: Before I forget it: I'm using the font "Normalise Din MN". Maybe it matters, but I don't think so, because I get similar results withe the default blender font.

Browse other questions tagged rendering modifiers text-object or ask your own question.

14
Emboss text onto curved surface
14
What's the simplest way to wrap extruded text around a cylinder?
1
Inscribing text into an object
1
Engrave Text onto an irregular surface

7
Is it possible to bevel a text mesh
1
How can I edit text object properties with a script?
3
(BGE) How to have a random font for each character in a text object?
6
Inserting a ❤ symbol into text
1
How can I color a text?