I'm looking into the Blender Video Sequence Editor to create animations out of existing sequences of images. The image sequences are generated with POV-ray. I've downloaded Blender 2.79, I run W7 64-bit.

So far my main source for learning about the Blender VSE has been the series of Youtube tutorials by Mikeycal Meyers. Other than watching the first videos of that series I have no experience with the Blender VSE.

The shots of the video that I want to create are all looping sequences. For instance, the shot that I'd like to render for my first try is a sequence of 240 frames (sequentially numbered PNG files). Designed to loop around the last frame connects seamlessly to the first frame.

With Google as my friend I succeeded in importing the 240 sequence of images into the Blender VSE. Using Shift + D I can create a duplicate of the image sequence, and when I drag that to the right the duplicate appends itself after the last frame of the original image sequence.

At that point I got stuck.
To test I would like to render a 480 frame animation; two repetitions of the image sequence. But after the dragging the 'Edit Strip' says the 'start frame' is 240. What I need, of course, is that the 'Start Frame' remains 0, and that the 'Length' increases to 480. I tried editing the 'start frame' field. But when I do that the VSE bumps the duplicate from Channel 1 to Channel 2, so that doesn't work.

So my question is:
Is there a way to render a sequence of multiple duplicates of an image sequence as a single animation? For many of the shots of the video that I have in mind the animation needs to loop multiple times.

You just need to update the "final frame" of the rendering range, to make it fit your whole sequence: you can set it in the timeline header, or in the main "render"properties panel.

If you're using N chained copies of your sequence of X frames, just put "N*X" into that field and press enter: blender will calculate the final number and render that amount of frames... 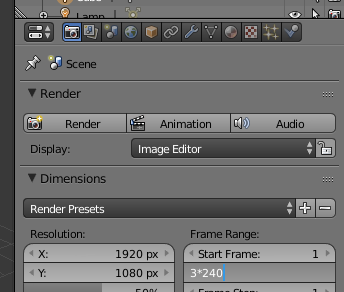 the result will be 720 frames, enough to contain your looped sequence in the final rendering.

Not the answer you're looking for? Browse other questions tagged video-sequence-editor looping or ask your own question.

2
Compositing versus video sequence editor for combining video file with own animation
4
Color differs from Cycles render in Video Sequence Editor
2
Why does the frame range setting behave differently when using multiple scenes in the Video Sequence Editor?
2
How can I see a preview of the sequence of PNGs in the VSE?
10
How to avoid gradient banding while using a video sequence editor?
1
Blender VSE - import multiple rendered PNG frames?