I now have the desired z-transforming camera, the second part of my question is: I would like a sphere to be able to roll on top of the wavy plane due to the wave motion of the plane. I can't seem to get the sphere object to make contact with the wavy plane during animation. The ball should rise and fall with the wave, and also roll due to gravity when the wave is vertical under the ball. I have it close, but the ball is going through the wavy plane.

Please visit http://gph.is/2EpCrto for a better gif picture. The ball's y-transform is locked because it kept going off the side. The plane's and ball's rigid body source includes all modifiers via "final" mode. There is no collision modifier yet applied to the ball. 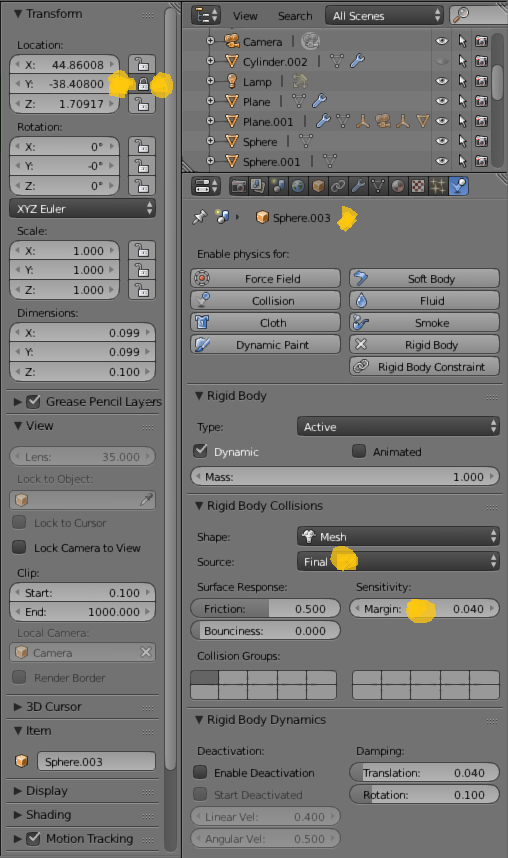 The Blender Docs mention something that could be of help: "The changing collision shape is available also with Change Shape button in the Physics tab of the Tool Shelf." https://docs.blender.org/manual/en/dev/physics/rigid_body/properties.html#rigid-body

Answered - ::I would like to modify a mesh, either a plane or cube, to have a wave modifier. I would like an object to rest on the surface of this wavy plane and receive forces from it. Basically, I want the object to transform its Z-location value (Z axis is up) based on the waves of the plane. I do not wish to use the Ocean modifier.

So far, I've had minimal success; the wave-riding object seems to accept vertical forces from the waves but it's awkward, unrealistic, and just not right. What's the right way to have a stick-mounted camera move up and down with the waves?

Create an empty where your object touches the surface. It's usually good to have an inbetween empty for additional freedom.

Go into edit mode of your mesh with the modifier.

Select the empty with CTRLLMB. Then select 3 verts of your mesh that are close to the point where the object swims.

Now that's not exactly forces acting on the object, but the parented empty does what the 3 verts tell it to do. Now you can parent anything to the empty and adjust it.

If you use only one vertex as parent, rotation will not be taken into consideration and the empty will only be moved.

You could be even more flexible by having several empties with several single vertex vertex parents and then use constraints between the empties to handle the rotation of the master empty that bears the camera.

This technique is not a physics based simulation, it is just a fake approximation but might yield what you are after.

Add a Shrink Wrap modifier to it and set it to Project mode. Make sure you tick the Negative option if necessary.

This will make your object stick to the waving surface. Now just parent whatever object your want to this plane and use Duplifaces from the Properties Window > Object Tab > Duplication > Faces to duplicate it at the face center.

Not the answer you're looking for? Browse other questions tagged animation camera physics or ask your own question.

2
how to make rigid body react to the wave modifier or animated shape keys in blender ? (Or let's say animated vertices/faces if that matters )
0
Hair Particles - Can I recalculate the initial rotation every frame?
1
How to create a rope
0
Map array modified objects to underlaying surface

3
How do I replace the player with a rigid body object? BGE
1
Wave-Modified Collision Object Not Changing
0
Why doesn't rigid body physics work properly after I add the Build modifier?
2
How to make dynamic paint work with rigid body interactions during animation playback
0
What might be wrong with ball and chain physics here (chain works but the ball detached with similar settings)?
1
How to apply collision physics without destruction?