I have a complex mesh that I am giving custom Normals to via the Data Transfer modifier. The normals are coming from a simpler mesh.

Is there any method to get at the original normals still? Or a way to modifiy the True Normal in the material to be smooth shaded?

For a static model, this could be achieved by baking either the original or custom normals to a texture and using that. But that is not an option for meshes that deform as far as I can tell?

Animation Node can be used to assign vertices normals to vertices colors in near realtime. Using those normals in cycles won't yield the same results as the Phong smooth shading cycles uses, however it provides very similar results.

The name Vertex Color is a bit misleading, it should be noted that color data is not stored per vertex, but rather per loop. A loop is basically a vertex of a polygon, so if a vertex is part of four polygons, it will compose four loops, to understand this better, lets look the following illustration: 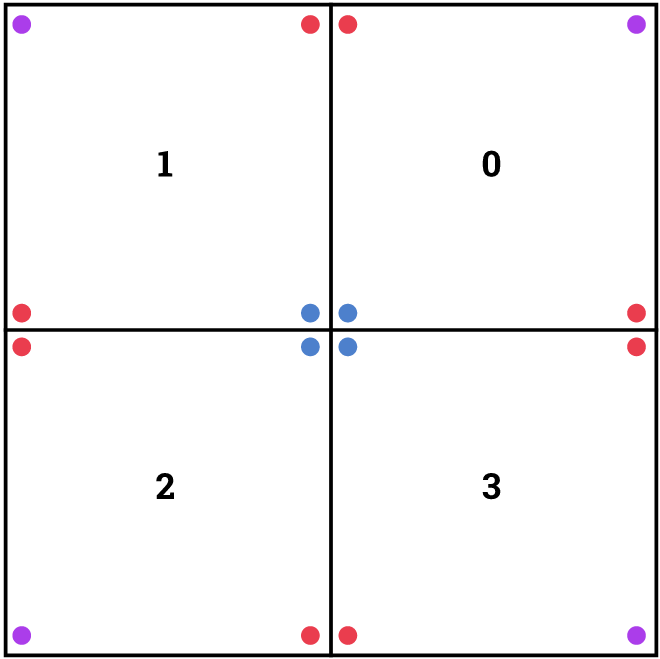 The above is a mesh with 4 polygons, each polygon has 4 vertices and subsequently 4 loops. We represented loops by colored dots, you notice that each vertex compose either 4 loops as blue loops, 2 loops as red loops or a single loop as violet loops. Now, If we were to color all loops white expect the blue loop in polygon three, we will get something like this: 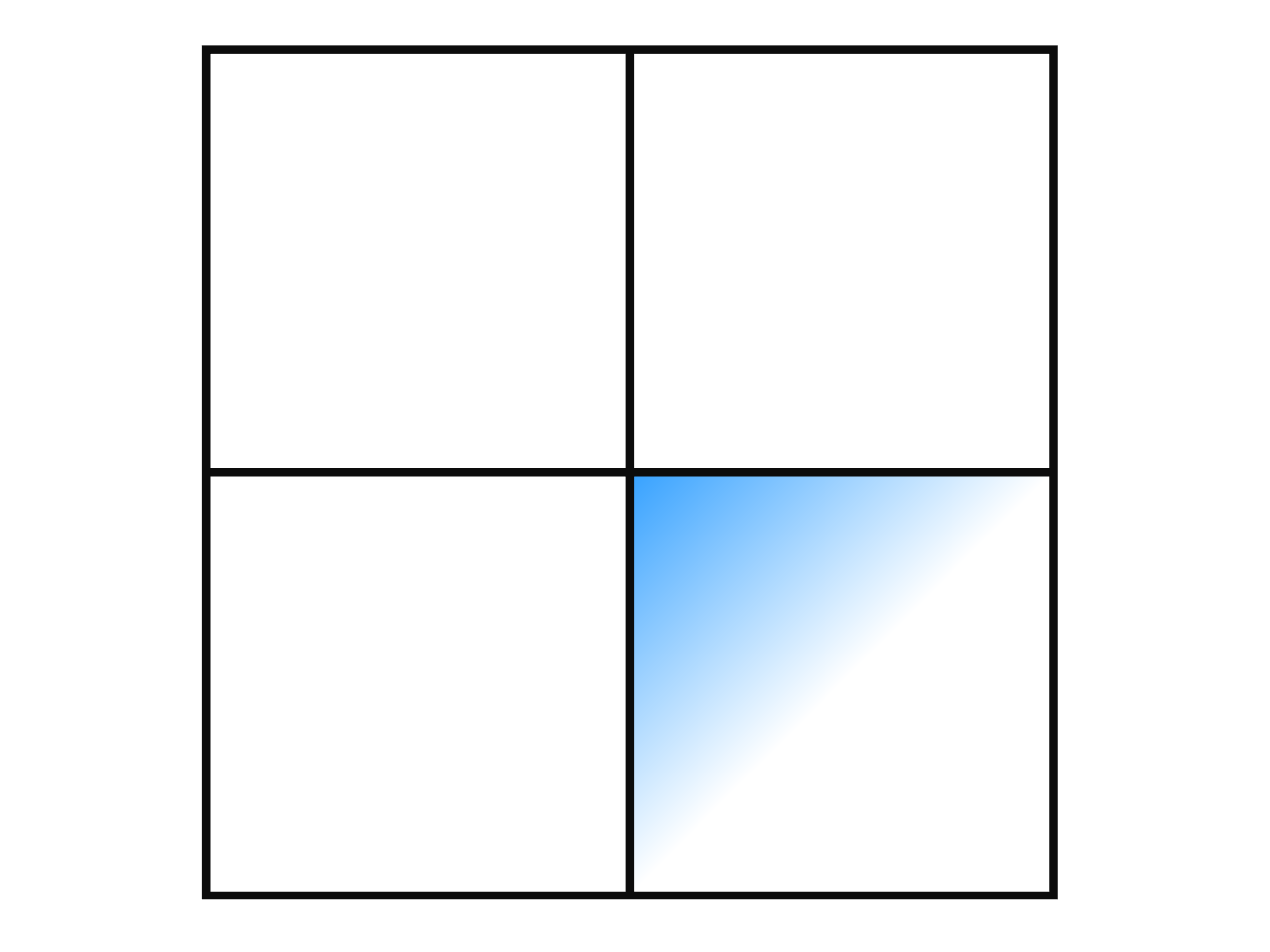 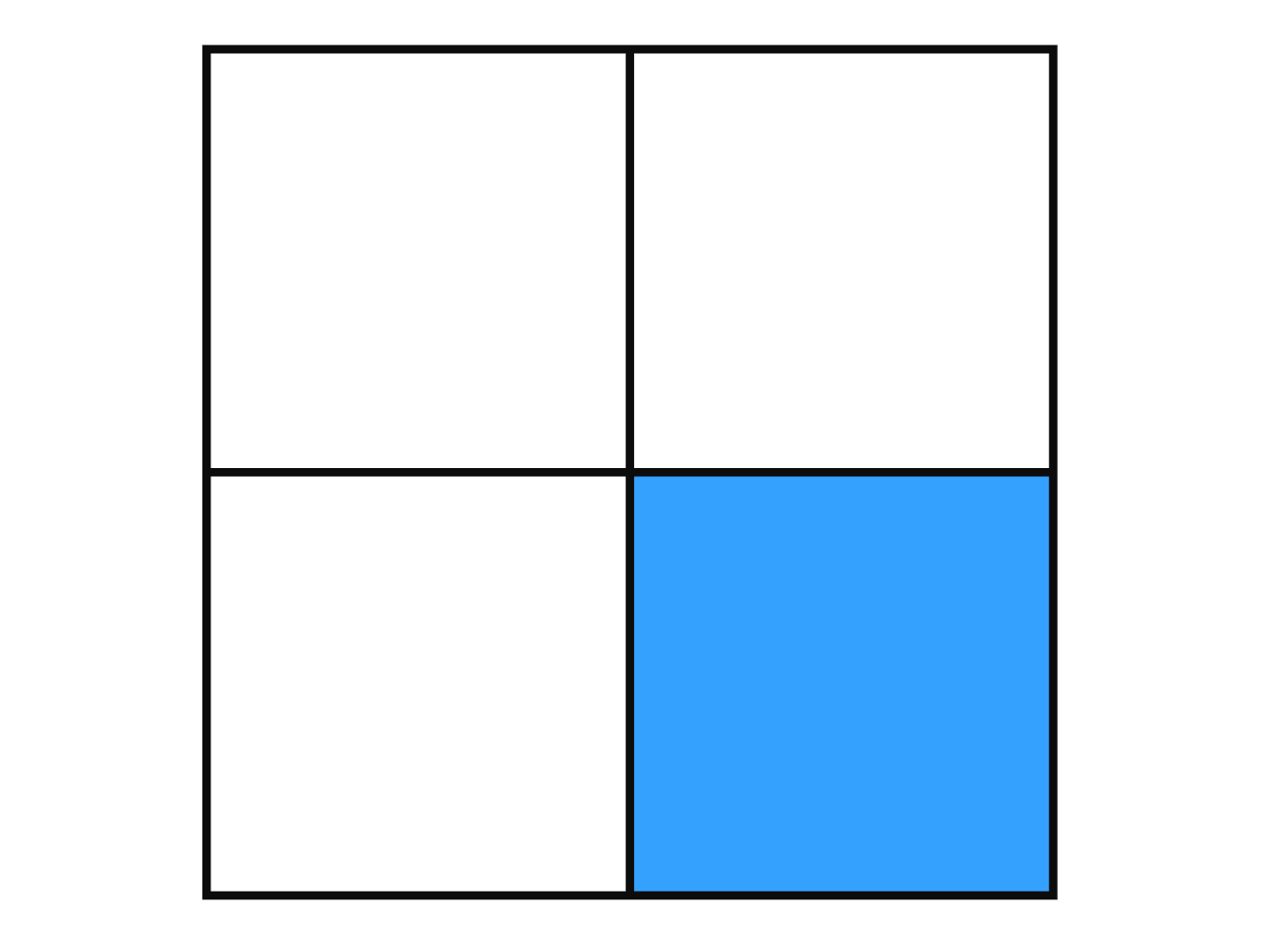 On the other hand, to color a vertex, we have to color all loops that are part of the vertex, same-color dots in the above illustration: 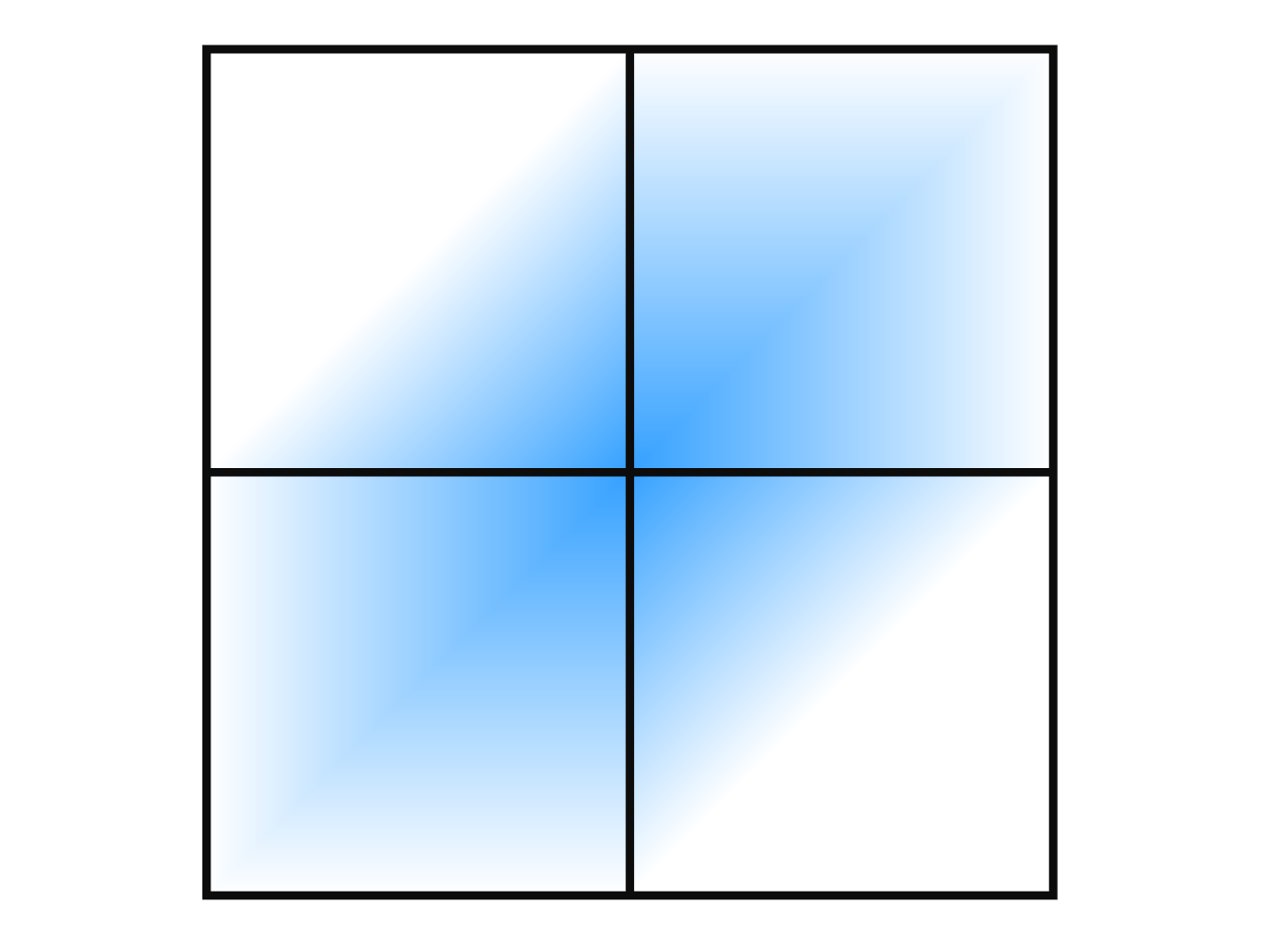 In case of coloring vertices, the fragments (pixels or dots) in polygons will be colored according to a convex combination of the colors of its vertices (a bilinear interpolation for quads), such interpolations are particularly useful to represents smooth shading in your case !

So if we were to color vertices based on some color list, we will have to identify the loops that are part of each vertex (same-color dots in our illustration) and color those loops based on corresponding color from the color list. We will also explain polygon coloring for completeness.

Understanding How Loops Are Stored In Meshes

Vertices have indices which we can use to identify and select them by, the same goes for polygons and edges. How are loops ordered and how can we identify them? To answer that, let us consider this simple cube as a study case: 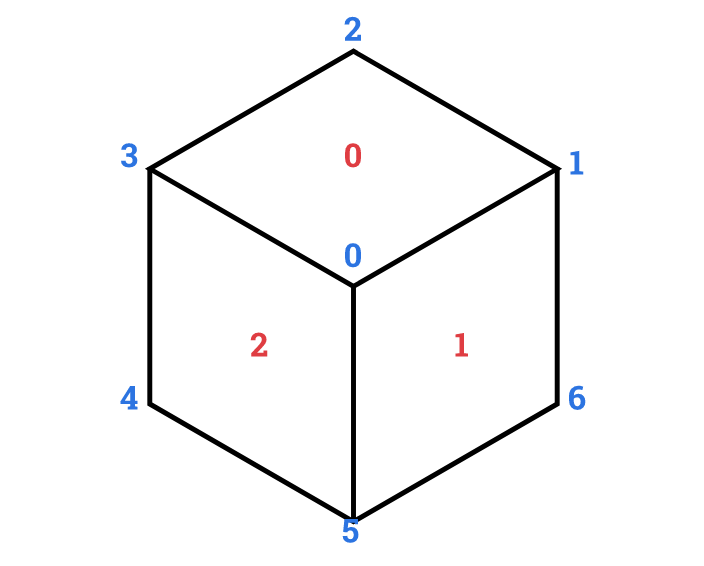 We can represent the loops as an ordered pair $(x, y)$ where $x$ is index of the polygon it is part of and $y$ is the index of the vertices that it is composed of, and the set of ordered pairs for quadrilateral mesh will be:

To understand this better, we drew the indices of the loops over the study case : 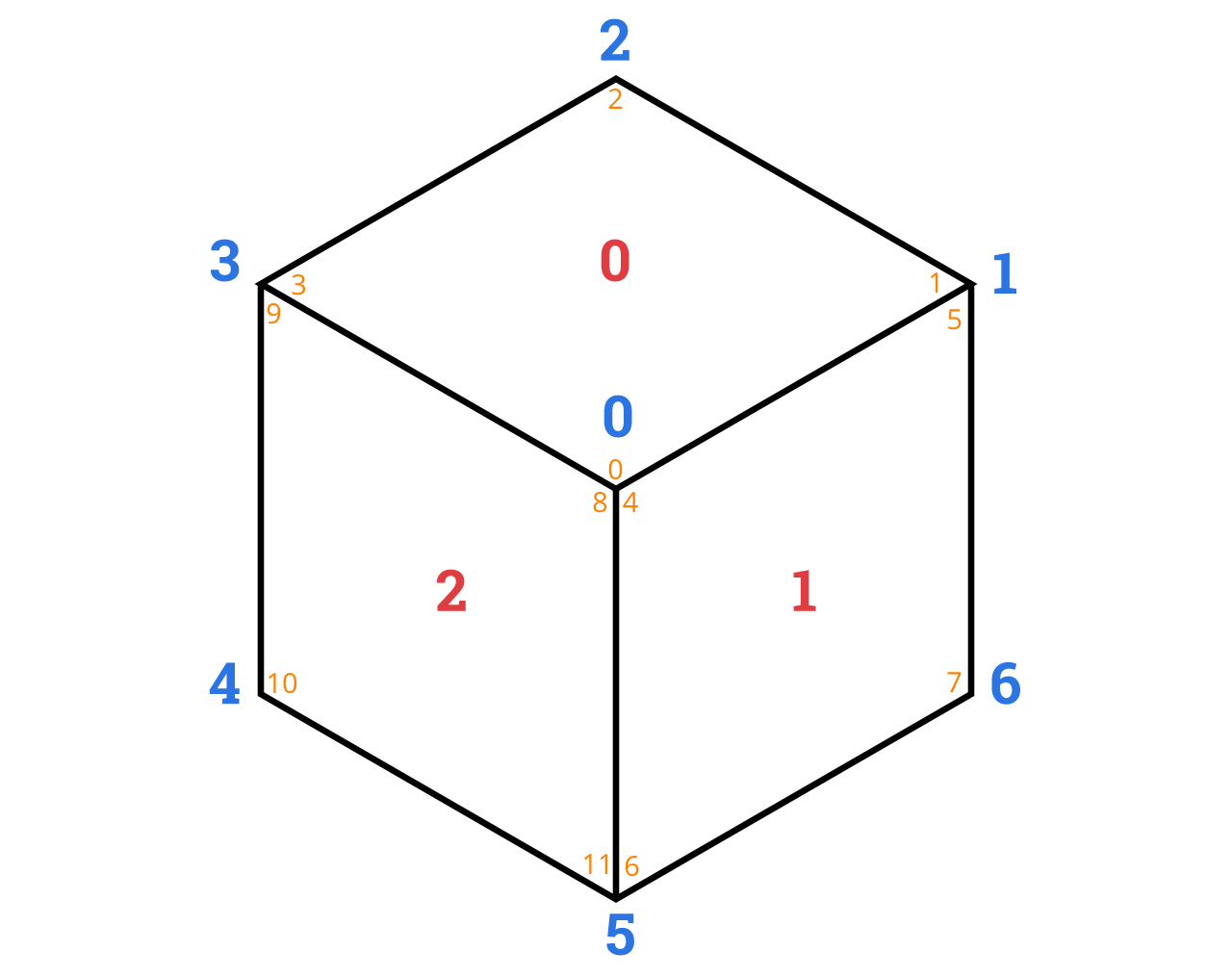 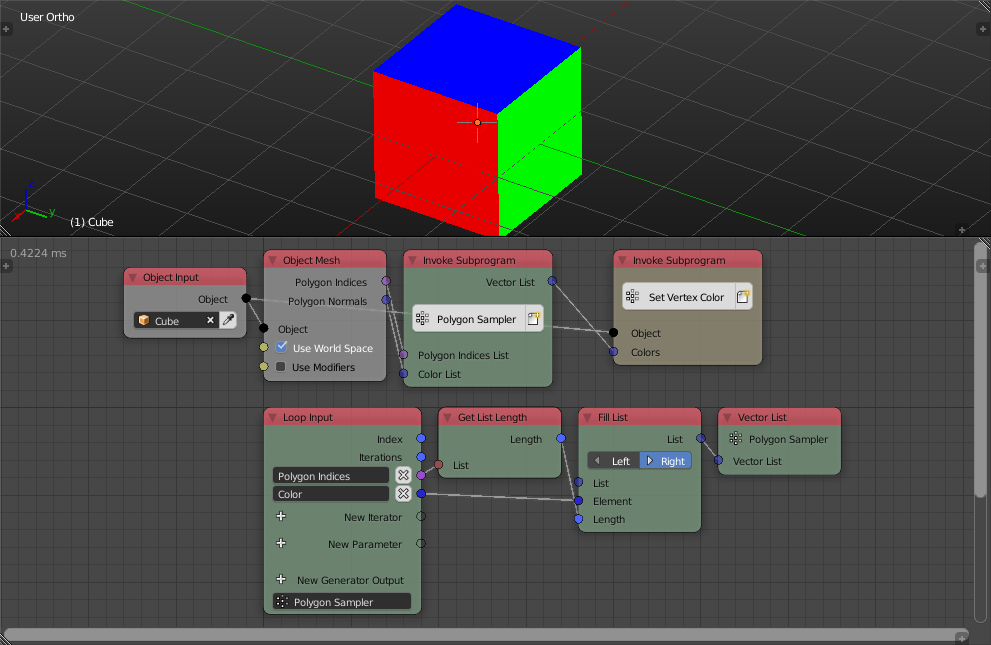 Don't worry about the Set Vertex Color Subprogram, we will study it in a second. Notice that we used the polygon normals as colors in here. Also, we represent colors using 3D vectors; because they in fact are (Vertex Color doesn't support Alpha Channel).

Vertices coloring is a bit harder to understand but easy nonetheless. Lets look at the study case one more time:

Remember that in order to color vertices, we have to color all loops that compose that vertex, in the above case, $(0, 4, 8)$ should have the color of the vertex at index zero, $(1, 5)$ should have the color of the vertex at index one, and so on. Notice that polygons are merely an indicator of which vertices are in each polygon, now remember that loops are stored in the same order of polygons, so the algorithm for generating the loops colors is as easy as looping (iterating) over polygons, using the indices of the polygon to get the colors at the same indices, append the colors. Take your time to understand it, you will only understand it if you think about it. An implementation in animation nodes is as follows: 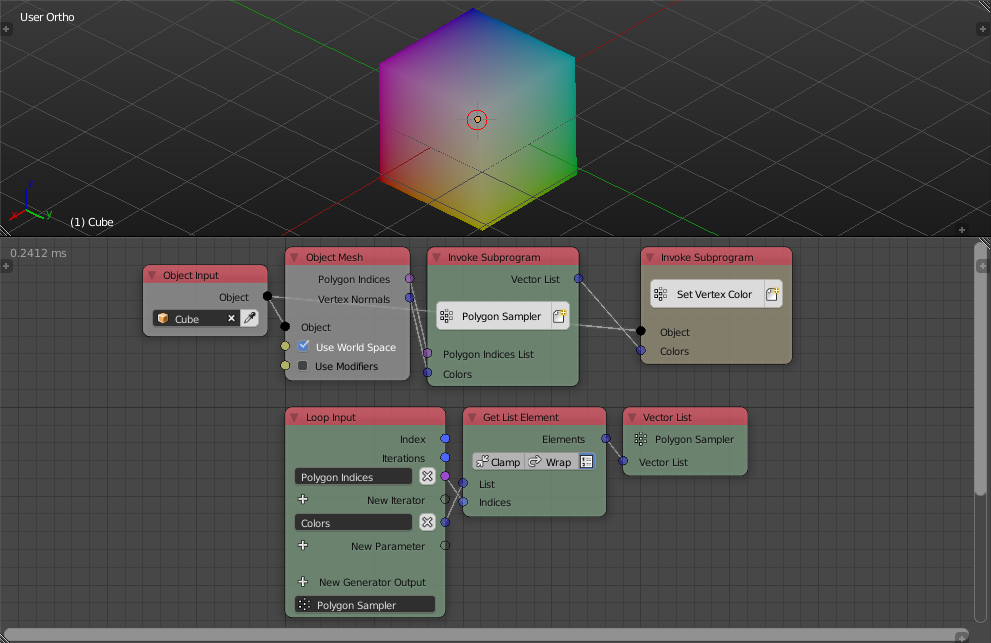 Notice that we use the vertices normals as colors in this example.

Animation Nodes currently does not have a node to set vertex colors directly, so we will have to write a small script to do that, a possible way to do it is as follows:

The script creates a vertex color layer named Normals which is then filled with the data from the Colors list, the Colors list is a 3D Vector list of $n$ Vectors, where $n$ is the number of loops in the mesh.

You probably already know how to set the vertex normals to vertex color map by now, we did it couple of time above, so such a node tree should achieve what you want:

Not the answer you're looking for? Browse other questions tagged cycles-render-engine materials modifiers nodes normals or ask your own question.

7
Animation nodes for geometry line art?
5
can we send vertex info to voronoi texture node to create texture
6
Cycles: Generate 3d coordinates before modifier stack is resolved
1
Is there a way of setting vertex colors per mesh in an object output node?

1
Normals messed up after applying transform
5
double sided polygons in BGE
1
Multiple instances of same image node?
1
How to edit a split vertex normal without affecting others?